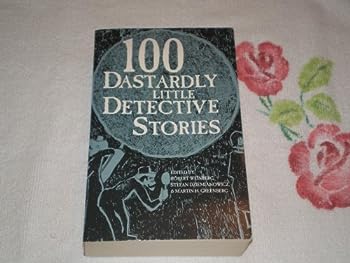 Match wits with great detectives, devious criminals, and some of the finest minds in the all-time annals of detective literature. From crime-suspense (Tom Curry's "The Sign") to hard-boiled fiction... This description may be from another edition of this product.

fun to just pick up and read

Published by Thriftbooks.com User , 13 years ago
"100 Dastardly Little Detective Stories" selected by Robert H. Weinberg, Stefan Dziemianowicz & Martin H. Greenberg, © 1993 There are so many stories in this book I do not know if I read them all. It was fun to just pick up and read for ten or fifteen minutes a story, sit back and think about what happened in it, and read the next one. The pause to think is important because the stories are so good you want to savor the situation, the conclusion, the characters, etc. Some of the stories were a bit confusing, but not so much that you had to reread them to understand what happened, but just enough to make you ponder the story more to make sure you got it right. I would comment on all the stories, but the number makes that unmanageable. The quality of the stories is superb. Every story has you rooting for the hero and you, sort of, know that the hero will really win through, either killing the bad guys or finding the killer or robber. The oddest author is Abraham Lincoln. The oddest placement is "Anchor the Stiff," page 27, which is way before the story "A Friend of Davy Jones,'" page 218. The arrangement of stories is alphabetical (Anchor is before Friend), but these two stories the second, in the character's time line, should be first. Of course, there a numerous Sherlock Holmes stories or knock offs (Shamrock Jolnes, Thinlock Bones, etc.). The oddest, and one of the confusing stories I mentioned, is "The Stolen Cigar-Case" by Bret Harte(!!?? did he not write westerns), with Hemlock Jones of Brooks Street, as the detective. It makes some fun of the power of deduction and what not that is Sherlock Holmes' peculiar penchant, but in the end you realize that it was all true and you have to stop to reread the ending to realize Mr. Jones was right in his deductions. There were times when I would pick a story out to read and realize that I had read it once or even twice before, but that was okay, because they were really interesting and worth reading again to find the killer and they are not long stories to read.

Published by Thriftbooks.com User , 21 years ago
The 100 stories in this book cover just over 150 years of writing and writing styles. The earliest was written in 1843 by an up and coming young politician. The young mystery writer was named Abraham Lincoln and, I'm afraid, that it was his name, not the quality of his piece of fiction, that warranted its inclusion in this anthology. It's not that bad, but it's more of a story of a near miscarriage of justice than one centering on detectives or good detection. In Lincoln's favor, however, is that the fact that the genre was still in its infancy, this story having been written only a very few years after Poe, the first writer of the real short mystery fiction had introduced the first fictional detective, C. Auguste Dupin.I have to admit to being somewhat puzzled by the conclusion drawn by another reviewer of this book who has opined that the book "doesn't deliver on its premise." What it promises are short detective stories of a scope covering the last century and a half which have been written by a number of the better writers of that period. This is exactly what it delivers.There are stories written by James M. Barrie (he of "Peter Pan" fame), O. Henry (who practically invented the surprise ending and is probably best known for "Gift of the Magi"), Charles Dickens, Jack London, Bret Harte, and on and on.Writing styles change with time and the detective genre is no exception. A number of the stories are written in the first person, the narrator being the hard-boiled type who refers to all women as "this dame." In contrast, some of the protagonists are thoughtful and analytic while others are gentlemanly men of action.I never like to end a review of an anthology without picking out at least one selection and telling a little about it. Here goes: "Murder at Rose Cottage" by Edward D. Hoch is a rather genteel British murder mystery. Although of rather recent vintage, it has the feel of something written in an earlier era. There is a murder, but it takes place "off-stage" and there are no gory descriptions or depictions of acts of violence. The murder is solved by an inspector from Scotland Yard who uses deductive reasoning and common sense to figure out "who dunnit." I was impressed by his attitude when he stated that "Death threats are always important." In early twenty-first century America, it is my impression that the prevailing police attitude is that no threat to a common person is worth investigating. "If there's a warm body, we might deign to take a look" seems, to me, to better describe the reaction that one would probably run into. Wouldn't it be nice to live in a world, like the one in this story, where authorities consider keeping us common folk alive every bit as important as catching and prosecuting a suspect in a celebrity crime?The depiction of those simpler days of more caring attitudes is one of the things that gives this book its charm. As I've stated about a few other book
Copyright © 2022 Thriftbooks.com Terms of Use | Privacy Policy | Do Not Sell My Personal Information | Accessibility Statement
ThriftBooks® and the ThriftBooks® logo are registered trademarks of Thrift Books Global, LLC