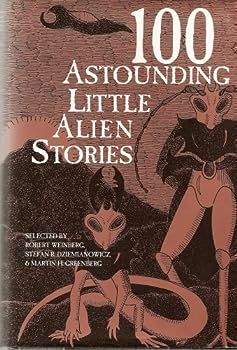 First edition. Near Fine in DJ. A few minor dust spots This description may be from another edition of this product.

Published by Thriftbooks.com User , 13 years ago
Some great authors and some great stories. I really like the short short story and these authors do it well. I recommend this book to all fans of spec fic or short stories.

Aliens from A to Z

Published by Thriftbooks.com User , 14 years ago
A fine collection of very short stories, most averaging about six pages. The selections span stories culled from both leading and relatively unknown short story publications and collections of the twentieth century. While most stories are from the latter half of the twentieth century, a few earlier classics from H. P. Lovecraft are included as well as as several gems from the Golden Age. Stories included are: All Cats Are Gray by Andre Norton, And So On, and So On by James Tiptree, Jr., A Bad Day for Vermin by Keith Laumer, The Beautiful Doll Caper by William F. Nolan, Beyond Lies the Wub by Philip K. Dick, The Big Trek by Fritz Leiber, Blood Lands by Alfred Coppel, Brave New Hamburger by Philip Sidney Jennings, Capsule by Rosalind Greenberg, The Client from Hell by Richard Curtis, Collector's Fever by Roger Zelazny, The Crawling Chaos by Elizabeth Neville Berkeley and H. P. Lovecraft, Crazy Annaoj by Fritz Leiber, A Cup of Hemlock by Lee Killough, The Dark and the Damp by John DeChancie, Dear Pen Pal by A. E. van Vogt, The Demon and the Flower by Clark Ashton Smith, Disguise by Donald A. Wolheim, Dog Star by Jack Reynolds, Doing Alien by Gregory Benford, Down the Digestive Tract and into the Cosmos with Hantra, Tantra, and Specklebang by Robert Sheckley, Dry Spell by Bill Pronzini, Dueling Clowns by Barry Longyear, Emergency Refueling by James Blish, Eripmav by Damon Knight, Evensong by Lester del Rey, Exile by Edmond Hamilton, The Exterminator by A. Hyatt Verrill, The Eyes Have It by Philip K. Dick, Feeding Time by James E. Gunn, The Finest Hunter in the World by Harry Harrison, The Flame Midget by Frank Belknap Long, Jr., Gift of U'Thang by Basil Wells, The Good Neighbors by Edgar Pangborn, The Grapes of Rath by jan howard finder, The Great God Awto by Clark Ashton Smith, The Great Slow Kings by Roger Zelazny, The Green Meadow by Elizabeth Neville Berkeley and H. P. Lovecraft, The Grof by Philip Sidney Jennings, The Happy Traitor by Morris Hershman, The Harvest by Tom Godwin, How Now Purple Cow by Bill Pronzini, The Hurkle Is a Happy Beast by Theodore Sturgeon, An Incident on Route 12 by James H. Schmitz, Interstellar Way-Station by Bob Tucker, Into Your Tent I'll Creep by Eric Frank Russell, Itself! by A. E. van Vogt, Kindergarten by James E. Gunn, The King of the Beasts by Philip Jose Farmer, Landscape with Sphinxes by Karen Anderson, The Last Men by Frank Belknap Long, Jr., Last Warning by Mack Reynolds, Later Than You Think by Fritz Leiber, The Life Hater by Fred Saberhagen, Linkage by Barry N. Malzberg, Listen, Love by George Zebrowski and Jack Dann, Mail Supremacy by Hayford Pierce, Man of Destiny by John Christopher, The Man Who Came Back by Brian M. Stableford, The Martians and the Leadfoot by William F. Nolan, A Matter of Taste by Esther M. Friesner, The Mission by Arthur Tofte, Mister Magister by Thomas F. Monteleone, Mr. Iper of Hamilton by Carl Jacobi, Open, Sesame! by Stephen Grendon, The Opening by Bruce Boston, The Other Tiger b
Copyright © 2022 Thriftbooks.com Terms of Use | Privacy Policy | Do Not Sell My Personal Information | Accessibility Statement
ThriftBooks® and the ThriftBooks® logo are registered trademarks of Thrift Books Global, LLC