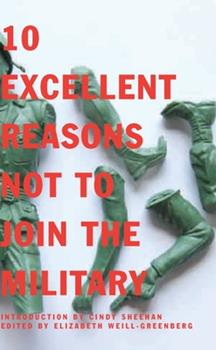 10 Excellent Reasons Not to Join the Military

So you're walking out of school and parked at the gate is a new, bright red Ford Mustang with a hulk of a man in the front seat. He's sporting a razor cut and wraparound shades. Before you can pass he's out of the car and blocking your path. Mind if I take a minute--he has you by the arm now--to tell you about the great life in today's Army and why you should seriously think about signing up? The armed forces are having a tough time attracting new...

Published by Thriftbooks.com User , 13 years ago
I am a Vietnam vet, but I won't get fooled again. I found out the war I was fighting in was not for the good old red, white, and blue, but for Phillip Morris Cigarette Company, who wanted to sell their poison to North Vietnam. So 50,000 young men and women died in a capitalist inspired cigarette war. The military is nothing but ignorance. Even at age 17 (when I joined) and fresh out of high school I could see that those who made the military a career were not the most patriotic people in our society, but rather the dumbest. I was dumb for joining, too, but at I learned from my experiences. I have no idea how any war veteran can keep spewing that War Is Good and My Country Right or Wrong crap. I truly believe everything "10 Excellent Reasons Not To Join The Military" and I hope this book reaches as many readers as possible, especially the naive kids around the age of 17 to 25 who are prone to fall for that slick military advertising they now put on TV. If the military is all we have to offer our kids, then this country needs a major overall (I believe President Obama thinks so, too). We have to flush out the hate mongers like Bush and Cheney and Beck and that fat show host, Rush, and learn to live peacefully. Of course, it's going to take good leadership, and that God we finally have just that. Just Say No to The Military should be America's new motto. Share this book with every young man and woman you know. It could save their lives.

Published by Thriftbooks.com User , 15 years ago
A MUCH NEEDED BOOK! The Bu$h Administration lies and soldiers die! They have destroyed the military for at least a generation maybe more. Don't join the military! It's not worth it.

The pioneers of a warless world...

Published by Thriftbooks.com User , 16 years ago
"The pioneers of a warless world are the youth that refuse military service." -Einstein Lately the U.S. military's small army of professional recruiters have landed on hard times. The military has crashed hard upon the rocks of quagmire Iraq and fewer people want to join the armed forces today than in order a decade. And if Cindy Sheehan and Elizabeth Weil-Greenberg have their way, 10 Excellent Reasons Not to Join the Military will add considerably to the military's difficulties. The sane person's response to the unnecessary bloodshed in the Middle East is to bring our loved ones home now. Instead, Congress and the Pentagon have chosen to swell the ranks and budgets of military recruiters in order to accommodate hundreds of stationary and mobile recruitment centers operating at once across America. 10 Excellent Reasons is the peace movement's response to the war machine targeting our youth. It sheds light on the many drawbacks to military service from "you may be killed" to "you may kill others" to "you may face discrimination" and beyond. Each contributing author makes his or her case through the hard facts and true-life horror stories that never make their way into Army television ads. Todd Ensign's chapter vividly describes the dangers that await soldiers who survive their tour(s) of duty in Iraq: "Thousands of Iraq and Afghanistan vets are returning home badly wounded by psychological trauma as well. Military officials estimate that up to 30 percent of all soldiers who serve in Iraq will suffer some level of mental trauma...17 percent of Iraq war vets interviewed showed signs of Post-Traumatic Stress Disorder (PTSD)...Flashbacks and intense nightmares are common symptoms of PTSD. Sufferers often resort to alcohol or drug abuse in an effort to get some relief." (74-75) This pocket book is really worth its wait in gold because it brings together everything the antiwar movement has said all along. This book deserves to be on a lot of people's reading lists: High school students and their parents, high school counselors and counter-recruitment activists. Here's hoping for a direct correlation between the sales of this book and the decline in enlistment. Those slick military recruiters have their handbook, do you have yours?

TOP 10 REASONS - As if you didn't already know.

Published by Thriftbooks.com User , 16 years ago
1. You May Be Killed - By Cindy Sheehan Cindy Sheehan's son, Casey, was killed in Iraq on April 4, 2004. In this chapter she chronicles every parent's worst nightmare -- outliving a child. To spare any more parents her grief Cindy demands that the US withdraw from Iraq immediately. "Don't join the military. The recruiters lie. They never tell you that you may die and put your mom in hell." 2. You May Kill Others Who Do Not Deserve to Die - By Paul Rockwell While the Iraq war may have been sold as some deranged humanitarian mission to help the Iraqis, Paul Rockwell interviews soldiers who committed or witnessed acts of murder and torture against civilians. "They opened fire on the prisoners with machine guns," Iraq war veteran Aidan Delgado told Paul Rockwell, of a protest at Abu Ghraib prison where he was stationed. "They shot twelve and killed three. I talked to one guy who did the killing. He showed me grisly photographs and bragged about the results ... I was stunned and said, 'You shot an unarmed man behind barbed wire for throwing a stone.' He said to me, 'Well, I said a prayer, and I gunned him down' ... He was the nicest guy, a family man, a courteous devout Christian." 3. You May Be Injured - By Robert Acosta and Nina Berman Nina Berman traveled the country photographing and interviewing soldiers who had been injured in Iraq. Photos like Berman's don't show up in Army pamphlets. One of the soldiers she met was Robert Acosta, who had his arm blown off when he went to buy sodas in Iraq. Since Robert's return home he has become an antiwar activist and travels the country speaking. "I met one soldier who was living alone in a trailer, completely blind, without a leg, shrapnel wounds covering his body. He has no parents to take care of him and spends his days with young kids who ride around in circles on ATVs on a dead-end road in one of the poorest counties in the state. On the anniversary of his injury, he was found wandering at night through the woods in what local news reports said was an apparent suicide attempt. Do you think the army recruiting commercial that seduced this soldier into joining ever mentioned anything about blindness, amputation, or brain damage?" 4. You May Not Receive Proper Medical Care - By Adele Kubein After Adele Kubein's daughter, a National Guard soldier, broke her leg when her plane was shot down, her commanding officers bullied her into keeping the pain to herself. Finally two months after she was injured another officer saw her limping, sent her to the doctor and she was taken out of Iraq. But once home she still had to endure another battle -- getting medical care for her body and mind. Adele writes: "Most citizen soldiers get discouraged by the long wait for treatment and medical status. They sign away their right to medical care just to get home. They give up and try to deal with their disability through civilian channels, leaving the military off the hook." 5. You May Suff

It Helps to Read Before Reviewing

Published by Thriftbooks.com User , 16 years ago
This is less a proper "review" than a bit of a rebuttal to "FBRobertson," so be forewarned. It is clear from your "review" that you have not read said book. If you had, you would have realized that the book contains no "mockery" of soldiers. Most importantly, there is no "hate" informing this book. The book's aim is clear -- to lay out some facts about the military for those considering joining. The military itself gets to make its case with big-budget ad campaigns. So this book is simply saying, "Look, some really bad stuff might happen to you. They aren't going to tell you about it, but take a look at these peoples' stories." Clearly you were drawn to "review" the book because of the involvement of Cindy Sheehan. So be it. But please, in the interest of honesty, don't start reviewing books you've never read. It does the entire idea of truth a huge disservice.
Trustpilot
Copyright © 2022 Thriftbooks.com Terms of Use | Privacy Policy | Do Not Sell or Share My Personal Information | Accessibility Statement
ThriftBooks® and the ThriftBooks® logo are registered trademarks of Thrift Books Global, LLC