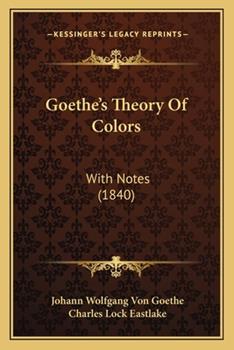 This description may be from another edition of this product. Theory of Colours is a book by Johann Wolfgang von Goethe about the poet's views on the nature of colours and how these are perceived by humans. Published in 1810, it contains detailed descriptions of...

An Existential View of Colour and Sight

Published by Thriftbooks.com User , 13 years ago
Clever, original, speculative. Ideas like Goethe's are the wellspring of new fashions in thought, whether they are 'right' or not. Maybe Newton was supported by better evidence in his analysis of light and colour, but Goethe's views are a study in how the inquisitive human mind speculates on fascinating topics and comes up with answers that demand consideration and respect - whether they are 'right' in reality or just useful as ideas in themselves. This book will provide insights into how we think, not just how we explain phenomenon.

Published by Thriftbooks.com User , 14 years ago
Very impressed to find the book as described either someone was very careful or it didn't get read more than once; either way I am glad.

A fascinating introduction to Goethean science

Published by Thriftbooks.com User , 21 years ago
Johann Wolfgang von Goethe, probably the greatest of Germany's poets, was also an avid amateur scientist and displayed through his careful observations and his keen, what might now be called phenomenological, mind an ability to discern the depth of the phenomenon in question, in this case the origin of colours. In direct contradiction to Newton whose theory of colour formation, based on his earlier prism experiments and their interpretation, was the accepted theory of the time in all scientific circles and laymen alike, with one exception, that of painting and artistic use of colour.Goethe, being fascinated by the colours generated from the prism conducted his own investigations and found to his great surprise that Newton's theory was, if not incorrect, but rather mechanical in nature and based on an "interpretation" of the phenomenon rather than the truth as it stands. Goethe through his investigations into natural phenomena gave rise to the idea of the archetypal phenomenon or Ur-phenomenon, in this case meaning the movement or active form present in the phenomenon which gives it its character rather than some static image such as a Darwinian ancestor. Goethe noted that it is possible to actually experience the fullness of the phenomenon ie the coming into being of the colours themselves and that the human being can not only theorise in the conventional sense of Kant but can in fact truly know the phenomenon as it is. Contemporary science as it also was then does not acknowledge such a possibility. The book is basically a written account of experiments done by Goethe on the generation of colour in natural events and his own experiments to bring to the fore the ground of all colour generation. It displays great care in his observations and it gives a wide ranging explanation of colour in the sciences, the arts such as painting and also deals to some degree with the experience of colours in the physiological domain. It is all encompassing in its attempt to understand the colour phenomenon in all of its many incarnations. It is convincing in its comprehension of colours and yet at times leaves one dissatisfied because it lacks mathematical rigour or measurement that is characteristic of science today. This habitual way of thinking present in scientists is rather hard to dislodge even when the mind is open, the main reason for this being the hard edged practicality of such an approach.I would think that Goethe's book can be looked at as an introduction to his way of doing science and as a first attempt to fathom the real depth of the phenomenon which is inherent in his approach and sorely lacking in "normal" science. Naturally, this does not mean scientists themselves haven't used similar approaches, the names of Faraday and his investigation of electromagnetism and Heisenberg in his description of the limitation induced by the scientific method to the investigation of natural processes, come to mind. It is

Published by Thriftbooks.com User , 22 years ago
This was a book for a class I'm taking. It's very interesting. I totally recommend it.
Copyright © 2020 Thriftbooks.com Terms of Use | Privacy Policy | Do Not Sell My Personal Information | Accessibility Statement
ThriftBooks® and the ThriftBooks® logo are registered trademarks of Thrift Books Global, LLC