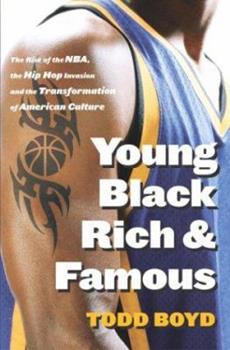 Young, Black, Rich and Famous: The Rise of the NBA, The Hip Hop Invasion and the Transformation of American Culture

In this controversial look at the impact of cutting-edge black urban culture on contemporary America, Dr. Todd Boyd, the man CNN deemed "the hip-hop professor," uses the intertwining worlds of basketball and hip hop as a powerful metaphor for exploring the larger themes of race, class, and identity. In the 1970s, as a direct result of both the civil rights and the black power movements, black popular culture became a visible, influential presence...

Published by Thriftbooks.com User , 16 years ago
Using the tools of a critical theorist, Todd Boyd sets out to analyze the quest for freedom of expression and existence, as it is played out on the basketball court and within the Black cultural renaissance of Hip-Hop music. American basketball, as it is played and lived by young African American men and Hip-Hop culture both resist being co-opted by mainstream America. They have both moved from the purlieus of the larger American popular cultural purview to occupy a unique space at the vortex of the American global marketing machine. Within this framework, America and the world, are live witnesses of the creative expression of black culture as it is lived and informed by black rather than white norms and of the global representation of American popular culture, in the face of black rather than white men. Such an analysis requires that one is able to navigate seamlessly between the theoretical constructs of critical theory, the lyrical genius of the Notorious B.I.G. and the choreographic grace of his Airness, Michael Jordan, all the while "keeping it real" as only a Black man can do. Boyd is successful in his methodological approach as he delivers with stunning detail the nuances of what it means to be young, black, rich and famous in America. Boyd's expertise as a critical theorist is evident as he lays out the theoretical framework for the book and adeptly situates his theory within the venue of the National Basketball Association where Hip-Hop music has become the new national anthem. In addition, his background as a journalist and sports enthusiast gives him a solid foundation from which he recounts more than thirty years of basketball history. As an African American man and scholar, Boyd brings lived as well as critical experience to the understanding of the emergence of Hip-Hop culture as a counter hegemonic movement on the American landscape. Boyd identifies the creative genius of the African American style of basketball at the center of a transformation that has taken place in the NBA. It is basketball, with its low equipment cost, ability to be played in small places, and its capacity to be played alone, that is uniquely suited for the African American urban reality. Basketball provides African American "ballers" the creative canvass on which portraits of individualized representations of freedom may be painted. Reminiscent of the aesthetic rhythm of a Magic Johnson assist to James Worthy, Boyd show how the lyrics, the style of dress and the overall attitude of Hip-Hop has informed a new generation "Hip-Hop ballers" in the NBA. Boyd connects the freestyle of play in this new generation of ballers to the freedom of style and expression that is epitomized in Hip-Hop culture. The connection between Hip-Hop and how it influences the rise of freestyle play in the NBA, and the uncompromising and unassimilated attitude of the young, black, rich and famous NBA stars is critical to Boyd's central theme. Boyd does an outstanding job in d

Gave it to 'em raw

Published by Thriftbooks.com User , 17 years ago
Dr. Boyd hits it on the head with this piece about basketball and hip-hop. The only way a book like this can be written the way it was is if you are a part of the culture yourself, because if not, it will not be easy to understand. I, for one, love it because he uses teams from the 80's, such as the Georgetown Hoyas, the early 90's with the Fab Five of the Michigan Wolverines, and other teams, players, and events in the game which took me back in time. When he speaks about these things, you can see the connection with hip-hop, such as Allen Iverson's influence, and others lack thereof. He uses lyrics from some of the hip-hop's greats, but like I mentioned before, you must be a part of the culture or at least familiar with it to see what he is trying to say. He keeps it real throughout the book and gives credit where it is due while being critical at the same time. 'Ball and hip-hop have a unique bond, and the significance of it cannot be ignored.

Published by Thriftbooks.com User , 17 years ago
Todd Boyd takes the notion of the hip-hop industry and basketball being synonymous to an entirely new level. With fluid and memorable references to the similarities of how hip-hop came from the streets, to the formation of how basketball is now the newest form of hip-hop, Boyd captures the essence of the sport like no other. Using references of how both dominate the streets and how the world of basketball has been changed thereafter, Boyd highlights the game and its glitches, from racism down to the money-making formula that has taken hold today. With no stone unturned, readers are carried through moments of fame, glory and the challenges that former and current NBA players face, including dealings within the drug game and how money-making opportunities being offered today are very similar in nature.Although basketball used to be a quiet and unnoticed, it has now emerged as a dominant and lucrative force in the professional sports arena. With unparalleled style, YOUNG BLACK RICH & FAMOUS details the life that almost every young black man dreams of. The NBA, its lucrative deals and opportunities have transformed the way everyone looks at young black males and the actual sport today. Actually, it's quite obvious that basketball has emerged as the new "American" sport. They said it couldn't be done and couldn't happen - next question: Who's Ballin' Now?Reviewed by T. Belinda Williamsof The RAWSISTAZ Reviewers

Boyd has done it again

Published by Thriftbooks.com User , 17 years ago
Young Black Rich and Famous by Todd Boyd is an excellent book that chronicles the rise and fall and again rise of young rich Black men in the NBA during the 60s and 70s to the young rich Black men of the present day NBA. Boyd in addition to following the life and times of NBA players in the past 30 years or more makes the connection with the rise of Hip Hop. While the NBA was becoming a Black dominated sport and a rising Black cultural force another Black cultural monster was on the rise as well and that was Hip Hop.Boyd clearly looks at how the NBA with Hip Hop following right behind puts young Black men at the core of cultural change in the face of racial hostility. If anybody has been lucky enough to read any of Boyd's books, essays or articles, they know that Boyd, whether it be music, film, or sports, consistently puts Black men historically at the center of cultural change in the face of racial contempt. Boyd in all of his readings keeps it real, precise and consistent when it comes to the Black man and his significance to American culture and society at large. Boyd in Young Black Rich and Famous is witty, clever and at times funny in his breakdown of the NBA and Hip Hop and their relevance to popular culture. This book is a must have for everyone.

Published by Thriftbooks.com User , 17 years ago
In the introduction to Young, Black, Rich and Famous, Dr. Todd Boyd boldly declares, "My mouthpiece is platinum, and the words the come from it are like pearls of wisdom tricked off with a whole new flava." Wow. He lays down the gauntlet. Thus, the question is, does his book measure up? I think it does. In clear, evocative and passionate prose, Boyd weaves together the threads of basketball and hip-hop while placing them in a larger social, political and cultural context. He has a wonderful way of revealing backstory to give important events their proper perspective. He'll start with the point he is trying to make and then go backwards to describe the social, political and cultural events that set the stage, if you will, for the present situation. Then he will return to and support his original point. For example, in the chapter about the Detroit Pistons and their emergence as the "Oakland Raiders of basketball," he goes back to 1967, makes his way back to the present and then goes forward. It's interesting to note that this is an accepted cinematic convention and it's just as exciting and interesting to read it on the page.When he's in his groove, flowin', as they say, he's unstoppable. The mouthpiece is platinum. The one person who pops into my mind is Rasputin-I'm sure if there was still a Tsarina of Russia, the empire would be in just as much trouble if Boyd turned his powers of persuasion on her! In the true style of hip-hop( it being at its core a highly personal narrative), Boyd interweaves his own personal and political belief system within the threads of bball and hip-hop. He states early on that he is "a master agent provacateur" and that he is. He manages to take two things that are often dismissed as pop culture and use them to challenge the reader, both intellectually and emotionally. And it's well worth it.
Copyright © 2020 Thriftbooks.com Terms of Use | Privacy Policy | Do Not Sell My Personal Information | Accessibility Statement
ThriftBooks® and the ThriftBooks® logo are registered trademarks of Thrift Books Global, LLC