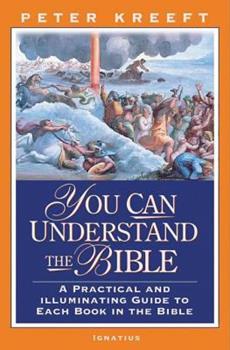 You Can Understand the Bible

Many people are often understandably intimidated or overwhelmed by the sheer size and complexity of the Bible. But now popular author and Boston College professor Peter Kreeft has written a clear road map of the Bible, focusing his keen insight and engaging wit on the core message of each book. It won't take long for you to understand why his guide to scripture has become a best-seller! Sparkling with intelligence and Kreeft's trademark humor, You...

Published by Thriftbooks.com User , 15 years ago
I have looked at several handbooks of the Bible (Halley's, Ryken's, New Jerome, Hollman, Bowker's) and this one is clearly the best. Because the author (Peter Kreeft of Boston College) is a philosophy professor, he focuses on explaining the IDEAS contained in the bible, which is really what ordinary people are looking for when they study the scriptures. The text includes messianic interpretation of the Old Testament (the study of how prophets such as Isaiah and Zechariah predicted the life of Christ hundreds of years in advance) while more "critical" bible study materials dismiss or downplay this. Kreeft includes moral (or "ethical" since he's a philosopher) interpretation of the Bible, such as the occasion when he outlines the cyclical nature of sin in his chapter on Joshua and Judges. Kreeft also makes use of symbolic (or allegorical) interpretation, and anagogic interpretation (what the Bible is saying about the salvation of souls). The book is clearly supportive of Catholicism, but should be useful to anyone who wants to understand the Bible according to the original intent of the writers (Kreeft supports "traditional authorship" of the scriptures). The book has a very evangelical tone, though some dispensationalists may not like it because Kreeft supports amillennialism and sidesteps the evolution-creation controversy.

Published by Thriftbooks.com User , 16 years ago
I rarely, if ever, make such an urgent plea about a book; but Kreeft has given a panoramic view of the entire Bible brimming with the insight of a man in the grip of a faith that is on fire. For Catholics, the book is great because it covers all the books that we recognize as part of the Old Testament and because the Catholic perspective is evident everywhere. As a graduate student in Biblical Studies, I am grateful for Kreeft's giving me an overview that re-energizes my studies and never lets me forget the forest for the individual trees. Thanks, Prof. Kreeft.

Breaking the scriptures open, one book at a time!

Published by Thriftbooks.com User , 16 years ago
I have heard it said of Peter Kreeft that if he explains something to you and you don't understand it, you will never understand it. He certainly has a gift for explaining even the deepest most complex issues in a clear fashion, and with easily graspable imagery which makes him an excellent writer. That opinion is certainly justified in this work. Through the use of clear language, vivid imagery and copious quotes from various translations of the Bible, he breaks the scriptures open, and makes them come alive. This book can be read in at least two different ways, first, a full read through it will give you a clear map of the Bible, the progression and development through the Old and the New Testaments. The second method is to do it in tandem with reading the bible, reading the chapter in this book that refers to a particular book in the Bible as an introduction to it and then diving into that book of the Bible. Either way, this book should be read with a Bible by your side, I found myself turning to it so often to look at quotes which he references, underline, and write marginal notes, that it seems this is the only effective way to truly use this book. If you feel uneasy at the thought of diving into the scriptures, this book will certainly help you to grow more comfortable with the Bible, and even if you already have a deep loving relationship with the Bible, I'm sure Peter Kreeft will have a few thoughts that will make you appreciate it even more!

Published by Thriftbooks.com User , 17 years ago
From a recent entry on my blog: This Advent the lectionary focuses on the Gospel according to Mark. In anticipation of that, we read this afternoon from Peter Kreeft's highly-recommended "You Can Understand the Bible." Dr. Kreeft's book is a collection of chapter-length overviews of the books of the Bible, and each one is infused with his trademark humor, memorable phrasing, and doctrinal clarity. The three-page chapter "Just the Facts: Mark's Gospel" is excellent. He explains that Mark was a close associate of Peter and that in the early days of the Church, his Gospel was referred to as "Peter's memoir." Kreeft also describes Mark's intended Roman audience as people of action much like modern Americans. Accordingly, Mark uses the words "at once" or "immediately" no less than 42 times. In today's (Sunday's) short Gospel reading, the action-filled word "watch" appears four times, the last punctuated with an exclamation point. Mark's Gospel highlights the "love in action" of miracles. These miracles teach two things, explains Kreeft: (1) Christ's identity as the Son of God, His divine power, and (2) His compassion and love in response to human needs. "These two always go together in the Gospels. The Romans tended to separate them, to see power as unloving and love as unpowerful."

Published by Thriftbooks.com User , 17 years ago
As a Christian and even more so as a minister, I use the Bible every day. I know that its sheer size and sometimes its seeming unintelligibility can frustrate and even frighten many from trying to read all of it. There are certain passages that I, too, feel uncomfortable tackling until I've done research. And that is precisely where this book comes in. Kreeft identifies some of the historical, philosophical, and theological themes of each book in the Bible. The guide has a chapter devoted to each book of the Bible, so the guide's organization is very straightforward and thus user-friendly. Kreeft has the rare gift of translating the insights of deep and hard working scholarship into "layman's terms." He also offers excellent interpretations of some of the spiritual insights of the Wisdom literature (Job, Ecclesiastes, etc.). He wrote a great book on Job, Ecclesiastes, and Song of Solomon also worth checking out. Furthermore, if you are a minister looking for sermon material that is expository, Kreeft is generally a very quoteworthy author. I have quoted him in sermons to my congregation much to their delight. In time, this book may prove to be one of Kreeft's most practical contributions to Christendom apart from his excellent works of apologetics. The book is well-written and useful.
Trustpilot
Copyright © 2022 Thriftbooks.com Terms of Use | Privacy Policy | Do Not Sell My Personal Information | Cookie Preferences | Accessibility Statement
ThriftBooks® and the ThriftBooks® logo are registered trademarks of Thrift Books Global, LLC