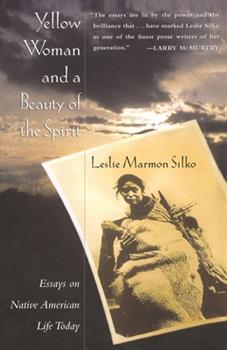 Yellow Woman and a Beauty of the Spirit

Bold and impassioned, sharp and defiant, Leslie Marmon Silko's essays evoke the spirit and voice of Native Americans. Whether she is exploring the vital importance literature and language play in Native American heritage, illuminating the inseparability of the land and the Native American people, enlivening the ways and wisdom of the old-time people, or exploding in outrage over the government's long-standing, racist treatment of Native Americans,...

Published by Thriftbooks.com User , 14 years ago
The essay, "Language and Literature from a Pueblo Indian Perspective" is one of the greatest cultural bridges ever constructed between the Euro-American, linear mind and that of the Native American. I've read and taught that essay many times and each time I go over it, I find another point that merits reflection. Consider, for example, the story about the little girl who drowns herself with that of a typical fairy tale. First of all, unlike the fairy tale, but pretty true to life, there is no happy ending. There are days that all our best efforts turn into snakes, children do commit suicide on the false belief that their mothers/families have rejected them, and if, as I believe, this story illustrates how stories fulfill the purpose of bringing people together, (the death of a child, particularly if the parent is the indirect cause through lapse of judgemnt, is the greatest grief to bear, and knowing that others have also experienced it does give the strength to go on living), it does so on more than a superfical level. The essay itself illustrates non-linear thinking as it does not go from point A to B to C, but starts at C and radiates out from that focal point, "like a spider's web." For those who want a true and accurate insight as to Pueblo thought and experience, this book is one of the best. It also helps that Leslie Marmon Silko is a master writer.

Deeply Moved by Parts of this Book

Published by Thriftbooks.com User , 16 years ago
This book is a book of short stories in which some connect and others do not. My favorite story in this collection is "Yellow Woman and a Beauty of the Spirit". In this story Silko tells of helping her grandmother in her garden while her grandmother tells her stories from the Pueblo people's mythology and folklore. Silko tells us in this particular story that "Many worlds may coexist here". It's a beautiful prose piece that will stick with you after you have left it. There are other memorable stories in this collection also. "Notes on the Almanac of the Dead" is quite interesting and as I have just recently started reading that novel, I found it especially intriguing. It tells of prophecies made 1,000s of years ago by tribal leaders about the future, i.e., the invasion of the white man, his technology, his downfall. Very, very interesting little story! "Interior and Exterior Landscapes" is another interesting story which describes in detail the beauty of the New Mexico landscape. Then Silko goes on to talk about landscape as a character in a piece of fiction, which I found to be very compelling. This is a really good book and if you have not otherwise read Silko a great introduction to her. As the previous writer stated there are some pieces which repeat but otherwise it is a well written and deeply moving collection of stories.

Published by Thriftbooks.com User , 20 years ago
The quality varies in this collection of essays, newspaper/magazine commentaries and other textual fragments. Also, because they often touch on similar topics, the book is a bit repetitive at places - especially in the case of "Fences Against Freedom" and "The Border Patrol State," which contain a number of identical passages. Even so, it is in these two pieces in particular that Silko provides some of her sharpest insights and most damning criticism of official U.S. policy toward Mexico and toward its own citizens living in the Southwest. Also interesting are Silko's observations on the concepts of collective memory and consciousness contained in the complex system of oral narratives among her own Laguna Pueblo nation. Although none of the contributions in this book are in-depth studies, taken together they all offer a great deal of food for thought.

Reveals The Landscape of Silko's Spirit

Published by Thriftbooks.com User , 21 years ago
Silko's collection of essays present an open, expansive view of her mind and art, her background and destiny. If you've read any of her other works, reading this short book will enrich your appreciation as well as assist you on the next step of your journey. If you haven't read any Silko yet, this is a gentle way to ease you into her writings.I read it for the background that she gives about storytelling and the narrative process; for wonderful sentences like this: "The storyteller did not just tell the stories, they would in their way act them out. The storyteller would imitate voices for vast dialogues between the various figures of the story. So we sometimes say the moment is alive again within us, within our imagination and our memory, as we listen." I read it for the wisdom of the old ways of the old-time people; like this: "...time was round--like a tortilla; time had specific moments and specific locations, so that the beloved ancestors who had passed on were not annihilated by death, but only relocated to the place called the Cliff House. At Cliff House, people continued as they had always been, although only spirits and not living humans can travel freely over this tortilla of time. All times go on existing side by side for all eternity. No moment is lost or destroyed. There are no future times or past times; there are 'always all' [her emphasis] the times, which differ slightly, as the locations on the tortilla differ slightly. The past and the future are the same because they exist only in the present of our imaginations...." and she continues, but, isn't that powerful? As well as good writing?I also enjoyed reading of her political activism and her position on many issues of the west and Native-Americans. For me, highly recommended. Can't you tell?

Silko at her best and most urgent

Published by Thriftbooks.com User , 22 years ago
I was extremely surprised to find this collection of essays not reviewed here. The title essay alone, "Yellow Woman and a Beauty of the spirit," carries more weight than most books in total, given the revelatory descriptions of traditional Laguna Pueblo culture.Also, Silko's essay "The Border Patrol State" and other notes on border militarism and race related discrimination are important and timely, and increasingly relevant.
Trustpilot
Copyright © 2022 Thriftbooks.com Terms of Use | Privacy Policy | Do Not Sell My Personal Information | Accessibility Statement
ThriftBooks® and the ThriftBooks® logo are registered trademarks of Thrift Books Global, LLC