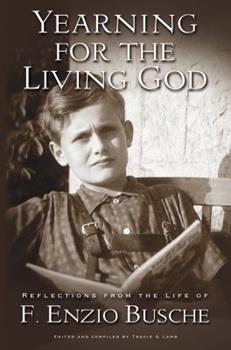 Yearning for the Living God: Reflections from the Life of F. Enzio Busche

This description may be from another edition of this product. F. Enzio Busche, emeritus member of the First Quorum of the Seventy, was born in Germany in 1930, three years before Hitler's rise to power. Fifteen years later, when World War II ended, Enzio was a...

A true story of faith and perserverance.

Published by Thriftbooks.com User , 11 years ago
Good faith promoting true story of a boy who sought religious truth and freedom. He found his prize and became a Christian spiritual leader for millions.

Want to read this over and over!

Published by Thriftbooks.com User , 12 years ago
This book is so incredible. My wife and I have both read this separately and now we are reading together after we put the baby to bed in the evenings and we are learning so much. It has such amazing, inspiring stories that confirm the truth of the gospel in such powerful ways. I recommend this to EVERYONE! It contains so many miracles and examples of how the Lord works in our lives.

An Emotional rather than an Intellectual book

Published by Thriftbooks.com User , 14 years ago
The book starts off with a wonderful insight into the German people before and after Worl War 2. Having spent time in Germany with German people, this helped me understand where they came from in current history. This is followed by stories about his conversion and finding a living God who answers prayers and is a real source of assistance to people. It appeals to the spirit rather than the intellect that is not to say the brain is left out of the book. It is difficult to put down and at the same time so engaging that you have to take a rest while reading the book. Very uplifting to me! I have suggested it to many of my friends and those who have read it have the same opinion.

Published by Thriftbooks.com User , 16 years ago
F. Enzio Busche recounts the spiritual experiences that led him to the Church of Jesus Christ of Latter-day Saints, as well as many experiences since his conversion. His humble and powerful example truly inspires rededication to God. Elder Busche (as members of the Church in his position are called) lets his experiences speak for themselves in teaching the importance of dedicating our lives to God, serving others in charity and love. He minimizes editorializing on the stories, recognizing that they teach better than any summarized moral conclusion could. The first ten chapters of the book give the narrative of his conversion and early membership in the Church. As a young father, I found chapter nine ("Raising a Family") particularly insightful in showing how love, respect, and being prepared for inspiration can help us lead our children in good directions. Several of the later chapters are dedicated to recounting spiritual experiences that others shared with Elder Busche, and many of these reminded me that I often aim too low in my spiritual expectations. An example of this is in chapter fourteen, in which a woman visiting Salt Lake City from Eastern Europe tells Elder Busche, "Can you imagine? I have found people in Salt Lake City who have never seen an angel." Almost every chapter of this book, especially once I reached the beginning of Elder Busche's spiritual life in chapter four, left me pondering how I could reorient my life towards God and draw closer to Him. Another excellent spiritual memoir by a member of the Church of Jesus Christ of Latter-day Saints is An Abundant Life: The Memoirs of Hugh B. Brown, edited by Edwin Firmage.

Published by Thriftbooks.com User , 17 years ago
Besides only the holy scriptures themselves, this is the best, most inspiring book I have ever read. Full of important spiritual insights, it deserves to be read and contemplated. I have been recommending it to friends and family, and all who have read it agree with my assessment. The book's anecdotes are fascinating and stunning. You will be moved to strive for the benefits of a spiritual life.
Copyright © 2020 Thriftbooks.com Terms of Use | Privacy Policy | Do Not Sell My Personal Information | Accessibility Statement
ThriftBooks® and the ThriftBooks® logo are registered trademarks of Thrift Books Global, LLC