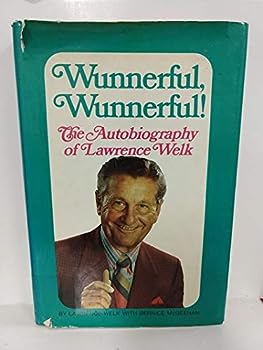 by Bernice McGeehan and Lawrence Welk

Wunnerful, Wunnerful! The Autobiography of Lawrence Welk. ASIN: 0139715150. This description may be from another edition of this product.

Published by Thriftbooks.com User , 14 years ago
My mother is 92 and a advide fan of Lawrence Welk. She thoughly enjoyed the Wunnerful, wunnerful book.

Published by Thriftbooks.com User , 15 years ago
I watched the Lawrence Welk show on Saturday evenings growing up in the seventies, after the show had already gone into syndication, but it wasn't until the nineties that I took an interest in Welk's writings as well as the reruns on PBS. The book is very honest in most places and definitely portrays Welk as a driven individual dedicated first and foremost to entertaining his audience as opposed to brainwashing them as is the case since the 60's with both the so called entertainment and post secondary educational industries. Welk is portrayed as a hardworking and dedicated businessman who is also portrayed as a very ethical individual. How true this may have been is open to interpretation, since no one becomes worth over 100 million by being a nice guy all the time. Some of his social reforms explained in his later works are not very realistic since his was a rather myopic view of the oligarchial - excuse me, capitalistic - system in control of America. Stil, I enjoyed this book as well as his other books. They are very entertaining and informative in terms of the entertainment and television business. I would recommend this book to anyone interested in the entertainment industry and anyone interested in clean family entertainment, which is certainly becoming rare these days.

Published by Thriftbooks.com User , 15 years ago
Item as described and received in a timely manner... an excellent buying experience!

Published by Thriftbooks.com User , 22 years ago
Wunnerful, Wunnerful! The Autobiography of Lawrence Welk by Lawrence Welk with Bernice McGeehanThis excellent book made me a Lawrence Welk fan. Until I read his autobiography I considered Welk's music more suited to my mother's taste. I have changed my mind. I picked up my copy at a yard sale and bought it mainly because it had the signature of the author scrawled across the title page. I like biographies and autobiographies, and when I settled down to read this one, I was well rewarded for my treasure hunt. Threaded throughout this book are examples of integrity and thoughtfulness that show Lawrence Welk to be an outstanding showman, a hard worker, a devoted family man, a man of faith, and basically a decent human being. His humility in the face of success and his concern for his musical family made him someone to be admired. From the first $400 accordion that cost him four years work on his parents' farm to the fleet of Rolls Royces that graced his final years, it was a long, hard road. His thick accent became his trademark, along with his "Champagne Music" that entertained so many of his fans. But his fans were more than just fans, they were his friends. That is unusual in the world of entertainment, but then he was an unusual man, and this is an unusual book. I recommend it highly.
Trustpilot
Copyright © 2022 Thriftbooks.com Terms of Use | Privacy Policy | Do Not Sell My Personal Information | Cookie Preferences | Accessibility Statement
ThriftBooks® and the ThriftBooks® logo are registered trademarks of Thrift Books Global, LLC