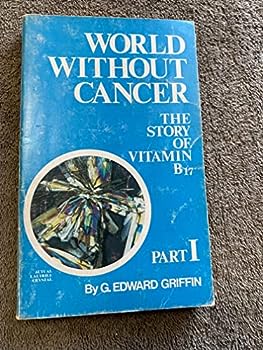 World Without Cancer: The Story of Vitamin B 17

Mr. Griffin marshals the evidence that cancer is a deficiency disease like scurvy or pellagra aggravated by the lack of an essential food compound in modem mans diet. That substance is vitamin B17. In... This description may be from another edition of this product.

Getting tired of the "why" question...

Published by Thriftbooks.com User , 16 years ago
As an "alternative" practitioner, it sure does get tedious to hear the question, "If it worked so well, then why isn't it all over the news and talked about by every M.D. and cancer researcher?" With the answer often being, "because it works too well and no real money can be made from it", most people grapple with the implications and ultimately write it off as some crazy conspiracy theory. This is the saddest, most frustrating, and even ridiculous type of road block to encounter when attempting to educate and help very ill people. It ultimately reveals the extent to which we've all been programmed (and I don't use that term lightly here). If you don't like the word "conspiracy", then use another, but it doesn't change the fact that a small group of greedy, powerful people are keeping vital health info from the rest of us for a variety of self-serving reasons. This book reviews just ONE type of natural therapy (from dozens if not hundreds) that has and does work, but was felled by politics, economics, greed, corruption, and possibly plain old evil. You will find very similar accounts of Vitamin C, Rife technologies, homeopathics, magnetic therapy, ozone, chelation and many others. Same old story for the last 120 years or so. Some of us seem to get very rich, the rest of us suffer and then die. You can ask "why" all you want, but I suggest you take off your blinders, turn off the "boob-tube", and get off the sofa and do some serious research into these matters before you or your loved ones are felled by our modern health care industry.

Published by Thriftbooks.com User , 21 years ago
As a physician, trained at one of the premier medical schools, I applaud this book. Only several decades ago, private medical researchers went to distant lands to find out why certain tribes never died of cancer. These researchers found that seeds, almond, apple and others were full of a vitamin: B-17, which is totally absent in our American diet due to processing. These researchers were silenced and the major pharmaceticals, Rockefeller, et al, took the lead on any further research, thus ending independent research as we know it. Small groups of doctors still exist and believe in the anti-aging concepts of preventive and nutritional health as a prevention for many of the maladies facing man today. Seek us out - we are there - still fighting.

This book is a MUST READ for anyone

Published by Thriftbooks.com User , 22 years ago
My brother died of cancer in 1978. Shortly after he died, I heard the tape "The Politics of Cancer Therapy", which is based on the second half of the book "World Without Cancer". That tape was one of the best done presentations I've ever heard--about anything. It is about the takeover of the field of medical education by the drug industry, and explains why cures for cancer aren't really of great interest to the medical field.The tape was so fascinating that I immediately went out, bought the book, found that even better, and made the trip out to interview Mr. Griffin.Mr. Griffin is extremely well informed, writes and speaks clearly and makes his subjects very easy to understand.If you have any interest in either an effective treatment for cancer, in world politics, or in politics and the medical field you simply have to read this book. I cannot speak too highly of it.
Trustpilot
Copyright © 2022 Thriftbooks.com Terms of Use | Privacy Policy | Do Not Sell or Share My Personal Information | Accessibility Statement
ThriftBooks® and the ThriftBooks® logo are registered trademarks of Thrift Books Global, LLC