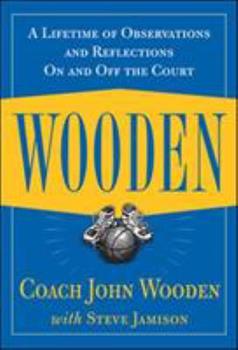 Wooden: A Lifetime of Observations and Reflections on and Off the Court

NATIONAL BESTSELLER "I am just a common man who is true to his beliefs."--John Wooden Evoking days gone by when coaches were respected as much for their off-court performances as for their success on the court, Wooden presents the timeless wisdom of legendary basketball coach John Wooden. In honest and telling passages about virtually every aspect of life, Coach shares his personal philosophy on family, achievement, success, and excellence. Raised...

Wisdom from a master teacher

Published by Thriftbooks.com User , 20 years ago
Listen to anyone who speaks about him, or read anything that anyone writes about him, and you will instantly know that John Wooden is truly a national treasure. This book of Wooden's wisdom and life philosophies is definitely on my short list of the best books of all time about character and leadership.This book is a collection of the simple and direct beliefs and observations of John Wooden, arguably the best (college) basketball coach of all time. Interestingly, very little of what Wooden wants to teach is about basketball. His quick stories, short vignettes, and detailed memories focus on life and relationships with others. Coach Wooden is a gentle man with the courage and discipline to live his life according to his deepest held ideals, values, and principles. Despite his teams' unbelievable success (10 NCAA national basketball championships in 12 years (including 7 in a row!), 88 consecutive victories, and 38 straight NCAA tournament victories), and his own fame (many coach-of-the-year honors, "Sports Illustrated's" sportsman of the year, a lifetime winning percentage of over 80%, and the first man to be elected to college basketball's hall of fame as both a player (3-time All-American at Purdue) and coach), he resisted the public pressures and temptations to stay true to himself and his beliefs. Coach Wooden defines success as the "peace of mind that is a direct result of self-satisfaction in knowing you did your best to become the best you are capable of becoming." The book finishes with 30 pages devoted to Wooden's legendary "Pyramid of Success" and another 5 pages of his favorite sayings - 35 priceless pages in a priceless book. At a time when America is re-defining and searching for true heroes to lead us forward from our darkest days, this book is a beacon of hope and guidance and should serve as a blueprint for making heroes of us all.

Not a book about basketball, but about life!

Published by Thriftbooks.com User , 21 years ago
John Wooden had one of the most successful basketball careers as both a player in coach. He also had a strong family life with his parents, wife and kids. In this book, you'll read all his secrets to success that makes him a truly special person of strong moral values and organizational skills. He surely was a great influence on almost everyone he associated with.There's nothing here about basketball strategy. The book is broken up into 1-4 paragraph anecdotes about subjects relating to family values, organization, and success. His basic philosophy in winning was not which team scored the most, but whether or not his team played to their maximum ability. He also has some interesting stories about Bill Walton and Kareem Abdul Jabbar. The best part of the book, in my opinion, is where he outlines his pyramid of success. The pyramid is a step-by-step, building block of characteristics you must master which lead you to maximizing your potential and perform at the highest level possible, whether it's sports, business, or family. A must read.

A "Wizard", Yes, But Also Human

Published by Thriftbooks.com User , 22 years ago
Having once coached varsity high school basketball for 13 years and having heard Coach Wooden speak at numerous clinics, I can personally attest to the authenticity of this book's contents. It correctly suggests both the man's wizardry and humanity. Jabbar and Walton have almost nothing in common except their talent to play basketball and their love and respect for Coach Wooden. He is proud of them but probably just as proud of hundreds of other players (most known only to him, their families, and friends) who are physicians, educators, artists, attorneys, public servants, corporate executives, entertainers, etc. He set very high standards, especially for himself. He prepared for each practice and each game with meticulous care. He hated losing for lack of a maximum effort but accepted defeat (after a maximum effort) with exceptional style and grace. Anyone who has any association with children, especially those privileged to coach at any level, should read this book. And may I add, anyone who feels adrift in her or his life should also read this book. The "lessons" provided helped to win so many NCAA national basketball champlionships; they also helped to develop the character of those who played on the U.C.L.A. teams which won them.

"Failing to prepare is preparing to fail."

Published by Thriftbooks.com User , 22 years ago
John Wooden, former UCLA Basketball coach, came together with Steve Jamison to compile a book based on John Wooden's philosophies. This book, "A Lifetime of Reflections and Observations On and Off the Court" appeals to everybody. If you're a fan of basketball, play basketball, or are a father or mother, son or daughter, John Wooden gives his advice to everybody. Most people will think that this book is only about basketball, not at all. If you're looking for answers for any kind of problem you are facing, I'm sure John Wooden will have some affect on you. John Wooden is an 88 year old who was a former UCLA basketball coach, leading the Bruins to 10 championships in 12 years. He grew up in a small town and has lived a simple and basic life. In the book, he talks about success as a person, personal goals, acting towards others, behaviour, discipline, parenting, leadership, adversity, and numerous other topics - of course including basketball. This book has made me a better person and a better basketball player. It has taught me that I can learn from experience, not things that I can learn before-hand. It has taught me how to constantly improve and how to always work harder. To be industrious and enthusiastic in everything I do! With that said, I'll leave you with a quote from John Wooden that has helped me improve in school, on the court, or whenever I'm working; "Failing to prepare is preparing to fail."

Wooden- The Wizard does it again!

Published by Thriftbooks.com User , 23 years ago
I bought this book while visiting the UCLA campus to attend a mens' basketball game. I received "Practical Modern Basketball" from my high school coach as a gift when I began my teaching and coaching career in 1976. This became my coaching bible for years to come. When I saw this new book, Wooden, I bought it without hesitation, thinking that John Wooden's "Lifetime of Observations and Reflections On and Off the Court" was as much a mystery as it was curiosity relative to my appreciation and utilization of the words of wisdom provided in the book I received as a gift in 1976.My career in public education has allowed me to seriously reflect on my life as it pertains to personal gratification of preparing for unknown opportunities and being able to rationalize with poise and confidence. I attribute many successes in my life to the Wooden philosophy that I followed in my early years of my career. Wooden's, reflections, is an outstanding assessment of what a man of Mr. Wooden's character achieved through hard work, dedication to his own philosophy, and the love for life and people. I have recommended this book to personnel within my organization,to coaches and friends. It is also a great asset for parents who need direction in how to raise their children, basing all dialoge and communication on respect. I truly respect the real value of this book as an asset to my future and my family and my responsibities as Assistant Superintendent of Schools! Thanks, Eddie Booth, Winnemucca, NV
Trustpilot
Copyright © 2022 Thriftbooks.com Terms of Use | Privacy Policy | Do Not Sell My Personal Information | Cookie Preferences | Accessibility Statement
ThriftBooks® and the ThriftBooks® logo are registered trademarks of Thrift Books Global, LLC