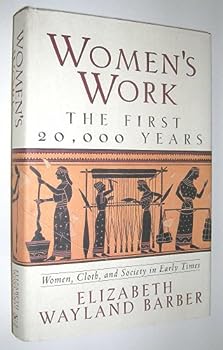 2500 years ago, the women of Athens slaved at home, virtual prisoners of their husbands, expected to provide the cloth and clothing for their family. 4000 years ago in ancient Mesopotamia, there was a very different picture: respectable women were in business, weaving textiles at home to be sold abroad for gold and silver. Going back even further, 20,000 years ago women began making and wearing the first clothing created from spun fibres. Indeed,...

One of the best books I've ever read

Published by Thriftbooks.com User , 16 years ago
Anyone interested in so-called gender studies, textiles, prehistory, or just in regular people ought to read this book. The authoress, in incredibly simple language (she can't REALLY be an academic, can she?), tells the story of women and the textile work that has (pre-) historically been theirs. Bringing the insight that only a practicing weaver or spinner could have to the dusty world of archeology, she sweeps the reader into the homes of real people. Lots of metaphors, but honestly, it's that kind of book: rich. I only wish I could read it again for the first time.

Published by Thriftbooks.com User , 18 years ago
As a fiber artist, I am very interested in the history of fiber. Elizabeth Barber's "Women's Work: The First 20,000 Years" is fantastic, both as a history of the use of fibers and as a history of working women. I learned a great deal about women's role in society from her research, and it makes me proud to be a modern woman working with fiber, just as my ancestors did. Highly recommended!

It's no work to read this book!

Published by Thriftbooks.com User , 18 years ago
This book covers a huge amount of information without ever being dry or boring. The tone is conversational throughout and incredibly interesting. The author shows us the oldest surviving fragment of cloth (a wool plaid from 800 B.C.) and then weaves a replica herself to see how long it would have taken to make. There are examples of Greek pottery showing women weaving at warp-weighted looms, which allows the author to tell us about the migration of peoples by describing finds of loom weights in Egypt. Other pottery fragments show women walking and hand spinning at the same time, and then a drawing of the Venus de Milo, with arms drawn on, shows that her arms are in the same position and she was very likely spinning thread. It's a marvelous book that's as easy to understand as a conversation over a fence with your neighbor. In fact, there's a picture of two modern Hungarian girls doing just that while wearing their typical bell-like national costume, and beside this picture is a scene from a mid-first millennium B.C. vase found in Hungary showing a very similar costume. The author moves us back and forth through history and across the continents with ease and interest. It's a fabulous book.

Who knew string could be so interesting?

Published by Thriftbooks.com User , 22 years ago
I had the privelege of attending a lecture by the author recently, and ran out immediately after to get the book. It is clearly written and obviously well researched, and Barber has a refreshing, unique perspective in archaeology: she views her subject from more than one angle. Looking at "women's work" as an archaeologist, linguist and weaver, Barber is able to see the bigger picture, and points out gaping holes in most prehistoric civilization studies: little, if any, mention of textile production, and its sweeping impact on early society. Barber has reproduced many of these textiles herself, and in my mind, this practical experience makes her more than just another academician spouting theory. The book is a good read, and thankfully the author does not use this material to plug any revisioinist-history agenda. I look forward to her next book, possibly a study connecting language, archaeology, etc., with regard to textiles found in N.W. South America that have a stiking similarity to some Asian textiles. This was brought up as a final point in the lecture: we all await the next chapter!

Published by Thriftbooks.com User , 23 years ago
This is a scholarly yet easily read book about the history of textiles, from basic string to complex weaves, and also about the fascinating history of the social development of humanity, from hunter-gatherers on.The author's research is thorough and includes archeological evidence, analysis and identification of artifacts, maps and descriptions of trade routes, consideration of stories and myths, photographs, letters, and even human physiology. Her theories, including why women are absent from most historical records and what the Venus de Milo was doing with her now-missing arms, are eye-opening and firmly grounded in her extensive research.Further, this book covers a lot of ground as well as time. Geographically, areas from the Eastern reaches to Europe and down into Egypt are presented, and comparisons between ancient and modern costumes and traditions are made.During the course of the book the author makes the cogent point that archeologists and historians m! ight do well to attempt recreation of artifacts found (using time-appropriate methods); her own experiences in making such a recreation is telling and amusing. Likewise, her observations on customs and costumes (those which have survived, those which have not, and possible reasons why) suggest that sociology has much to add to our understanding of history, of the hows and whys humans have lived and developed.I found this book to be suprising, thought-provoking, entertaining, and a good reference source. I have presented copies to two of my friends (they kept borrowing my copy!), and will it serve as a gift to three more (who keep trying to borrow mine, but I've learned my lesson).
Trustpilot
Copyright © 2022 Thriftbooks.com Terms of Use | Privacy Policy | Do Not Sell My Personal Information | Accessibility Statement
ThriftBooks® and the ThriftBooks® logo are registered trademarks of Thrift Books Global, LLC