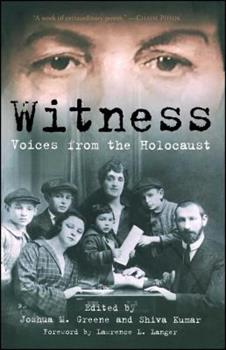 Published by Thriftbooks.com User , 14 years ago
It has been more than 60 years since the Holocaust occurred, yet there can never be enough written about this tragedy, especially so since many of the survivors are diminishing in numbers. In Witness: Voices from the Holocaust, we are able to learn about this human tragedy of epic proportions that was the Shoah based on actual testimonies of survivors. The book is very well-organised and is divided into chapters, i.e. Life in Europe in the 1930s, The Outbreak of War, The Ghettoes, Escape, Hiding, and Resistance, Deportation and Arrival, The Camps, Death Marches, Liberation and Aftermath. Apart from the compelling eyewitness testimonies [not just by survivors, but also in some cases Gentiles], there are also pictures that depict the lives of European Jewry before, during and after the war. A compelling addition to Holocaust literature and though the stories themselves aren't lengthy, the horrors that they evoke is enough for us to reflect upon.

profound, disturbing, a must read on the holocaust

Published by Thriftbooks.com User , 18 years ago
I read this book several years ago and it had a profound affect on me. It is divided into three sections: life before, life during, and life after the holocaust for Jewish survivors. All the accounts are first-person narratives by the survivors themselves. I believe they were all interviewed on tape for a documentary. And then they put it into print to create this book. Something that surprised me was how prevalent anti-semitism was in the years before the Holocaust. Sometimes we think Hitler suddenly arose out of nowhere with his anti-semitism. But he was actually just "riding a wave" of hatred of the Jews. The Polish people were in particular very hateful of the Jews. It really surprised me how much they had to endure before WWII even began! This book was a compelling read - true accounts directly from those who survived the greatest horror of the 20th Century.

Published by Thriftbooks.com User , 20 years ago
As opposed to earlier commentators I do not come from a background rich in readings on the subject of the Holocaust and therefore Witness came as a unexpected mine of memories of people that had experienced the unimaginable.My knowledge of the events of the Holocaust were almost exclusively from video documentaries and those documentaries had left many unanswered questions: questions about the Transportation, about the Marches after the camps closed late in the war, about the closing of the ghettos, about the long-term hiding, about the massive anti-semitism that greeted the survivors after the war upon returning "home" and finally the Jewish guerrilla bands that sprang up throughout eastern Europe.The remarkable thing about this great exercise is the broadness of the interviews that compose the book: the authors assembled a very wide ranging collection of these interviews that spoke about all the topics that I had only heard snatches about in the video documentaries. It was all the more remarkable because these were all primary sources-they were not what somebody had interpreted but the memories of the people that lived the experience and because of this the book had an enormous impact on this reader.I am a slow reader and the book absorbed me totally and I finished it in a matter of days.If you read no other book about the Holocaust-read this one.

A true testimonial from the voices of survivors

Published by Thriftbooks.com User , 21 years ago
After reading some 100 Holocaust-related books, I find this to be one of the best actual survivor compilations. Though the last names are not used throughout the book, each "author" has a distinct personality, which really makes the reader feel the different accounts in a truly different way. From the poor girl whose parents were deaf to the American soldier wrongly arrested and interned, this book allows those who lived the hell of the Shoah to tell their own words in their own way. I literally did not put this book down until I finished every page. It made me cry, and again question how the world stood by and allowed this to happen.

Published by Thriftbooks.com User , 22 years ago
I picked up this book in a local bookstore one afternoon, not planning to buy it, just to glance through since I'm very interested in the Holocaust. I was late picking my mother up from work because I became so caught up in it. What I appreciated most about Witness was the many different viewpoints presented, I can't remember another time where I was able to read a Hitler Youth's account of the happenings, and I had not read all that many accounts by American POWs. I spent an entire afternoon and late into the night reading the book straight through, and it was definitely time well spent. I agree with the previous reviewer in that the stories arent' quite so graphic as many I have come across, and yet I think since it is in each of the witnesses own words, nothing altered, not even grammar, it is so much more poignant. I would definitely recommend Witness to anyone searching for a greater knowledge of what occured in the camps and throughout Germany and Poland during this horrific time.
Trustpilot
Copyright © 2022 Thriftbooks.com Terms of Use | Privacy Policy | Do Not Sell or Share My Personal Information | Accessibility Statement
ThriftBooks® and the ThriftBooks® logo are registered trademarks of Thrift Books Global, LLC