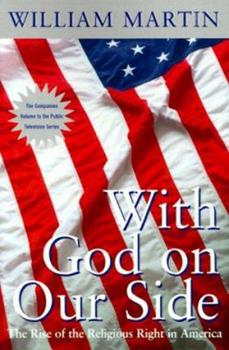 With God on Our Side: The Rise of the Religious Right in America (Pbs Series)

Informed and informative, With God on Our Side offers an unbiased, in-depth examination of the movement that is changing the face of American politics, society, and culture. With revealing portraits of such influential figures as Pat Robertson, Pat Buchanan, and Ralph Reed, this thought-provoking book explains how the Christian Coalition and other groups have become so powerful. of photos.

Comprehensive Overview of the 20th century

Published by Thriftbooks.com User , 14 years ago
Martin's book is a fairly comprehensive review of the politics of the right - religious and political - in the twentieth century. It stands separately, but as a good companion to the PBS series of the same name. With God on Our Side has extensive tracts of information (mostly from interviews) on Billy Graham, Ralph Reed, Pat Robertson and the Christian Coalition, as well as Jerry Falwell and the Moral Majority. It seems fairly objective in its presentation. I highly recommend it for those wishing a deep and fairly well-balanced account of the Christian Right (it is better as a review or prep book for a professor or graduate than for an undergraduate text). The book's detail declines after the first Bush Administration. It has less information on the Clinton era, and almost none on the Presidency of Bush Jr. Overall a good work, rooted in what seems to be a solid review.

An excellent overview and reliable place to start.

Published by Thriftbooks.com User , 20 years ago
This book is pretty solid in documenting the history of the religious right in America. Although much of the focus is on the last half of the 20th century, the introduction and the epilogue give some background on the interaction between Christianity and government in the previous period.I haven't seen the PBS television series that this book accompanies, so some things in the book probably impact a little differently than seeing video or audio accounts, especially so in a movement that makes so much use of oral speeches and broadcasts. But at least in the written account, the balance is kept between fair treatment and criticism of the different elements of the movement. This is no easy feat, given the sometimes inflammatory rhetoric both by the Christian right and against it.The chapters of the book appear to reflect an episode format, with varying types of focal points telling the story in a roughly chronological order. One chapter profiles a person (--Billy Graham) while other chapters highlight in depth a local conflict (such as the battle over sex education in Anaheim and the school book battle in West Virginia), while others talk primarily about the formation of the major activist groups (Moral Majority, and then later the Christian Coalition). One trend appears to be that as the Judeo-Christian culture lost its monopoly in the political process, the struggle has been for the Christian right (in whatever form it took at the time) to keep its place at the table while keeping to its core values. Even at the end of the book (which ends with mid-1996), this conflict was not resolved.The book also focuses on personal profiles of the individuals in the involvement, which also provides some more depth about what many people might lump together as monolithic. The differences between Jerry Falwell's background (the rural son of an alcoholic father) and Pat Robertson (the son of a U.S. senator) are pointed out in light of the interaction (or lack thereof) at certain points when they would be considered natural allies on the surface. And at a time in the 1980s when most Christian preachers and conservative commentators were considering the possibility of quarantining or tatooing AIDS patients, one televangelist said:"How sad that we as Christians, who ought to be the salt of the earth, and we, who are supposed to be able to love everyone, are afraid so of an AIDS patient that we will not go up and put our arm around them and tell them that we care."The televangelist? Tammy Faye Bakker.For those seeking to learn about the movement without the whitewash or the ridicule that accompanies most assessments of the Christian right, this book is the best place to start.

Crucial to an objective understanding

Published by Thriftbooks.com User , 22 years ago
William Martin's With God on Our Side offers a sympathetic yet objective look at the evolution of Christian fundamentalism in America over the last 50 years, culminating in the rise of the Christian Coalition and the Religious Right. Written in conjunction with a PBS series of the same title, Martin's book contains both a detailed overview and plenty of first-hand accounts of events that have transformed what was once a politically non-existent group into one of the most important voting blocs in America. No matter which side of the fence you fall on, this book is a must for students of both religion and politics.

An objective treatment of the rise of the Religious Right.

Published by Thriftbooks.com User , 24 years ago
William Martin presents an outstanding background of the rise of the Christian Right. With his thorough research, the reader has a complete objective history of the movement of evangelicals into politics.
Trustpilot
Copyright © 2022 Thriftbooks.com Terms of Use | Privacy Policy | Do Not Sell My Personal Information | Accessibility Statement
ThriftBooks® and the ThriftBooks® logo are registered trademarks of Thrift Books Global, LLC