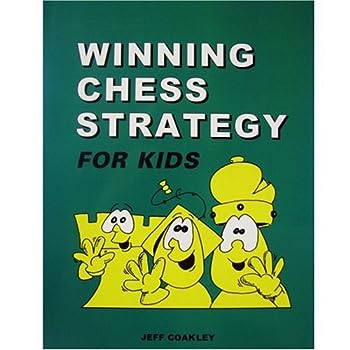 This description may be from another edition of this product. Winning Chess Strategy for Kids is a fun and comprehensive chess course written for children 7 to 13 years old. Full of original material and entertaining artwork, it's a perfect guide for learning...

Not Really for Kids

Published by Thriftbooks.com User , 12 years ago
The only thing about this book "for kids" is the simple verbal explanations and the somewhat random, yet logically progressive, organization of the material. Neither of these issues is a drawback for the adult student; and the simple language is, in fact, welcome in a book that covers such a technical subject as chess strategy. Coakley mixes tactical exercises (typically nine to a page, preceded by three sample exercises for practice) with essays on strategic concepts, along with little vignettes about chess culture. Each section is one to five pages in length. The following are the specific types of sections in the book: Essays on Strategy (labeled as 'Kiril's Class') These are 3-6 page essays on strategic concepts, which range from basic understandings like 'rooks belong behind passed pawns', to more advanced topics like 'attacking the castled king's position' and 'pawn play'. Some of these topics are found hidden in other more advanced books like Pawn Power in Chess or Art of Attack in Chess, so kids getting exposed to them in their first book on chess strategy can only be a good thing. Coakley doesn't get bogged down with variations or oversimplify. Some of the more advanced strategic essays even build on tactics exercises given earlier in the book. In this sense, the book is structured well, despite its seemingly random organization. Tactics Exercises (labeled 'Combo Mombo' and 'Tactics 101'): Coakley gives a brief explanation of a tactical motif (all are included) and then follows up with three practice exercises and nine "test" exercises. Chess Lingo: Here Coakley discusses specific strategic topics and nomenclature, like "zugzwang," "square of the pawn," or "en passant." These sections are mixed with small vignettes about chess culture and tournament manners. For a complete listing of all the Chess Lingo and Tactics Exercises, please see the user-submitted pictures. For the stronger player, this books could serve as a nice refresher course in basic chess strategy. The book is complete in its scope and treats sophisticated material in a straightforward way. For the beginner, the book is an excellent introduction to chess strategy, because it ramps-up the technical material in an appropriate manner and includes many topics not covered in less ambitious texts for kids.

Published by Thriftbooks.com User , 13 years ago
I got this book for my son because it contained a lot of easy to understand explanation along with visuals. My son reads it every day and can spend hours working through the examples and exercises. I enjoy reading it with him and solving the examples with him. This book is a great resources for chess students young and old!

Published by Thriftbooks.com User , 13 years ago
The content of this book is great. Coakley breaks down a wide range of tactical, strategic, and end game themes into clear rules that are easy to remember and apply. For example, the King vs. King and Pawn ending is broken down into three simple rules. Coakley's great achievement in this book is that he presents so many valuable and subtle lessons, from opposition to tempo, in a way that young readers can understand and actually apply in their games. My only complaint about the content is that the organization seems scattershot, but perhaps that's deliberate and I'm simply not getting the point. I think kids aged 9 and above (and adults!) can study this book on their own and benefit greatly from it. I highly recommend this book to any player of any age. In fact, if you've been frustrated by more "advanced" texts whose lessons are difficult to apply in your games or seem to leave out important details, you'll find many of these details lucidly and usefully expounded in this book. My only big complaint, and the reason for the lost star in my rating, is the unacceptably cheap binding. After little use and meticulous care (I'm a real nerd with my books) my copy is falling apart. Such poor binding is especially egregious in a book intended for kids. Bain's excellent Chess Tactics for Students is the gold standard in this category, which has held up very well to my son's abuse.

A great book that covers a lot of material in a friendly way!

Published by Thriftbooks.com User , 16 years ago
This book was recommended to me by NM Dan Heisman. I did not underestimate the "for kids" suffix to the title the second time in a row given that the last book I thought I was "too advanced" for was Bain's Chess Tactics. Big mistake ... I couldnt' solve all the problems under a few seconds each and that clearly brought to light what seperates the good tactical players from the ones who think they are good. So I approached this book promising myself that I wouldn't skim pages even if the material was basic. Boy, was I surprised! This book certainly does not structure the lessons (Tactics, middle-game strategy, endings) in a set order, and while I initially thought it was too chaotic, I realized that if you're writing for kids, you certainly shouldn't worry. Kids (and certain adults like me) dislike monotony and I certainly wouldn't want an instructive book on chess to read like an academic text. The hops in the "chess knowledge" between two consecutive lessons are sometimes wild and catches a lower-intermediate player (I'm a USCF 1500-rated adult at the time of writing this) off guard enough to warrant a serious read. For example , One lesson talks about the basics of a fianchetto, and you're skimming through it saying "yeah, I know this stuff" but you are stopped cold when you notice that the next one is a lesson on Pawn Rams/Levers that you seldom find in instructional material directed at kids! Cartoony-illustrations and a fairly ticklish sense of humor do help the material get across and there are tons of tactical exercises that one can use for practice. On the whole, I'd recommend this book to anybody who makes the mistake of rushing into advanced texts (My System, Reassess your chess) and feels lost at sea. Any kid (even one who just started playing chess) who reads this book is going to start putting his rooks behind passed pawns, understand what opposite-colored bishops mean in endgames and reach Lucena/Philidor positions and a whole lot more! While Coakley's book doesn't give you a means to instantly make your chess better, it instead provides a checklist to make sure that you haven't missed out anything fundamental, which IMHO is the most horrific mistake any aspiring tournament player could make.

Not Just For Kids!

Published by Thriftbooks.com User , 18 years ago
If you are a dad who wants to teach his child serious chess, here's your book. If you are a chess coach for an elementary or middle school, you've found a mine of information. The title is a bit misleading since the emphasis is more on tactics than strategy, but this is a fun book. Coakley clearly explains the tactics and terminology of chess, along with a bit of strategy, in simple language graced by lots of clever illustrations and exercises. While concentrating on middlegame skills, he also covers essential endgame information as well as opening guidelines. This book assumes you already know how the pieces move (although an appendix explains the basic rules). It is designed to take a beginner to the intermediate level. By working through it, adults as well as kids will acquire the tools of winning chess. Coakley has put a sophisticated survey of chess principles in a breezy format. But don't be fooled. If you master the information in this book, you will have become a formidable opponent. This is a valuable book.
Copyright © 2020 Thriftbooks.com Terms of Use | Privacy Policy | Do Not Sell My Personal Information | Accessibility Statement
ThriftBooks® and the ThriftBooks® logo are registered trademarks of Thrift Books Global, LLC