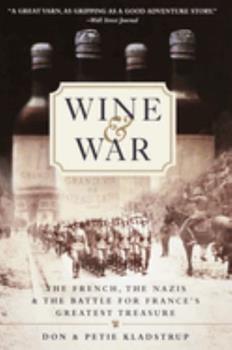 Wine and War: The French, the Nazis, and the Battle for France's Greatest Treasure

The remarkable untold story of France's courageous, clever vinters who protected and rescued the country's most treasured commodity from German plunder during World War II. "To be a Frenchman means to fight for your country and its wine." -Claude Terrail, owner, Restaurant La Tour d'Argent In 1940, France fell to the Nazis and almost immediately the German army began a campaign of pillaging one of the assets the French hold most dear: their wine...

Published by Thriftbooks.com User , 13 years ago
Historical accounts, and memoirs of WWII abound ... but this is the first book I've encountered that focused on the events and circumstances regarding the effects of the war on France's premiere vineyards, winemaking families, and the fate of vast cellars of wines (millions of bottles) that lay ripe for plunder ... and the people who took refuge there. Before now, I'd seen some direct and indirect references to the massive looting of wine documented in various books and movies on the period ... such as the scene in Steven Ambrose's Band of Brothers in which Easy company uncovers a massive cache of looted vintage luxury champagne in Hitler's Berchtesgaden/Eagle's Nest complex - only to discover that most of it tasted inexplicably like swill. This book not only explains WHY, it also explains who stole them and how those bottles came to be there in the first place. It's a great book - told as a series of interconnected accounts based on interviews conducted by the authors with winemakers and veterans of the underground resistance who lived (and suffered) though it all. The storytelling is gripping, fast paced, and, at times, takes on some of the amusing qualities of "Hogan's Heroes", as we see desperate (but oh so clever) winemakers and resistance fighters repeatedly put one over on the occupying forces bent on milking them dry and outright looting them blind. We see massive caves of wines, walled up and hidden from the invaders, we see poor vintages re-labeled as great ones and sold/given to oneologically clueless officers tasked with shipping stolen wines back to Germany ... and we see what happened to those who got caught doing so. Fiction, even at it's best, sometimes can't hold a candle to some of the crazy (and terrible) things that have already happened in real life. Highly recommended. The mark of a good book is that it totally immerses you, and won't let go ... and it makes you look for ways to find the time to get back into it, when real life tears you away. P.S. Be sure to look for the Kladstup's other book on Champagne.

Wine and War and People

Published by Thriftbooks.com User , 21 years ago
Today, much of the wine business is just that - business. This book is a reminder that wine is also about family, friendship and tradition. The Kladstrups have written a sympathetic, even romantic account of how the French wine families survived during WWII. From a vintner's perspective, this war was largely fought on family farms and in ancient villages. The authors have done a great job of revealing the intriguing personalities, French and German, of the wine community of that time. Don't be fooled by the title. The book is indeed about wine and war, but it is mainly about people.

The invasion of the wine snatchers

Published by Thriftbooks.com User , 21 years ago
Very early in WINE & WAR we are given a description of the bucolic and pastoral life that French winegrowers enjoyed. It was a life "of legend and myth, a life which, in many ways, had changed little since the middle ages...plowing was done with horses. Planting, picking, and pruning were done according to the phases of the moon. Older people often reminded younger ones that the merits of pruning were discovered when St.Martin's donkey got loose in the vineyards." The authors have woven together winegrowers tales, geography, viticulture science and French culture to give us a very enjoyable history of "the kingdom of wine" during WWII.Winemaking had a history of troubles even before the war. Phylloxera, an insect that attacked the vines roots, nearly wiped out the industry in the mid 19th century; the Depression followed and then destruction from the trench warfare and artillery barrages of the "Great War". The book reveals an interesting fact about assistance America provided. We know the French are grateful for our fighting on the battlefields during both wars, but some help is probably still a bit hard to swallow. During the Phylloxera blight "the remedy was something totally un-French. Growers discovered that by grafting their vines onto American rootstocks, which were naturally resistant to the root eating louse, they could save them." Lest this fact cause us to swell with pride, the authors tell a humorous story of sacrilege committed by an American Colonel, sufficient to embarrass wine lovers everywhere. After an Allied operation near the Rhone river, the French, in gratitude presented some of Burgundy's finest wines to the Americans. Being naturally hospitable we invited French soldiers and their General to share. The "waiters marched in bearing the bottles on silver trays [the bottles] were bubbling gently"; the Colonel had ordered the wine be served hot, heating it with medical alcohol. The authors say that the French General "faced with the greatest crisis so far in Franco-American relations" nevertheless drained his glass but "murmured, 'Liberation, liberation, what crimes have been commited in thy name!'". Humorous anecdotes and tales of bizarre behavior are scattered throughout and are used to show how the French had an all consuming passion for preserving their national treasure. The account of Operation Anvil is a perfect example. French and American troops were to attack from southern France, through the Rhone Valley and Burgundy, and link up with the Allies pushing out from Normandy. The operation was frought with delays. Perhaps its unofficial name offers an explanation. The Champagne Campaign went through parts of France renown for food, drink, scenery, and entertainment. Some strategic decisions also played a role. French General Monsabert (the same one who suffered the hot libation for liberation's sake) ensured that no more crimes were committed. He planned some attacks and it was no coincidence that the French "advanced

Published by Thriftbooks.com User , 21 years ago
In the incomparable film _Casablanca_, Rick and Ilsa are in a café in Monmartre, worrying about the approach of the Germans to take over Paris. Rick says, "Henri wants us to finish this bottle then three more. He says he'll water his garden with champagne before he'll let the Germans drink any of it." The invaluable Sam then says it takes the sting out of being occupied, Rick says, "Here's looking at you, kid," and the Germans come on. It's a good bet they didn't get any of Henri's prized champagne. That was fictional, but it's true, too. The French had many ways of denying the Germans the pleasures of their vineyards, and many of the ways were overwhelmingly successful. The amazing story is told in _Wine & War: The French, the Nazis, & the Battle for France's Greatest Treasure_ (Broadway Books) by Don and Petrie Kladstrup, and it is a rousing one, a view of the war never before told.It is fun to read the stories of how the winemakers fooled the Nazis, making false walls in their cellars and gathering spiders to the wall, so that they might make the wall look old, or putting bad wine into bottles that bore good labels. It must have delighted the French when they could fob bad wine off as good without the Nazis knowing any better. Many of the cloak-and-dagger operations involving wines and winemakers were far from funny, however successful they might have been. The wine cellars, many of which were labyrinthine caves that had been dug centuries before, proved to be excellent places to hide members of the Resistance. Also, those with cellars turned out to be sources of valuable intelligence. A big shipment ordered for "a very hot country" turned out to be among the first indications the Allies had that the North African campaign was beginning._Wine & War_ explains how the German "wine fuehrers" played a dangerous double game, helping the winemakers to keep their trade going. It also gives a vintner's view of the history of the collaboration government of Field Marshal Pétain, who was himself a vineyard owner. It explains how much the memories of wine helped inspire French prisoners of war, and how the dangerous furtive manufacture of copper sulfate (used to combat fungus) was carried out underneath the nose of the Germans, who wanted copper for the war effort. It shows how although many of the vineyards at liberation were ruined, some of them could break open their walled-up bottles and sell them to gain funds to get everything started again. This is a fascinating book which will please those interested in the history of the period, as well as those who know something about wines. Ronald Barton, who ran estates in Bordeaux, used to make it a practice to drink one of his good bottles of wine with dinner throughout the war. His private toast was, "Here's one less for the Germans if they win, one less for my heirs if we do." Winemakers throughout France helped in many surprising ways to make it the heirs' loss.

Published by Thriftbooks.com User , 21 years ago
The Kladstrups have written a fine account about a little known aspect of both the wine world and World War II. The myriad machinations of French winemakers to keep their best wines out of German Army cellars are fascinating. So too are the many tales of subterfuge: some subtle, some rather dangerously overt. I first met Don Kladstrup in 1976, when he was a reporter for CBS News and I was a freelance cameraman. We spent much time together during the hostage crisis in Iran, and I was always impressed by his writing. When you read WINE & WAR, be sure to have a glass of fine Bordeaux at your side- it adds a certain air of verisimilitude.
Trustpilot
Copyright © 2022 Thriftbooks.com Terms of Use | Privacy Policy | Do Not Sell or Share My Personal Information | Accessibility Statement
ThriftBooks® and the ThriftBooks® logo are registered trademarks of Thrift Books Global, LLC