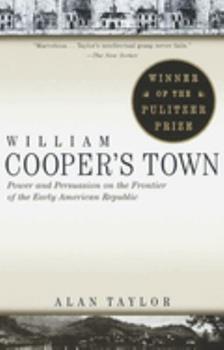 William Cooper's Town: Power and Persuasion on the Frontier of the Early American Republic

William Cooper and James Fenimore Cooper, a father and son who embodied the contradictions that divided America in the early years of the Republic, are brought to life in this Pulitzer Prize-winning book. William Cooper rose from humble origins to become a wealthy land speculator and U.S. congressman in what had until lately been the wilderness of upstate New York, but his high-handed style of governing resulted in his fall from power and political...

Published by Thriftbooks.com User , 17 years ago
What a pleasure, what a joy to read this book. It's rare that history rises to such a wonderful pitch -- anecdote, analysis, historial context all wrapped up in one fine package. I stumbled onto this book while perusing library shelves while my daughter picked out some kid books for herself. Since it won a Pulitzer, I thought I'd take a look. And I was treated to an amazing amalgam of history, economics, politics, and literary analysis. I love books that explore myths and then separate the fact from fiction, and I can't think of any that have done it in a more entertaining way. If you like history, you'll love the sweep of about 50 years on America's early frontier. If you like politics, you'll love to learn about early New York political machines. If you like economics, you'll learn all about how trading economies were built almost from scratch in the States. And if you like name-dropping, there's everyone from Alexander Hamilton to Aaron Burr to Thomas Jefferson to James Fenimore Cooper.

Published by Thriftbooks.com User , 18 years ago
That's a pretty pretentious word to use and Taylor's book does begin to plod at some points but I think this is a fascinating account of early American pioneers. Taylor looks at William Cooper, the father of the author James Fennimore Cooper and his founding of a town in the wilderness of western NEw York just after the Revolution. In tracing the rise and fall of the fortunes of the Cooper family and Cooperstown, he gives us a great account of early American politics and life. Taylor reminds us that the edge of the Northeast was once a wild and unsettled frontier. he also shows us that the frontier, far from being some sort of idyllic outpost, was intimately connected, economically and politically, with the rest of the nation. At the same time he gives us an important social and political look at the post Revolutionary US where a man like William Cooper, a humble workman from NEw Jersey was able to work his way into becoming one of the most well respected land speculators in the country. Taylor wraps up the book with a look at the legacy of the Cooper family and how James Fennimore Cooper became a major influence on how Americans viewed the frontier. Overall a great book and worth the time and effort to read it

The Struggle for Gentility on the Frontier

Published by Thriftbooks.com User , 19 years ago
William Cooper lived through the most prolific time of change in American history. And in telling the story of his time and life Alan Taylor has delivered to his audience a compelling documentation and narrative of how this period of remarkable transformation affected one individual and his family, the settlement of the New York frontier, and the political landscape of the frontier. William Cooper's Town is, first and foremost, a biography, yet it also functions as a regional history, and a literary analysis of James Fennimore Cooper's the Pioneers. With respect to these three features, Taylor divided his book into three sections: ascent, power, and legacies. Each tells a different story of William Cooper and exposes disparate characteristics of his personality and his success as a land owner and speculator, politician, and father (both of the people and of his children). Most important, each section of Taylor's unique book relates to Cooper's ambition for gentility, something which he vehemently strived for both in himself and his children. The reader gains a keen sense of the difficulty and unpredictability of frontier settlement from William Cooper's Town. Cooper acquired and lost his entire fortune in twenty-five demanding and challenging years. In addition, Cooper exemplifies the restraints left on social mobility even after the American Revolution. Cooper never obtained the greatly sought after gentry status. Taylor's story of William Cooper widens our perspective of the early Republic. The era dominated by elite political figures like George Washington, Thomas Jefferson, Alexander Hamilton, and John Adams, also included important characters on the periphery. While much of the United States early success is owed to the "founding fathers" its expansion must also be credited to men like William Cooper even if he was not a political genius and erudite. Taylor's book is not a survey; rather it is mostly William Cooper's story. It is not the complete social, political, and economic history of the New York frontier. The closest Taylor comes to this is his discussion of political debates within Otsego County which effected the entire state's political status. Still, Taylor's book will certainly support anyone who researches a broader study in the future.

FATHER WAS THE PIONEER

Published by Thriftbooks.com User , 21 years ago
The tale of James Fenimore Cooper's father on the New York frontier in the 1790s is an Horatio Alger story run amuck. Born to a poor Quaker farm family, William Cooper learned the craft of making and repairing wheels before reinventing himself as a land speculator, founder of Cooperstown, judge, congressman, patrician farmer and Federalist party powerhouse.Alan Taylor's WILLIAM COOPER'S TOWN: POWER AND PERSUASION ON THE FRONTIER OF THE EARLY AMERICAN REPUBLIC is an outstanding biography of an archetypical American character, an extraordinary social history of life and politics on the late eighteenth-century frontier and a brilliant exercise in literary analysis. This is a wonderful read. Taylor's lively prose, compelling narrative and original, fresh story sustained my interest from cover to cover. I never would have imagined such a dull title could cover such a marvelous book. WILLIAM COOPER'S TOWN certainly deserves the Pulitzer Prize it was awarded.Taylor not only describes William Cooper's rise from rags to riches and even more meteoric fall but analyzes Cooper's political odyssey in America's frontier democratic workshop."As an ambitious man of great wealth but flawed gentility, Cooper became caught up in the great contest of postrevolutionary politics: whether power should belong to traditional gentlemen who styled themselves 'Fathers of the People' or to cruder democrats who acted out the new role of 'Friends of the People.'"Taylor argues "Cooper faced a fundamental decision as he ventured into New York's contentious politics. Would he affiliate with the governor and the revolutionary politics of democratic assertion? Or would he endorse the traditional elitism championed by...Hamilton." "Brawny, ill educated, blunt spoken, and newly enriched," writes Taylor, "Cooper had more in common with George Clinton than with his aristocratic rivals." "For a rough-hewn, new man like Cooper, the democratic politics practiced by Clinton certainly offered an easier path to power. Yet, like Hamilton, Cooper wanted to escape his origins by winning acceptance into the genteel social circles where Clinton was anathema." Taylor concludes "Cooper's origins pulled him in one political direction, his longing in another."James Fenimore Cooper's third novel, THE PIONEERS, is an ambivalent, fictionalized examination of his father's failure to measure up to the genteel stardards William Cooper set for himself and that his son James internalized. The father's longing became the son's demand.Taylor analyzes the father-son relationship, strained by Williams decline before ever fully measuring up to the stardards he had set, and the son's fictionalized account of this relationship.James Fenimore Cooper spent most of his adult life seeking the "natural aristocrat" his father wanted to be and compensating for his father's shortcomings. It is ironic that the person James Fenimore Cooper found to be the embodiment of the "natural aristocrat" his father had lo

Published by Thriftbooks.com User , 23 years ago
This is the story of William Cooper, the founder of Cooperstown, New York, and of how his son, James Fenimore Cooper, used his father's life and experiences in his novels. Described in this way, this sounds like a narrow book, of interest mainly to specialists. But anyone interested in early America should read this book: it reveals truths not only about these two men but about the whole period. One of the key themes of the book is that the Revolution, which in a sense made William Cooper by pushing aside the old aristocracy of New York, also unmade him by creating an anti-aristocratic politics that ousted him and other Federalists in 1800. A fascinating minor detail: the city fathers, in their effort to maintain a proper tone in Cooperstown in the early 1800s, outlawed stick ball, the precursor of baseball.
Trustpilot
Copyright © 2022 Thriftbooks.com Terms of Use | Privacy Policy | Do Not Sell or Share My Personal Information | Accessibility Statement
ThriftBooks® and the ThriftBooks® logo are registered trademarks of Thrift Books Global, LLC