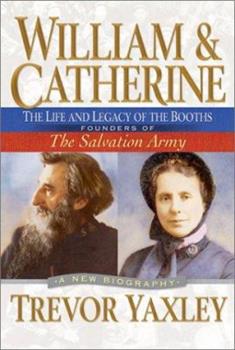 William and Catherine: The Life and Legacy of the Booths: Founders of the Salvation Army

After William Booth and Catherine Mumford found God, He led them to each other. Sharing a passion for the glory of the Lord and for the rescue of desperate, destitute people, together the Booths gave their lives to deliver the good news of salvation and to spiritually and physically uplift those in need. William and Catherine Booth joined innovation to tradition in preaching "the power of the blood of Christ and the fire of the Holy Spirit." Even...

The Salvation Army - How It All Began

Published by Thriftbooks.com User , 15 years ago
This wonderful book, published in 2003, will answer all your questions about the Salvation Army. I always wondered how it all began and when, and how it has evolved. I hope Mr. Yaxley will consider a sequel and write about the Army as it exists today. This book ends just as Evangeline Booth begins her leadership in America in the last century I recommend this biography by Trevor Yaxley because of all the information, the look inside England in the mid eighteen hundreds, the easy to read can't put this book down style, and the almost unbelievable accomplishments of these two beloved people, William and Catherine Booth. There is a timeline and family tree in back of the book as well as good pictures. The epilogue, entitled The Challenge, consists of the last public address by Catherine Booth, to two thousand delegates of her "army" in London on June 21, 1888. It is remarkable, challenging, and inspired. Quoting from the first chapter is a paragraph by Paul Smith - here it is: "On April 9, 1865, Robert E. Lee met Ulysses S. Grant in the parlor of a private home at Appomattox Court House. He surrendered his army, bringing to an end four long years of death and devastation called the American Civil War. In the same year, a thirty six year old Englishman by the name of William Booth declared war on the powers of darness by founding The Salvation Army." The multitudes of people living in poverty and without dignity inspired the Booths to declare this spiritual War and with great love and compassion, they gave hope to the helpless by offering faith in God (salvation thru Christ) food (soup kitchens) clothing, and employment, and a purpose (serving in the Army to help others as they were helped and lifted up). The story of the Booths is all about a couple in love and a passion for helping desperate destitute people and giving spiritual and physical help - so innovative was their work, that what began in England gradually spread throughout the world and they also raised many children who continued in the work of helping the poor. Today, the Salvation Army is first to appear when disasters occur anywhere in the world - want to join! I loved the book and you will too. I never even imagined what this "Army" was all about until I came across this biography.

Published by Thriftbooks.com User , 18 years ago
Sensitive, engaging, historical account of the lives of the two founders of the Salvation Army. Peronal letters between these two sweethearts, then husband and wife as well as life-long evangelists, detail the outstanding faith and human struggle it took to start an army in the slums and in opposition to the "old church hierarchy" which did not want to deal with the "riff-raff." The dedication of the first salvationists often meant placing themselves in harms way as angry mobs jeered and soldiers lost their lives. Still, the Army grew stronger and stronger. Every paragraph in this book is engaging...and I generally find historical accounts very boring. If you are looking for an exciting and sensitive historical account and wish to be enaged spiritually as well, this is a must read.
Trustpilot
Copyright © 2022 Thriftbooks.com Terms of Use | Privacy Policy | Do Not Sell My Personal Information | Accessibility Statement
ThriftBooks® and the ThriftBooks® logo are registered trademarks of Thrift Books Global, LLC