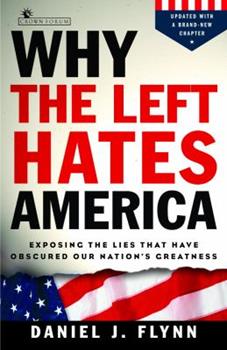 Why the Left Hates America: Exposing the Lies That Have Obscured Our Nation's Greatness

"The American flag stands for hatred, warmongering, and imperialism." "Our free-market system is responsible for killing and oppressing millions of people." "This country breeds racists and sexists." Is America really that bad? It is if you accept the lies and propaganda from the anti-American Left in our own country. This dismal, distorted view of the greatest, freest nation in history comes from a Left who would rather idolize Ho Chi Minh and Fidel...

Published by Thriftbooks.com User , 16 years ago
Daniel Flynn does a great job arguing his case that the left generally, and academia specifically, are consumed with an anti-American agenda. He starts with a large series of anecdotes that followed 9-11. They consist of mainly stories and quotes from college profs, students, and protesters who blame "Amerika" for the death of nearly 3,000 Americans that day. Flynn then explores the roots -- both historical and intellectual -- of anti-Americanism. He traces it back to the Industrial age of the 19th century, where changes in the economy (i.e., prosperity) brought with it a mantra that hasn't stopped since-- economic inequality. This increase in wealth allowed for the formation of a leisure class to contemplate their guilt. And these wealthy individuals, using their time to ponder such issues, became America's first intellectual/anti-American class. This new anti-American class, however, was unorganized and thus resorted to using "bombs and bullets" instead of articulating a coherent refutation of American society. The author then runs us through these violent events. Flynn then proceeds into the 20th century, exploring the more organized groups that made up American communism and the subsequent Frankfurt School (i.e., Critical Theorists). According to Flynn, the latter development was created in light of the worldwide economic failure of Marxist ideas. Sensing the waning popularity of traditional Marxist thought, these would-be traditional Marxists did something quite clever. Just as a species must adapt to a hostile environment to avoid extinction, so too must an ideology, or a memeplex, adapt to survive in people's minds when faced with facts that fail to support it. The clever move by the CT's was to deny that the struggle between the oppressed and the oppressors was merely a class issue between the proletariat and the bourgeoisie, but rather the oppressed are several categories that are much less malleable: Race, Class, and Gender/sexual orientation. These categories, unlike class, are much more durable over time. There will always be women, blacks and homosexuals. This ensures the survival of their holy doctrine. Anyone who has taken a sociology class during the last 30 years will recognize this simplistic, crypto-religious depiction-- complete with its own Holy Trinity (Race, Class, and Gender)_-- and like religious belief, this worldview of the oppressed vs oppressors takes no small amount of faith to accept. Flynn then moves his attack to the Multiculturalists. His primary claim is that proponents of multiculturalism, since all cultures are not equal, will engage in "leveling" i.e., comparing the worst of the West with the best of other cultures. He provides ample evidence to support this accusation. So, as Fylnn says, the view of much of the left that "all cultures are equal" is a result of this process of leveling. But what if it is discovered that a culture seems to have rather primitive practices? No worries;

Published by Thriftbooks.com User , 18 years ago
Most of the people that have written reviews that say this book is shallow have obviously not read the book. These people have obviously read nothing more than the title of the book and possibly the blurb on the back. I feel that they have chosen to "review" the book just to keep others from even considering reading it. Dan Flynn does not define the LEFT as people who are merely liberal or Democrats. The LEFT in his mind is something completely different from the vast majority of America, and they are hardly represented in our government as well. He defines the LEFT as extreme and radical. They include people like movie stars with the bully pulpits who constantly tear down our country. These are the people who say terrible things and then run to other countries to hide all the while spending money made by entertaining an uninformed public. Before you close your mind to this book, make sure that you know what the book is about. The person who said that he is talking about 30 percent of the population obviously did not even read through the first pages of the book. This book is about a much smaller and far more dangerous population.

A Much Needed Antidote

Published by Thriftbooks.com User , 18 years ago
First a review about the other reviews (something I have never done or felt the need to do but in this case it is warranted) and then a review about the book.MEGLIN1228 & SCOTRUGBY ReviewsYou need to READ and then THINK and then try to COMPREHEND the book before you review it. If you did you would have found out these things. The book over and over states the difference between liberals, who DO NOT hate America and what the book defines as those on the left, WHO DO. The author continually speaks about the founding fathers and usurpation of the constitution as being a threat to America. One of his strongest points is that the first amendment must be embraced so we CAN HAVE discourse on both sides of the issues. Nowhere does he even suggest the antithesis of this.DUSTIN NEUMANEach study that I have read has shown the anti-podal of your belief. The higher the IQ the more likely to be conservative, while the lower the IQ the more likely to embrace liberal philosophies. Sorry Dusty, the truth hurts, try to live in reality. PHILLIP1. The author encourages disagreeing with presidents and even gives a great story about Thomas Jefferson encouraging this as a staple of liberty in the book (198-199)2. Questioning war is not anti-American, it is healthy as the author points out, what is anti-American is showing only the worst of war and claiming that this is the norm. (30, 45, 86, 129, etc)3. Please read his book Phillip, you might understand how wrong you are.JOESPH LINDEN & A reader from San DiegoYou say he forgot to mention "slavery" Try READING these pages 9, 33-39, 61, 90-96, 126-128, 150 - 158, 178-180, 211. Flynn covers slavery comprehensively; perhaps if you had READ the book you wouldn't seem so ignorant.PHILIP PALMERYou have your panties in a bunch about fascism, but if you took time to read the book you would find that Flynn attacks Fascism too. It makes sense since the book is titled "Why the LEFT hates America" that the author would go after the left's only success in governing, Fascism. For more info. READ 54-57. S ROSSThank you for reading the book, your review was very well done. Just one comment, you wrote "While he makes a strong case that life in the U.S. is better than most developing countries, he conveniently omits almost any comparison to other industrialized nations." The argument THE LEFT has is that WESTERN civilization is worst than NON-WESTERN civilizations, what the author has done is compare America (representing the West) to non-western civilizations. This is the only fair comparison since it responds directly to the left's argument. BTW he does in many cases, go on to compare America afterwards to the likes of Japan, France, Great Britain, Germany, etc. MY BOOK REVIEWFirst of all the title is BAD and noxious; I wasn't going to read this book because of it, but I was assured by a friend that it was not malicious tripe. I was surprised the writing inside is very good, there is no malice even to those whom the author disagree

Published by Thriftbooks.com User , 18 years ago
Daniel Flynn has done a remarkably cogent and level-headed job of examining and revealing why there is a faction of Americans in this country who have been indoctrinated to hate themselves and their prosperous country - a strange phenom that has been increasingly evident since the horrific attacks of 9/11. All of the sudden, more than ever before, all the ills of the world are the fault of the USA. Flynn probes the origins of this bizarre trend - and what he uncovers has a decidedly sinister base (Communism). But Flynn writes with intelligence and care. This book should be taught in high schools and on college campuses.

This is worth reading and enjoyable too!

Published by Thriftbooks.com User , 18 years ago
Inflammatory? Yes. Does this author deliver over-the-top narration about the holes in his adversaries? opinions? Yes.Does this author have a good point? Absolutely!This book outlines some of the arguments posited against the longest standing democracy in the world. While he readily acknowledges the shortcomings of our current system, he decries the Left/Socialist critique of America. Dating back to earliest attempts to subvert our democracy by Socialism and chronicling the various attempts after, Flynn documents the history of Communism/Socialism?s chronic attacks on our freedom and way of life. Starting with Marx, W E B Du Bois, the US Communist Party, and their illegitimate offspring ?multi-culturalism?, Flynn gives a blow by blow account of how the jealous elite wants to subvert all of our freedom.If you have become frustrated by the continuing liberal slant in the news media and from the universities, this is your road map for understanding what is really behind the nonsense. This is your chance to unlearn the unsupported attacks on our country and its founders that you received in school.Deal with the hyperbolic language and you will find this a well-researched gem that with help you understand the wellspring of Leftist whining and extremists attacks on our country. It may also help you ?re-educate? the brainwashed liberal next door.
Trustpilot
Copyright © 2022 Thriftbooks.com Terms of Use | Privacy Policy | Do Not Sell My Personal Information | Accessibility Statement
ThriftBooks® and the ThriftBooks® logo are registered trademarks of Thrift Books Global, LLC