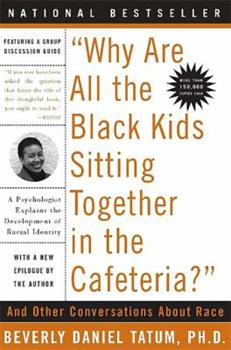 Why Are All the Black Kids Sitting Together in the Cafeteria: And Other Conversations About Race

The classic, bestselling book on the psychology of racism-now fully revised and updated Walk into any racially mixed high school and you will see Black, White, and Latino youth clustered in their own groups. Is this self-segregation a problem to address or a coping strategy? Beverly Daniel Tatum, a renowned authority on the psychology of racism, argues that straight talk about our racial identities is essential if we are serious about enabling communication...

Published by Mel , 7 months ago
I feel like a lot of the identity concepts in this book are already familiar for people of color, but it still affirms your feelings and eloquently puts words to them. The book also helped me personally understand the situation that white people are placed in and helps me empathize and see racial dialogue through their perspective. It's extremely useful and the author herself is very patient and understanding that people are all in different parts of their journey of self discovery/identity development. I highly recommend this book to anybody but especially white people who seek a starting point of understanding their own feelings as well as the feelings of people of color.

A critical look at racial awareness and identity development

Published by Thriftbooks.com User , 17 years ago
Not until recently have I, as a 20-year-old white American college student, really become aware of the extent of my own white privilege and what it means to be white in America today. Even the fact that I was able to go for so long without recognizing the significance of race in my life is a manifestation of my white privilege. Children of color, however, are generally confronted by the fact of their race at a much earlier age. Their process of identity development differs significantly from that of most white children. This is the issue psychologist Beverly Tatum discusses in her book. She opens with the question that forms the book's title: "Why are all the black kids sitting together in the cafeteria?" It is common to see high school students self-segregate, socializing in groups composed mostly of others of the same racial background. But why is this? Because Tatum herself is a black woman, she predominantly addresses the identity development of black individuals. She cites psychologist William Cross in describing the stages of development: pre-encounter, when young children simply absorb the messages they receive from those around them, not yet having reason to question them; encounter, when an individual first becomes aware of racism through some "event or series of events that force the young person to acknowledge [its] personal impact" (55); immersion/emersion, when the individual works actively to learn about and affirm their own racial identity; and internalization/commitment, when the individual has established a positive personal identity for him/herself. Throughout, Tatum offers explanations for the behaviors many black adolescents may engage in which may puzzle their white counterparts, including the reason for student self-segregation along racial lines. Tatum also provides tips for black parents looking for ways to help their children successfully deal with the racism they encounter and develop a positive sense of self. Tatum then goes on to discuss the identity development of white people. Because white individuals are a part of the dominant culture in the United States, they are often oblivious to the fact that they, too, are a part of a racial group. "But I'm just normal!" they may say (93). However, this mode of thinking can and does cause significant problems for whites and people of color alike. Tatum analyzes these problems and their roots, and explains how white parents can raise their children to have a positive awareness of race. She debunks the popular idea that it is best to be "color-blind," revealing the damage this ideology does and why racial awareness, when free of negative prejudices and stereotypes, is actually a good thing. Tatum also discusses, more briefly, the identity development of Latino/Hispanic, Native American, Asian American, and biracial individuals, and the issues unique to each ethnic grouping. White readers may have some trouble with this book for a variety of reasons. Some may be offended, as

Published by Thriftbooks.com User , 18 years ago
In the 1999 introduction to the revised edition of "Why Are All The Black Kids Sitting Together In The Cafeteria?" And Other Conversations About Race: A Psychologist Explains the Development of Racial Identity, Beverly Daniel Tatum explains that she wrote the book not only to answer questions like the title question but also "to help others move beyond fear, beyond anger, beyond denial to a new understanding of what racism is, how it impacts all of us, and ultimately what we can do about it" (pg. ix). For persons of standard average European background surrounded, for the most part, by others who share this delineation, race is often the elephant in the living room; everyone knows it is there, but nobody is talking about it. Reading this book forces one to look at the elephant; however, not everyone will agree upon what it is they are seeing.Tatum divides the text into five parts, unequal in both length and value. Many white readers may never get past the first chapter, as the definition of racism included will make them too uncomfortable. Understanding and accepting the described definition of racism as a system of advantage is central to distilling meaning from much of what follows. As long as readers continue to resist the concept of institutional racism, the subsequent sections on black identity (part 2), white identity (part 3), multiracial identity (part 4), and cross racial dialogue (part 5) have little meaning. Although it is necessary to begin the book with a discussion of terminology, the idea that only white people can be racist immediately sends up red flags to those raised to believe racism is a personal evil, born of vicious intent. This makes using Tatum's book in an educational context difficult, unless readers work to overcome these feelings and, at the very least, suspend disbelief regarding the definitions for the duration of the book.Section two, "Understanding Blackness in a White Context," is a decent explanation of the work of Cross, explaining the stages of the development of racial identity. To make this section more readable and interesting, Tatum adds personal stories to illustrate the stages. For white people working with black children, teens, or adults, reading this section may illuminate previously misunderstood issues. Section three, however, truly sets this book apart from other books on racism and minority identity. "Understanding Whiteness in a White Context" discusses the identity formation of white individuals as well as affirmative action. Readers who were distinctly uncomfortable with the first section may feel somewhat soothed by the chapter on white identity, recognizing themselves more easily in the portrait of a child raised to be "colorblind" than in the definition of racism. This chapter is important because it shows the system of racism affecting white people as well as people of colour. As part of the "norm" of American society, seen by others as individuals rather than representatives

Vital handbook for our country

Published by Thriftbooks.com User , 22 years ago
This book ended up being both informative and intersting, a set of adjectives which frequently do not walk together. However, Dr. Tatum has masterfully tackled a controversial topic, explained it in a perfect blend of academic and common-sense language, and put forth a pro-active plan for thinking which is innovative and exciting.This book starts us from the beginning by deconstructing the very ideas of "white" and "black," and by discussing the terminology itself. From there, she begins to talk about social models of behavior and more complex ideas, but she never loses the "essential" nature of her subject.Dr. Tatum's book is perfect for anyone who ever plans to have children or who works with them, because it deals with the effects that race relations have on kids. This under-studied field is, in my opinion, one of the most important because it is children who are harmed the most by polarized race relationships. Dr. Tatum discusses tools for dealing with children throughout the book, citing practical examples and giving the reader a place to go from the last page of the book into real life application.Highly recommended.

The best book on race relations since 'From Superman to Man'

Published by Thriftbooks.com User , 22 years ago
Dr. Tatum explains beautifully many previously undiscussed aspects of race relations in America. But she also goes beyond what IS to explain WHY it is. Her explaination of how each of us develop our own sense of racial and ethnic 'self' provides great food for thought. Tatum's background, area of expertise, experience and sensitivity combine to make her the perfect author of such a work. She gave me insight into my own long-held feelings of guilt about being a benificiary of white priviledge. Particularly poignant were stories of how she discussed racial issues with her own children as they were growing. Every chapter so intrigued me that I would like to read an entire book dedicated to each of the topics. In a perfect world, this book would be required reading for all Americans and should be assigned to every high school student in this country. I don't remember the last time I was as moved by a book and I can't wait for her next one! Thank you, thank you, thank you Dr. Tatum! Each of us who is ready to take a look inside ourselves and be completely honest about our own biases needs to read this book! It will make us better Americans, better humans and better friends.

A must read for understanding who we are as Americans

Published by Thriftbooks.com User , 22 years ago
If you are to read one book on American culture this year, let it be this one. This is the clearest, smartest and most accurate description of race, and racism, in America and it should be required reading for every student throughout the country. Working years in urban high schools, being white and seeing hopes and dreams grow and then be dashed with so many of our kids, I have struggled to understand the nature of our culture and who our kids are, and why they behave as they do. This book is the first that really makes perfect sense, and I will give it as a Christmas gift to as many people as I can afford. I hope Tatum provides a followup that focuses on our hardcore, urban poor kids, really the most misunderstood, feared and forgotten in this sad but accurate commentary on our culture. There is still so much to be said, and she is able to say it clearly and wisely.
Trustpilot
Copyright © 2022 Thriftbooks.com Terms of Use | Privacy Policy | Do Not Sell My Personal Information | Accessibility Statement
ThriftBooks® and the ThriftBooks® logo are registered trademarks of Thrift Books Global, LLC