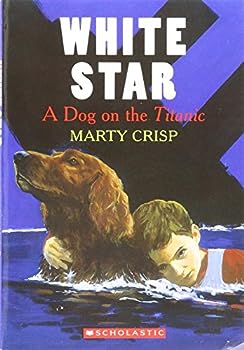 White Star: A Dog on the Titanic

Sam Harris is on the voyage of a lifetime, traveling to New York on the "Titanic". The gigantic ship has every luxury Sam could think of, but there's only one thing that Sam really wants--the Irish... This description may be from another edition of this product.

Published by Thriftbooks.com User , 15 years ago
White Star A Dog on the Titanic, written by Mary Crisp, is about a boy named Sam Harris who is on his way to America to live with his mom and stepfather, and his friendships during the voyage of the Titanic. Sam's two best friends are Bucky and Star: Mr. J. Ismay's award winning Irish setter. Sam is quickly acquainted with all of the dogs aboard, though his favorite is still Star. Then in the morning on April 15th, Sam runs on deck to see that women and children are boarding the lifeboats. Sam's caretaker wants Sam to get into a lifeboat for the Titanic has struck an iceberg. Sam refuses and sprints to the dog kennel to get Star. Once back on deck, all life boats are loaded and Sam is pulled off the boat and into the water by Star. They are then rescued by lifeboat #4 and later picked up by the Carpathia. Sam then arrives in New York and is taken home by his mother, luckily with Star. I definitely recommend this novel for dog lovers and anyone who likes adventure. The first reason why I recommend this exceptional novel was for the characters. They were real and/or very believable and you got to know them very well. For example, you know almost right away that Sam's father died of influenza, his mom moved and married a stranger (to Sam), and that he had to leave his grandparents. This makes you feel bad for Sam and so you want him to live or jump in a lifeboat when the Titanic sinks because you are "on his side." Another character you come to like is Robert Daniel, who automatically becomes friends with Sam and has a dog. He is a caring and clever man who was a real survivor of the Titanic! Because Mr. Daniel, Bucky, the kennel boy-Finn, and the dogs are nice to Sam, the reader is more concerned and interested in those characters. I also really liked how this novel was arranged. For every chapter was a name, date, place, and time which did two things. First of all, it made the novel much more believable since the dates, places, and times were real, researched facts. Secondly, the titles on the chapters helped to summarize the chapter. For example, Chapter 8 was called "Not Without My Dog" (the Titanic was somewhere in the Atlantic Ocean) with the subtitle "Monday, April 15, 1912, 12:30 a.m." From the date and title you can tell that Sam wouldn't leave the Titanic without Star and that the Titanic had not sunk yet. Another chapter was called "On the Carpathia" which told the reader that the survivors were picked up by another ship and would survive to tell the story of the Titanic. Another reason that I recommend this book is because after the wonderful, though fictional, story of Sam and Star, there are 14 pages of non-fiction material about the Titanic. The mini-information bank includes the map of the Titanic's voyage, a timeline for the massive ship, a four-page long diagram of the Titanic, facts, mysteries, survivors, and victims of the Titanic. The listed survivors and victims were characters in White Star who

Published by Thriftbooks.com User , 15 years ago
This book is called 'White Star". It's by Marty Crisp. I foud this book very intresting.It's about a boy named Sam on the Titanic. Sam would visit the dog shelter every day and bond with a dog named White Star.One night an iceburg hit the boat.Everyone started sinking into the ocean, exept White Satr and Sam.White Star was such good friends with Sam the he couldent risk loosing him.And thats how White Star saved Sam's life.I can recomed this book to anyone!It's that good! by: Melanie DeCampos

Published by Thriftbooks.com User , 16 years ago
I liked this book because it had imagination for the main character Star. I also liked that the story was based on a real event - the sinking of the Titanic. The book was challenging but not too hard. Parts of the book were sad too. I would recommend the book because you really feel like you are experiencing everything Sam and Star are experiencing.

A Wonderful Story of Adventure

Published by Thriftbooks.com User , 17 years ago
White Star A Dog on the Titanic, by Marty Crisp, is a great adventure story. The book is about a twelve-year-old boy named Sam Harris who is a passenger aboard the ill-fated Titanic. Sam is on his way to America to meet his mother and new stepfather after spending six years with his grandparents in England. Sam spends most of his time on the Boat Deck where the dog kennels are kept. He befriends an Irish Setter, that he names Star, who actually belongs to Joseph Bruce Ismay. The book takes the reader through the beginning of the voyage and introductions of many important people to the actual sinking of the boat as well as the rescue of the survivors by the Carpathia. The book's final chapters deal with the survivors as they arrive in America. The fictional aspect of the book holds many suspense filled moments and surprises for everyone. Speaking as a teacher, the book does a very good job of blending facts about the Titanic with the fictional story of a boy who has found a true friend in a dog. Marty Crisp includes a map of the Titanic's voyage, a illustration of the decks on the boat, a time line of events, fascinating facts, and mysteries of the Titanic. He also includes a list of survivors as well as victims. This chapter book is a great read for late elementary students who have an interest in the Titanic as well as dogs.

THE BEST BOOK IN THE WORLD!!

Published by Thriftbooks.com User , 17 years ago
The first time I read this book, in school, i fell in love with the book. I love the story and the characters. I like it because it really shows the relationship of a dog and person and it inspired me and i'm sure alot of other people to get a dog. the story is about a boy named samuel (sam) harris who is on the Titanic and meets this Irish Setter that looks just like his old dog. the setter was golden-brown and has a white star-shapped splotch on his chest. sam treats the dog like his own, though he belongs to Joseph Bruce Ismay. it all comes together at the end, but i'll leave it to you to read and i hope you will because its a great book and its about a true story. so, all of you bookworms out there, go to your library today!
Trustpilot
Copyright © 2022 Thriftbooks.com Terms of Use | Privacy Policy | Do Not Sell or Share My Personal Information | Accessibility Statement
ThriftBooks® and the ThriftBooks® logo are registered trademarks of Thrift Books Global, LLC