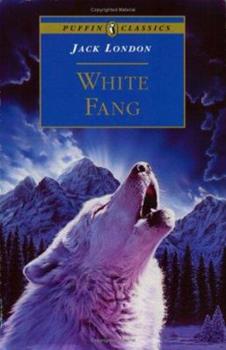 by Jack London, NOT A BOOK, jack londan, et al.

Born in the wilds of the freezing Yukon, the wolf-cub White Fang soon learns the harsh laws of nature, growing fiercer and more independent in his struggle to survive. Yet buried deep inside him are distant memories of affection and love - can he learn to trust man again?

Published by Thriftbooks.com User , 11 years ago
This book was just right. It's a great story about a dog who goes owner to owner to owner. Each owner tells him to do something different. The first owner he had told him to dogsled. He was a good dogsleder until, one day, he escaped from the owner. He was now in the wild. He left because he met a girl-wolf. They had children and they were happy. Soon they found an indian camp and the indian's gave them names and that's how White Fang got his name. His next owner was a very mean owner. He made White Fang do dog fights with other dogs. Even though he won every time, he was injured every time. One time, there was a new dog in town. He beat White Fang in seconds. A guy in the crowd brought White Fang from the owner and he tought White Fang to not attack everyone. This book is a great family book. If you like dogs, you will like this. It shows how White Fang changes after every new owner he has. So go get this book at a library or a book store.

Published by Thriftbooks.com User , 11 years ago
when i was in third grade - back in 1993 - i bought my first book with my own money at a school book fair.... the author was Jack London and yes being a kid i bought it for the cover... but i DID read it and i fell in love with the whole Alaska/history/dogsledding/gold rush plot. i bought other books by Jack London but Whitefang and Call of the Wild stood out among them. At the time when i read them i was a kid(a girl!) raised on PBS and Disney movies..... these books were a cold splash of much needed reality on the way nature REALLY works: Something everyone needs to learn at some point before it's too late. I still have my battered old copies of these books and they are waiting for the day when my two sons are old enough and ready to read them. They are short, easy to read, easy to understand, and they still have an amazing plot. nothing today compares to these "to the point" books. there is no drowning in detail or wading through boring dialogue. its non-stop action from beginning to end.

Published by Thriftbooks.com User , 12 years ago
This is good and bad: On the good side, it is a great story and my son loved it. The bad part is that, after reading it, he decided he needed a puppy. Beware!

Published by Thriftbooks.com User , 12 years ago
Gold was found in Alaska, the rush to obtain it required a strong constitution and many dogs to do the work that horses usually did in the states. The environment bread harsh attitudes. Also in the testing of ones mettle one finds their true potential. Buck (a dog that is half St Bernard and half Shepherd) goes through many lives, trials, and tribulations finally realizing his potential. On the way he learns many concepts from surprise, to deceit, and cunning; he also learns loyalty, devotion, and love. As he is growing he feels the call of the wild. This book is well written. There is not a wasted word or thought and the story while building on its self has purpose and direction. The descriptions may be a tad graphic for the squeamish and a tad sentimental for the romantic. You see the world through Buck's eyes and understand it through his perspective until you also feel the call of the wild. The Call of the Wild - Dog of the Yukon (1997)

One of the best books I have ever read.

Published by Thriftbooks.com User , 19 years ago
White Fang deserves two huge thumbs up. It is exciting, touching, and sometimes kind of silly. Jack London did a very good job writing this book. This book is about a wolf that had a part-wolf and part-dog mother and a wolf father. The book starts out telling about the mother's journey, but quickly turns to the son called White Fang. Eventually White Fang gets domesticated and the Native Americans turn him into a sled wolf. The only thing I did not like about this book was in the very beginning. The author thrusts you into the story without any explanation. I wish the story was set up more. This book rates with my favorite books. Jack London does well at showing the feelings of non-human characters along with the differences between the old Native Americans and the new settlers. I think you should buy this book and enter the world of White Fang.
Copyright © 2020 Thriftbooks.com Terms of Use | Privacy Policy | Do Not Sell My Personal Information | Accessibility Statement
ThriftBooks® and the ThriftBooks® logo are registered trademarks of Thrift Books Global, LLC