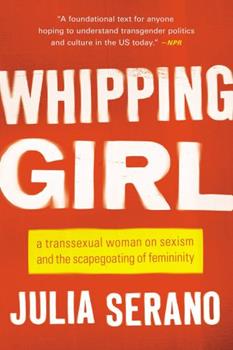 Whipping Girl: A Transsexual Woman on Sexism and the Scapegoating of Femininity

In the updated second edition of Whipping Girl, Julia Serano, a transsexual woman whose supremely intelligent writing reflects her diverse background as a lesbian transgender activist and professional biologist, shares her powerful experiences and observations--both pre- and post-transition--to reveal the ways in which fear, suspicion, and dismissiveness toward femininity shape our societal attitudes toward trans women, as well as gender and sexuality...

Published by Thriftbooks.com User , 13 years ago
Few books are genuine pathbreakers, but this is one of them. The author combines analysis of feminist texts, the psychiatric medical profession, popular (sexist) culture, and personal experience to produce a book that truly leads the way. Ms. Serano points out the kinds of pressure and discrimination that make life difficult for "trans" people, those whose sex at birth does not fit with their own feelings of gender. The "gatekeepers," as she calls them, are people with an agenda, and the greatest focus is the requirement that a person desiring to transition from physical male to physical female, want and expect to be heterosexual. There is additional pressure to keep everything confidential, to move away from family and friends...and all this, not to help the trans person, but to keep the normal heterosexual people comfortable. She explains at length the kinds of contradictions that are foisted upon a person who experiences "gender dissonance"--the non-congruence of one's "assigned sex" (physical sex at birth) and one's self-feeling of gender. This latter she calls "subconscious sex," pointing out that people who never experience this profound disjunct ("cissexual," she calls them) understandably don't comprehend this emotional chasm. While it's challenging at times to incorporate the several new terms she coins, there appear to be good reasons for all of them. We have to have some words to refer to things not previously named, and the existing psychiatric language is so skewed, that it is both a "slam" on trans people and operates from profound ignorance of trans people's life experiences. For the most part, though, this book--which is a collection of long and short essays--is written in common language, and fluently so. She does lapse into the academic habit of writing "I would argue..." but this is hardly a major failing in a text that has a lot of important ideas. Argue she does, and cogently so. I was persuaded by her point of view, insofar as I understand it. She movingly describes the plight of the person who discovers they are not cissexual, writing that ..."This gender dissonance is usually experienced as a kind of emotional pain or sadness that grows more intense over time, sometimes reaching a point where it can become debilitating." Sometimes, it results in suicide, especially for those trans people who are unable to persuade the "gatekeepers" to provide them with the physical change that would bring into alignment the trans person's assigned sex and felt gender. Much of the book is devoted to dissection of feminist hostility and prejudice--including outright proscription from some women's gatherings--and she carefully refutes each and every slur directed at trans people. I'm impressed with her documentation and logical clarity...a crucial component that makes this book an outstanding work. A very important idea in this book is that not only women, but *femininity* is devalued by our society--and not just by c

The Most Brilliant Feminist and Transsexual Analysis I've Ever Read

Published by Thriftbooks.com User , 14 years ago
"Whipping Girl" is not a light, airy autobiography, so if that's what you're looking for, go elsewhere- there are many wonderful ones. Rather, Julia Serano dives headfirst into some deep issues and instead of repeating the same old tired mantras, proposes new theories and different interpretations. I found myself reading with my highlighter out because I was consistenly blown away by some of the arguments and insightful comments Serano made. Her very background makes her the perfect analyst: as a biologist, she has the foremost knowledge on scientific reasons for transsexuality and related subject matter, as a transsexual woman she has an intimate knowledge of the effects of both testosterone and estrogen, and of how society treats men and women. Feminists, students of gender, or just the average lay person could all benefit greatly from this book, in my opinion. The reading can sometimes be a little dense- while much more readable than most, it still is primarily an academic text. And sometimes Serano can come off a bit cold and distant- not angry (or when she is, I believe it to be justified), but not exactly a warm and cozy narrator that draws teh reader in. Still, to me, that's a small price to pay. All in all, it's something you have to read. But I thoroughly anticipate that this book will be revolutionary- a new, fresh perspective on feminism, transsexuality, and the queer movement. Read it!

A breakthrough in feminist thought

Published by Thriftbooks.com User , 14 years ago
Julia Serano has managed to give voice to many thoughts I've had over the last five years since my transition from male to female, and has sewn them together into a lucid and compelling explanation of how things got so screwed up for us transsexual women. Her approachable, easy-to-follow writing style serves as an effective foil for her brilliant exposition. I feel positively empowered by her writing. We are the women who give up male privilege for femininity. Serano shows how much this fact threatens the patriarchy, and how transition treatment standards (set largely by men) have tended to objectify and pathologize us. If you believe the psychiatrists who say we transition just to wear pantyhose, you should buy this book to read the real reason. If you feel it is just that transsexual women are excluded from such venues as the Michigan Womyn's Music Festival, you should buy this book for a convincing explanation of why such policies are flawed from the feminist point of view. If your thinking has been formed by the feminists who've vilified us over the years, none of whom was transsexual, you owe it to yourself to buy this book to hear our side of the story. And, if you are a transsexual feminist like me, not only will you buy this book, you'll be elated that we finally have our own manifesto.

Quite possibly, the most important book on gender, sexism, transsexuality I've ever read

Published by Thriftbooks.com User , 14 years ago
I found myself so immersed in this book it only took my two days to finish it. I couldn't possibly emphasize enough how important it is for anyone who considers themselves transgendered, a feminist, or a trans-activist to read this book. She put down on paper all the issues I've had with prior works on these subjects and then some.

A breath of fresh air among stale gender studies!

Published by Thriftbooks.com User , 14 years ago
This book is amazing. Serano's analysis of sexism, misogyny, feminism, and queer politics are informed by her experiences as a trans woman, but bring important insight to anyone's experience with gender. This was the first thing I've read in years in the gender studies field that didn't feel stale.
Copyright © 2020 Thriftbooks.com Terms of Use | Privacy Policy | Do Not Sell My Personal Information | Accessibility Statement
ThriftBooks® and the ThriftBooks® logo are registered trademarks of Thrift Books Global, LLC