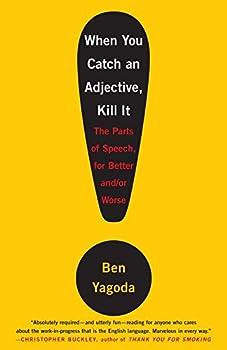 When You Catch an Adjective, Kill It: The Parts of Speech, for Better and/or Worse

This description may be from another edition of this product. What do you get when you mix nine parts of speech, one great writer, and generous dashes of insight, humor, and irreverence? One phenomenally entertaining language book . In his waggish yet...

Published by Thriftbooks.com User , 12 years ago
Anyone who likes words will enjoy this fun-to-read book about parts of speech and more. There are interesting stories and histories as well as thoughtful explanations. This would be a great gift for any word lover on your gift list.

Parts of speech? Horrors! But clear and applicable in this book

Published by Thriftbooks.com User , 14 years ago
I bought this book because I am ninety years old and had never been taught the parts of speech--and obviously did not have much time left if I were to learn them! This is far better written and presented than anything I have looked at before. I not only finished it it will stay with my dicionary at my side. Bill Weifenbach

The Parts of Speech Can Be Fun

Published by Thriftbooks.com User , 14 years ago
Among writers of English, there is a strong interest in their own language, and a long tradition of manuals by writers who suggest how to use English without error. Ambrose Bierce wrote such a manual, and writers constantly refer (but not necessarily defer) to Fowler, and many can quote Strunk and White from memory. For some reason, contemporary writers on the subject of English are called "language mavens", and they are of two camps, the prescriptivists who would like to tell you how to say something properly according to the rules, and the descriptivists who document how the language is being (rather than should be) used. As usual, there are extremists at both ends of the spectrum, and it would be wise to stick to the middle. That does not mean staying bland. In _When You Catch an Adjective, Kill It: The Parts of Speech, for Better and/or Worse_ (Basic Books), Ben Yagoda is happy to enjoy creative use of English that breaks rules. We would all be poorer without, for instance, Fats Waller's "One never knows, do one?" But he is also happy to emphasize (and, one assumes since he is an English teacher, enforce) the rules that work to promote clarity and understanding. His book isn't really a rulebook, but a survey in nine chapters of nine parts of speech, each a useful essay on usage. "Ultimately, the issue of correctness just isn't very interesting," Yagoda writes. What is interesting are "words, phrases, and sentences that transcend their meaning - because they're smart, funny, well-crafted, pungent, unexpected, or sometimes wrong in just the right way." There are lots and lots of examples of such lively, perhaps grammatically questionable, usage in all the chapters here. The title of the book, about killing adjectives, is advice generally attributed to Mark Twain, who knew that using the right noun would preclude unnecessary adjectives. But adverbs get even less respect. Elmore Leonard wrote, "I have a character in one of my books tell how she used to write historical romances 'full of rape and adverbs.'" Stephen King wrote, "I believe the road to hell is paved with adverbs." Yagoda says that two adverbs need special mention, and in so doing, demonstrates the subjective nature of judging usage. He doesn't like "arguably" as in, "He is arguably the best quarterback in the NFL", because it probably doesn't mean that anyone has taken this stance in an argument, but that the writer is withholding an opinion and standing behind a bogus adverb. But it is a surprise that he likes "like", as in "It's a complete obstruction of, like, freedom" because it makes the speaker seem less pompous (to be sure, this was a spoken, not a written example). Yagoda dishes out such likes and dislikes in every chapter, with some being idiosyncratic and some conventional but for idiosyncratic reasons. For instance, in a section on sentence adverbs (one adverb to modify a whole sentence, as in "Frankly, my dear, I don't give a damn"), he says that the

Published by Thriftbooks.com User , 14 years ago
Just what is it about the adjective that inspires such violent tendencies in otherwise peaceful people? As Ben Yagoda writes, "They (adjectives) rank right up there with ... the customer-service policies of cable TV companies." And the reason for this animosity is that adjectives are often used by lazy writers, "who don't stop to think that the concept is already in the noun." Those of you who love words will appreciate the glossary of unusual adjectives. Words such as lambent, nugatory and piacular definitely deserve to be let out more often! It's not just adjectives that are examined in entertaining detail - every part of speech is covered. F'r instance how much do you know about definite and indefinite articles? One of the things I've noticed when I edit work for people whose second language is English is that they have real problems using articles, and now I understand why this is so. As Ben explains, "... by the age of four, native English speakers know in their bones the difference between 'I drank Coke,' 'I drank the Coke,' and 'I drank a Coke,' and the fact that you take a pass but the easy way out." Can you imagine trying to learn these differences as an adult? It seems the problem is compounded (or alleviated) depending on the learner's native language. "Romanian, Macedonian, Swedish, and Aztec append the definite article to the back of a noun, and Arabic to the front ... Swahili and Latin rarely use articles of any kind. ... Polish, Russian, and Japanese are article-less as well. Arabic, Welsh, and Esperanto have definite articles but no indefinite articles. In French and German, the definite article is applied to proper nouns and the names of abstractions and classes of things ..." Aargh! Which brings us neatly to interjections ... And so the book is filled with such interesting details about language that you'll find yourself carrying it from room to room as you go about your chores, loath to put it down ... Or is that only me?

Published by Thriftbooks.com User , 14 years ago
This is a wonderful book for writers and readers alike. By turns edifying and hilarious, it's filled with all kinds of useful and quirky information. Who thought a book about the parts of speech would be so hard to put down? Edifying, engaging, and just plain fun to read.
Copyright © 2020 Thriftbooks.com Terms of Use | Privacy Policy | Do Not Sell My Personal Information | Accessibility Statement
ThriftBooks® and the ThriftBooks® logo are registered trademarks of Thrift Books Global, LLC