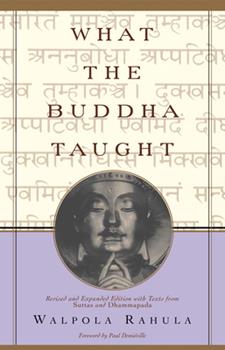 What the Buddha Taught: Revised and Expanded Edition with Texts from Suttas and Dhammapada

This comprehensive, compact, lucid, and faithful account of the Buddha's teachings persistently enjoys great popularity in colleges, universities, and theological schools both here and abroad. "An exposition of Buddhism conceived in a resolutely modern spirit."--from the Foreword. "For years," says the Journal of the Buddhist Society, "the newcomer to Buddhism has lacked a simple and reliable introduction to the complexities of the subject. Dr. Rahula's...

This is a free book

Published by Roi , 2 years ago
You can get it at some temples, that’s where I got mine from a monk. It was never intended for resale but if you don’t live near one, or are timid of visiting one.. then by all means it’s with the price offered here.

Published by Thriftbooks.com User , 17 years ago
I've been studying the Dhamma for over a quarter century, and have been fortunate in having a number of wonderful teachers. In my opinion, Rahula's book is the best introduction available. The book is also quite useful as it is the ultimate "briefer course" on the subject. Extremely well-ordered and organized, the book presents all the basic concepts and tenents of Buddhism, in concise and easily accessible explanations. Noteworthy is Rahula's blessed blend of economy and comprehensiveness. In less than 150 pages, an average reader can be well-versed in this magnificent teaching as it was originally disemminated. The entire book can be read in a couple of sittings (great for students under pressure, reads like higher order cliff notes!). Rahula, a Theravadan Monk, begins his discussion by relating the life of the Buddha (the dhamma) and continues with an exposition of "The Buddhist Attitude of Mind". Here he discusses with brevity and precision the purpose and essence of the Buddha's thought and enlightenment. In the following four chapters he discusses the details of that enlightenment, "The Four Noble Truths", which is simultaneuosly a map of "The Middle Way", the path the Buddha has prescribed to reach freedom (nibbana, which is Pali for the Sanskrit, nirvana). The next chapter deals with the most difficult concept for Western students, Anatta (the idea of 'no-soul'). In this chapter, there is also a clear and understandable discussion of 'paticcasamupada' which is often called in older English translations 'dependent-arising' or 'co-dependent arising'. This idea is the Buddha's theory of causation and is the central philosophical concept in Buddhism. Rahula translates it as 'conditioned genesis', but much more to the point is the contemporary Vietnamese Buddhist Thich Nhat Hanh's translation of the idea as 'Interbeing'. However, in brevity, focus, and comprehensiveness, Rahula's explanation is most helpful. Following are chapters on meditation, mindfulness, and the potential helpfulness of Buddha's teaching for the contemporary world.Then, we get forty pages of selections from the most essential Buddhist texts, including Buddha's first talk after attaining enlightenment, the wonderful Dhammapada, the Metta-sutta, and much else. The book includes a comprehensive and informative glossary of Pali (the scriptural language of Buddhism in contrast to Sanskrit which is Vedic/Hindu)words, excellent Bibliography, and complete Index. The Theravadan teaching is the original teaching of Buddhism as close as the world's scholars and devotees can seem to get to how Gotama Buddha taught it. You simply cannot do better that this book for quickly attaining a foundational knowledge of Buddhism.

Still one of the best introductory books on Buddhism

Published by Thriftbooks.com User , 21 years ago
This is a clear and concise introduction to the central teachings of Buddhism--the Four Noble Truths, the Eightfold Path, no-self (which Rahula calls "no-soul"), and meditation--by a monk and scholar from the Theravada Buddhist tradition. It includes translations of selected Buddhist texts and a glossary of Buddhist vocabulary. When I first read "What the Buddha Taught" in college, it helped spark my interest in Buddhist practice, and one bit in particular has fundamentally shaped my approach to life and religion (Christianity as well as Buddhism): the story of the man wounded by a poisoned arrow, a parable illustrating the Buddha's utter noninterest in metaphysical speculation and his pragmatic and compassionate focus on liberation from suffering. I'd also recommend "Awakening the Buddha Within," an introduction to Buddhist teachings by Lama Surya Das, an American teacher of Tibetan Buddhism. (If you're looking for a "how to" book on meditation, I'd recommend "The Three Pillars of Zen.")

Published by Thriftbooks.com User , 21 years ago
The Ven. Dr. Walpola Sri Rahula has produced one of the best texts I have ever read on Buddhism! There are many out there that incorrectly talk about Buddhism and they also have many incorrect interpretations of the Buddha.Venerable Rahula does an outstanding job in his correct translations/interpetations of important teachings of Siddhattha.The reader is introduced to key Buddhist teachings such as:-The Buddhist attitude of Mind-The Four Noble Truths (each one having it's own chapter!) And the eightfold path as well as the five aggregates.-The doctrine of No-Soul: Anatta. This is one of the most important ones and the author talks about how 'self' is incorrectly being introduced by some authors, etc.-Meditation: Everything from a few 'basic' meditation techniques to such things as why meditate...-What the Buddha Taught and the World Today: This great section shows how to apply the Buddhas teachings into every day life. There is even the 10 duties of a ruler (Government) which would be great if some politicians read!And finally there is 'selected texts' which provide even more insight...it was a refreshing thing to read after the chapters and after reading the book it made sense when reading these selected texts!There is even a Glossary to help you understand words used in Buddhism. In fact throughout the book you are introduced to the correct sayings and words...All in all you should get this book even if you are already 'into' Buddhism.

Read it in a day!

Published by Thriftbooks.com User , 22 years ago
Cycling through the books on Buddhism at the bookstore my eye cought "What the Buddha Tought" which its intrinsic appearance forced it down off the shelf and under my eyes. I've never read slower in my life yet finished in that bookstore that very day. Unlike other books on Buddhism the author used no filliers and personal observation to distract the reader. Instead, quality and the natural sence of Buddhism were abundant in his translations and examples, as if it were the Buddha teaching himself. I have never read a more direct and enriching book on Buddhism before where every page filled in the gaps of unanswered questions I had and leaving me with a sense of completion and a wanting to learn more. I can sure say that my life has been changed today.

The Bible on Buddhism

Published by Thriftbooks.com User , 23 years ago
I was a student at Oxford University, England and was given this informative book to read for my studies. I was born into Buddhism and had practiced, even intensely at times, the Mahaparinirvana Sutra. So I had good experience going into my class. This book answered and made clear many of the questions I had been pondering for many years. It is the definitive book on Buddhism. The Chair of the Buddhism department at Oxford, use to tell us that "What The Buddha Taught" by Walpola Rahula will change the way you think about life and Buddhism. It has. I encourage everyone to buy this jewel of a book. It is rare you find a book so masterfully written.
Copyright © 2022 Thriftbooks.com Terms of Use | Privacy Policy | Do Not Sell My Personal Information | Accessibility Statement
ThriftBooks® and the ThriftBooks® logo are registered trademarks of Thrift Books Global, LLC