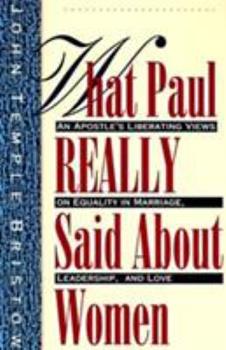 What Paul Really Said about Women: The Apostle's Liberating Views on Equality in Marriage, Leadership, and Love

A challenge to the traditional understanding of St. Paul's epistles and sexism in today's church.

What Paul really said about women

Published by Dr Shirley B Matthews , 2 years ago
A must book to get people always misinterpreted Paul writing he's not against women Jesus set that in order but society still want to keep imprisoned women surprises women is in agreement they believe this is submissive

Published by Thriftbooks.com User , 15 years ago
I admit, Paul was not a particular favorite of mine when I first read his words about women. I've believed in equality between the sexes for a long time now, but it was not until I came across this book that I discovered that Paul may actually have agreed with me on several important points. Bristow, God bless him, is a pastor who dared to look beyond the degrading shroud several churches still throw on women and seek the truth that contradicted all he had been taught. This book wonderfully presents not only Paul's words in their original meaning (before all the mistranslations) but examines several sexist viewpoints on women that have been around for a long time and are revealed to actually be contradictory of each other. I cannot thank Bristow enough for his wonderfully refreshing and freeing book, which offers knowledge and evidence about equality ordained by God and will challenge any who still insist on keeping women under men. There are, sadly, still such people around; one person who claimed this book is false recommended almost every garbage book encouraging female spiritual bondage that I can think of and said that "obey still means obey" and "submit still means submit". Sure, unless "obey" was used only in mistranslation and never really applied to women in the first place. Also, Christ talks about MUTUAL submission between the sexes, so the argument that it's only for women falls flat on its face even without this book. I recommend this treasure to everyone! If you have never known how to accept Christ's gift of freedom and equality, this book can help you. Oh, and Paul...my apologies :)

Paul is more liberal than the Feminist Movement

Published by Thriftbooks.com User , 21 years ago
One of the negative aspects of my culture, the Jesus Movement, was it's treatment of women. I took in these ideas, and looking through the scriptures, came to the only conclusion one could from the text in front of us: women should obey their husbands, and should not lead or teach over men. At least, coming from the background I do believing that one should follow the scriptures. I then joined up with InterVarsity at Occidental College, at the time, one of only two IV chapters in the US with it's staff headed by a woman. Now suddenly I had to deal with these issues- there really wasn't another option for a strong Christian group on our small campus. Was it OK for me to attend these services? What if I listened and didn't apply what the pastor said? Well, of course, much of what she said was good and helpful. Perhaps it was OK to listen, but it was not me sinning, but her? After all, God speaks through non-believers- how much more could he instruct me through a woman? I wanted to believe that women could teach and lead just as easily as men, at the same level as men; that they were more than just "spiritually equal"; that they didn't have to obey their husbands. It all sounded really nice. But unfortunately, it was not what the Bible said- and we can't simply follow truths we would like and ignore parts of the Bible we don't like. Then I came across this book. I have not personally had a conversion experience, having grown up in the church, coming to Christ more in a Markian manner than Johanian. But this book initiated my conversion experience, at least as in regards to issues of women. At the time, cultural arguments had little weight with me- after all, how could we have any degree of certainty as to what the original culture was like? Even if so, how could we know that the same issues in that original culture, and subsequent directives, did not also apply to us? Bristow lays out his argument looking at the original Greek, which was exactly what I needed to hear. And I think what a lot of other people in my situation need to hear. Sure, he also puts out cultural reasons as to why Paul said what he did, in different ways, to the churches in Corinth, Ephesus, et. al. But he also shows quite convincingly and clearly how in the original Greek Paul was actually arguing for something more liberal than the liberal feminist movement of today, but his words got radically misinterpreted through the misogynist eyes of the early Church Fathers. This is not to detract from those Fathers or impute to them some sort of overt attempt at distortion- they were people of their time, and read what they read through the lenses of everything they knew- they could not do otherwise. But Bristow shows how Paul was freed by the Holy Spirit to see something greater than that which he grew up with. The Feminist Movement comes up short- it argues only for freedom for women. A good thing, but a sadly pitiful thing in comparison to what could be. For Paul

Helped keep me from throwing my Bible away.....

Published by Thriftbooks.com User , 21 years ago
I spent many years in a destructive Bible Based Cult which suppressed women in a bad way. After leaving this cult and finding freedom in Christ, I still ran into this kind of belief system everywhere I turned. I saw the freedom in Christ in the scriptures, then there would be those "conflicting" ones like: "I suffer not a woman to teach nor usurp authority over the man." "A woman should be silent in the church" "A woman can be saved by childbearing????" I was ready to throw my Bible away because it these seeming inconsistancies did not add up to what I knew in my heart and spirit. But I believe God allowed me to find this book and others which helped me understand what Paul was really saying and the history that lay behind "WHY" he made these statements and how untterly twisted they had been made by religion. This is a must read for every woman and any men in her life who feel that women must be subservient to men.

Published by Thriftbooks.com User , 21 years ago
As an ordained minister I have seen much of the pain that both men and women suffer because of misunderstandings of Paul's writings in the New Testament. One question confronts all Christians: if the New Testament says that women are not to teach and are to remain silent in the church, then how can women be ordained or serve in positions of congregational authority? John Bristow's book explains with responsible scholarship and Christian integrity what Paul really said about this and many other gender issues-- not what Paul's letters interpreted through a Greek philosophical mindset were misconstrued to mean. This book will answer questions you have wondered about all your life.

Great read - have your Strongs handy!

Published by Thriftbooks.com User , 24 years ago
Being a couch scholar and a lay minister, I've often pondered the confusing words of Paul about women and their role in the family, the Church, and society. The night I purchased this book, I started into it with a healthy skepticism - after all, there is alot of "fluff" out there trying to redefine biblical principles to "tell them what their itching ears want to hear." After carefully going through the book, with my other hand flipping furiously through my Strongs concordance/lexicon, I was overjoyed to find that this book opened up Paul's heart in a completely new way to me. It enriched my faith, changed my personal views on women, and made me more prepared for future life as a husband. Definitely worth the $ if you, like me, get stuck every time Paul mentions submission, headship, and not talking in church. Study to show yourself approved...
Trustpilot
Copyright © 2022 Thriftbooks.com Terms of Use | Privacy Policy | Do Not Sell My Personal Information | Accessibility Statement
ThriftBooks® and the ThriftBooks® logo are registered trademarks of Thrift Books Global, LLC