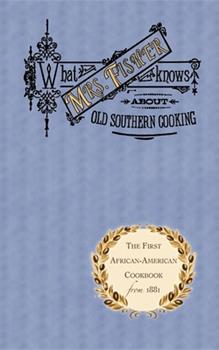 This is a wonderful collection of 160 authentic and tasty recipes of the Old South. Originally published in 1881, it was the first African-American cookbook. Prior to Applewood's edition, it had been reprinted only once in a limited edition of 100 copies. 93849

Not just a cookbook

Published by Thriftbooks.com User , 14 years ago
This is more than a cookbook (because most recipes you can't recreate), it is a historical account of life as a slave cook.

Interesting for the student of African-American Gastronomy

Published by Thriftbooks.com User , 20 years ago
"What Mrs. Fisher Knows" is a charming antique and should be read by anyone with an interest in African-American or Southern cookery, or anyone who would like to re-create authentic 19th century American cuisine. This reprint of "What Mrs. Fisher Knows" was brought into being by Karen Hess. Hess has provided an informative introduction to the recipes (which are reproduced in their entirety), explaining many 19th century cooking concepts which may be unfamiliar to the modern cook and providing as much of Abby Fisher's story as can be found. In Fisher's original text it is interesting to see some of the earliest known written recipes for several dishes and to discover others which are almost unknown today. Fisher's original recipes are typical of 19th century (and earlier) cookbooks. Each recipe is several sentences in a single paragraph, with no separate ingredient list. In many cases it is assumed that the cook will know how to prepare something that is taken as a given in the recipe. This is a cookbook from a time when all cooking was "from scratch", when there were few labor-saving kitchen gadgets, and printed books were luxury items. It is not a step-by-step cookbook. [For that, see Chef Paul Prudhomme or Southern Living.]"Good Things to Eat" by Rufus Estes is sometimes called the first cookbook written by an African-American. "What Mrs. Fisher Knows" was published thirty years earlier. (It could be said that Mrs. Fisher, a former slave, did not actually "write" the book as she evidently did not know how to write; she dictated the recipes to a member of the Women's Cooperative Printing Office in San Francisco which published the work in 1881.)(The editor, Karen Hess has done similar work on Mary Randolph's "The Virginia Housewife" and "Martha Washington's Booke of Cookery and Booke of Sweetmeats".)

Published by Thriftbooks.com User , 21 years ago
As soon as I learned of this book's existence, I ordered a copy for myself. I love cooking (and cookbooks), and I am also fascinated by the kind of first-person, anecdotal history that can be derived from the writings or records of ordinary people living long ago. This work--the first cookbook by an African-American, actually a former slave, originally published in 1881-- appeals to both of those interests, and, in addition, is a curious little conversation piece to display on a bookshelf. The recipes are not ones you will turn to each night when making dinner, but they are fun to experiment with, as long as you rewrite the directions first in their proper order (they are written in a stream-of-consciousness style), and as long as you read the historical notes that define the units of measure used in the recipes. This book could be a great guide for a "historical reinactment" of a Civil War era dinner, or, if not, then it is at least a selective culinary history of the Old South. Most interesting to me are the medicinal recipes, like blackberry syrup as a remedy for dysentery, and the recipe for "infant diet." This edition contains not only the original cookbook, but an informative afterword that explains some historical facts about Mrs. Fisher and the society around her. I would recommend this book to anyone interested in American history, African-American history, or the art of cooking.
Trustpilot
Copyright © 2022 Thriftbooks.com Terms of Use | Privacy Policy | Do Not Sell or Share My Personal Information | Accessibility Statement
ThriftBooks® and the ThriftBooks® logo are registered trademarks of Thrift Books Global, LLC