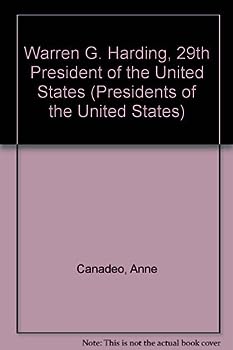 This description may be from another edition of this product. Presents the life of Warren G. Harding, including his childhood, education, employment, and political career.

Warren Harding, a man of significant, but not great accomplishments and a disaster as President

Published by Thriftbooks.com User , 12 years ago
It is a general consensus among historians that Warren G. Harding was one of the worst Presidents of the United States and some even rank him at the bottom. The Teapot Dome scandal was one of the worst examples of corruption ever to appear in the executive branch and Harding was largely clueless about it. Furthermore, one of his cabinet officials that was not corrupt openly engaged in illegal activities as he went about trying to limit the power of organized labor. Which was odd, because Harding was generally in favor of labor and management working amicably to resolve their differences and he was sometimes as critical of management as he was of labor. Harding's life was one of significant, but not great accomplishments; even to the point where he mocked himself for the amount of time he spent "bloviating", his word for idleness and daydreaming. Harding's record as a legislator was mediocre and he was always known as a conciliator and "harmonizer" rather than a partisan. He made friends from all positions on the political spectrum, which was the primary reason he was nominated for President and then easily elected. While his tenure as President was cut short due to his death in 1923, there is no reason to believe that things would have been much different had he lived. Some officials of his administration committed suicide rather than face the charges that were coming, a strong measure of their severity. In this book, Canadeo captures the essence of the Harding personality, conciliatory, non-partisan and someone that you would want to have over to your house for drinks and a card game. Unfortunately, in the case of Harding, those skills proved to be different from what a President needs to govern and that point is also made very clear in this book.
Copyright © 2020 Thriftbooks.com Terms of Use | Privacy Policy | Do Not Sell My Personal Information | Accessibility Statement
ThriftBooks® and the ThriftBooks® logo are registered trademarks of Thrift Books Global, LLC