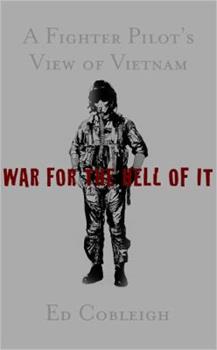 War For the Hell of It: A Fighter Pilot's View of Vietnam

War-from 25,000 feet up. During the Vietnam War, Ed Cobleigh served two tours of duty, logging 375 combat sorties and over 1,000 hours of combat time in the F-4D Phantom II fighter/bomber. Unlike so many others, he made it back in one piece. And he returned with an experience-and a perspective-that those of us on the ground could not begin to understand. In War for the Hell of It, Cobleigh shares that perspective in an intimate account of his life...

What the Captain means is...

Published by Thriftbooks.com User , 16 years ago
Combat memoirs get written years after the events. During that time the bad gets erased in memory and the glory gets accentuated. It's way too easy to forget the puking at the back of the revetment and remember the John Wayne swagger that you never really had at the time. Heroism comes so easy in retrospect and from the safety of a position in front of a word processor screen that it is rare to really read honest admissions of the things that went bump and bang in those deadly nights. Ed Cobleigh (another Fast Eddie)tells about the war as it was in an assault on all of the senses. Sights, sounds, smells and feels come at you from all of the unusual places of a combat environment with a skill that few aviation writers have brought to the table before. I've been disappointed in way too many fighter pilot memoirs that turned out to be self-aggrandizment coated in public relations hogwash. This book is different. It's real. It's visceral. It's the way it was and the way I remember it as well. It wasn't a good war, but it was the only one we had and Ed Cobleigh went and did what was asked of him and hundreds like him. He shows very clearly what was good and what was bad about the conflict. This is must reading if one is ever going to hope to get a glimpse of the madness of that war. And, it ain't fiction.

Published by Thriftbooks.com User , 17 years ago
This is one of those rare books that you hope to stumble upon when searching around the history and military sections. It is a highly enjoyable read that is very well written. If you are interested in learning about the personal experiences and viewpoints of a veteran USAF pilot who logged over 1000 combat hours during the Vietnam War, then look no further than War For The Hell of It.

Putting Men in the Machines

Published by Thriftbooks.com User , 17 years ago
Vietnam-era combat pilots are too often overlooked. Their bombing campaign was one of our nation's costliest air offensives. Yet, for most Americans, it's the "grunts" on the ground who remain the face of U.S. military involvement in Southeast Asia. Perhaps that's because so many Vietnam aviation narratives concentrate on technical details at the expense of human experience. In "War for the Hell of It," Ed Cobleigh has given us an arresting emotional account of one pilot's personal war. Forget "The Right Stuff." Cobleigh pierces that popular image and takes us inside the helmet of a USAF fighter pilot, circa 1969. His memoir is much more than airspeed and avionics, operations and ordnance. This is a book about warriors; the author just happens to fight his war from the cockpit of an F-4 Phantom II fighter-bomber. Cobleigh's account is unsentimental and unsparing. He's a relentless veteran, cold and competent. Over two tours and 375 combat missions he makes mistakes, he hates the enemy, he loses friends, and he copes by resorting to denial and detachment. Yet, for all his hard-won cynicism, Cobleigh refuses to surrender his humanity. This is a book about duty. Winners get out alive, and survivors are obligated to tell the truth. One reason why Cobleigh's memoir is so compelling is because it's not a straight chronology. Readers who expect dates and specifications will be disappointed. Instead, Cobleigh wisely chooses to tell his story as a series of vignettes that capture vivid on-the-spot impressions. It so happens that the father of one of my high-school classmates served with the USAF in Vietnam. Navigator in a Phantom, he won the Distinguished Flying Cross. When he told us war stories, this is what they sounded like. "War for the Hell of It" resonates with noted Vietnam memoirs like Michael Herr's "Dispatches" and Philip Caputo's "A Rumor of War." If you enjoy this book, you might read Ed Rasimus's "When Thunder Rolled," another fine USAF memoir that covers the same period. It's past time that these men told their stories. We're fortunate that articulate writers like Cobleigh and Rasimus have decided to share theirs.

Almost worth getting fired over

Published by Thriftbooks.com User , 17 years ago
One morning I found myself with a couple hours to kill between my dental appointment and my haircut appointment. So I swang by the bookstore and decided to browse. "War For the Hell of It" caught my eye and, having yet to spend any of my paycheck from the week before, I decided to grab it. Unable to read it before work that evening, I stuck it in my pocket for reading during my breaks. Boy, was that a mistake. Throughout the week I was sorely tempted to plop myself behind my register and read that book. Completely engrossing and, unlike most fighter pilot memoirs ("I was a complete walking hormone who could just wink my eye and bed any woman I wanted, I shot down seventeen MiGs in one afternoon and singlehandedly won the war..."), I found myself relating to the author. The fact that the book was wonderfully well-written helped immensely as well. Thankfully, I was blessed with a modicum of self-control, as reading this book while working would certainly have gotten me fired - my employers do not look kindly upon what they call "time theft." Sure, there may be nothing to do but it's important that one LOOK BUSY. So thank you, Mr. Cobleigh, for adding a great book to my bookshelf that will likely fall apart from extensive use. Oh, and did you notice that the cover art is of a Naval aviator? You can tell from some of the equipment. Got a good chuckle from that.
Trustpilot
Copyright © 2022 Thriftbooks.com Terms of Use | Privacy Policy | Do Not Sell My Personal Information | Cookie Preferences | Accessibility Statement
ThriftBooks® and the ThriftBooks® logo are registered trademarks of Thrift Books Global, LLC