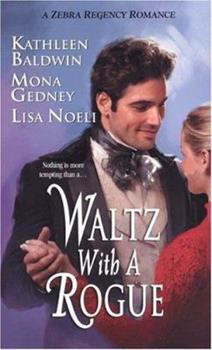 The ballroom is the perfect setting for romance, as seductively handsome rogues dance away with women's hearts in this delightful trio of Regency novellas. Original.

Waltz With A Rogue is Charming!

Published by Thriftbooks.com User , 16 years ago
Since I travel a great deal, it's important to always have something to read. Novellas meet my need for a quick visit to the written word. Waltz with a Rogue has three stories. The Highwayman Came Waltzing by Kathleen Baldwin, The Rebel and the Rogue by Mona Gedney and Dance With Me by Lisa Noeli. The Highwayman Came Waltzing by Kathleen Baldwin is a humorous and enjoyable visit to the world of thieves. But these thieves are not what you would expect. When Elizabeth Claegburn discovers that her former love, Lord Ryerton, is investigating a series of village robberies, she has no idea that a dance with him will rekindle their love. But loving him is not possible, for she has a dangerous secret. The Rebel and the Rogue, by Mona Gedney is classic clever woman. To avoid being married off to a man she doesn't want, Vivian Woodruff asks Anthony Mallory to marry her. She doesn't intend to stay married to him, but that was before the kiss. Dance with Me by Lisa Noeli is the charming story of a dancing master who is not a dancing master. Neville Dunsleigh is really looking for a bride. But the object of his attention is dodging his advances. Is Penelope Spencer really who she claims to be? Each of these stories is well-written and pleasurable romp through the regency period. I think you'll enjoy Waltz with a Rogue.

Published by Thriftbooks.com User , 16 years ago
The Highwayman Came Waltzing by Kathleen Baldwin Elizabeth "Lizzy" Claegburn learns that her childhood sweetheart, Lord Ryerton "Trace", has finally come home. Problem is that he will be investigating the string of robberies in the village. Since the French Highwayman is giving money to village families in need, no one is talking. Lizzy knows the identity of the thief. But no matter how much she still cares for Trace, she dares not tell him the truth. The Rebel And The Rogue by Mona Gedney With her stepfather determined to marry her - and her fortune - to his youngest brother, Vivian Woodruff is in dire need of escaping. She decides to temporarily marry the infamous rogue, Anthony Mallory ... even if she has to blackmail him into it. Dance With Me by Lisa Noeli Neville Dunsleigh is searching for the perfect bride. If the London ladies found out who he really was, they would be lining up for his inspection. But he wants a wife who he can love and who shares his love of dancing. So Neville passes himself off as a dancing master. What better way to meet the available London ladies undetected? Then he meets lovely Penelope Spencer. As attracted as Neville is, he notices her skittish actions and wonders if Penelope is really who she claims to be. **** All three stories are great and worth reading. The last tale is not as good as the first two, in my opinion, but is still worth your time. Each story is filled with romance and I found that time flew by at warp speed as I read. **** Reviewed by Detra Fitch of Huntress Reviews.
Copyright © 2022 Thriftbooks.com Terms of Use | Privacy Policy | Do Not Sell My Personal Information | Accessibility Statement
ThriftBooks® and the ThriftBooks® logo are registered trademarks of Thrift Books Global, LLC