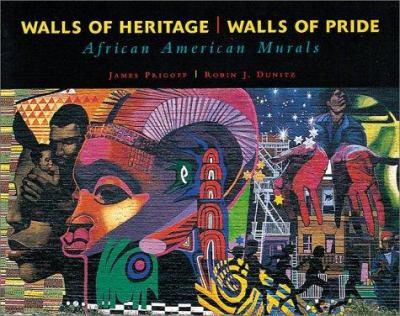 THIRTEEN COLONIES & THE LOST COLONY(tm) Take a step back and discover the thirteen colonies of Colonial America. From European exploration through the American Revolution, witness the unique history and character of each colony. Trace the role of each colony in the American Revolution and that colony's impact on the formation of our Constitution. Georgia - Using primary source documents that include the Charter of Georgia, a map of the colony circa...

Published by Thriftbooks.com User , 22 years ago
This lavish display of Afro-American wall murals gathers three decades of murals by the nation's leading artists, presenting these urban wall paintings under one cover for the first time. Over 200 paintings explore the works, history and themes of Afro-American urban wall paintings and focuses on thirty years of mural art from 1967 to modern times. Outstanding.

Published by Thriftbooks.com User , 22 years ago
This is a treasure. It combines first-rate photography and exemplary scholarship with the splendid production values of a publisher reknowned for sumptuous printing. It is a work that recovers and preserves a rich, scattered and often perishable art. It should inspire young artists to new efforts."Walls" reaffirms the power, beauty and humanity of public art-- art in libraries, schools and along neighborhood streets, art readily accessible to people as they go about their daily life. It proclaims the values of their work, their community-involvement and traditions."Walls" demonstrates that Afro-Americans have their own independent tradition of mural art that emerged at the same time as but separate from the modern Mexican tradition. Although later it sometimes was influenced by Diego Rivera and his colleagues, it arose during the Harlem Renaissance of the 1920s inspired by African sources. The creativity of Black murals is also noteworthy for providing continuity between the New Deal murals of the 1930s and the community-based art since the 1960s. When art on social themes was driven from public walls during the witch-hunts of the '50s, Black murals were being painted in Black colleges across the South, and the artists who gained experience here initiated the mural movement of the '60s when Black neighborhoods organized against racism. These Black artists and their untrained community assistants thereby created a movement that professional painters and local people of all races joined which continues to this day.The horizontal format of "Walls" is especially fortunate in doing justice to paintings that have a like layout. The introductory essays by reknowned African-American art historians, the comments of the artists themselves alongside their works, their biographies at the end and a list of murals throughout the country enhance the value of this volume."Walls" is a major resource of US history and art and as strong proof that there is of the contribution of African-Americans to our shared culture.

A Book for Current and Future Enjoyment

Published by Thriftbooks.com User , 22 years ago
"Walls of Heritage / Walls of Pride," which I first browsed, then read, reread, and loved, has greatly added to my understanding of the background and context of African-American murals. The essays, the time chart, and the comments by the artists on their own works, in addition to the beauty of the paintings and the presentation, have added to my enthusiasm for and appreciation of this vibrant art formIn the past I have enjoyed visiting sites of public art. I now intend to carry this book with me as I travel, along with my maps and travel books, and when possible visit the murals shown in "Walls" seeing to what extent I believe the artist accomplished his goals.I urge that you do the same, and you may come to find that your best travel time is spent outdoors viewing painted walls. And sometimes indoor walls and canvasses.And later the book will be an impressive and useful addition to your library.
Trustpilot
Copyright © 2022 Thriftbooks.com Terms of Use | Privacy Policy | Do Not Sell My Personal Information | Cookie Preferences | Accessibility Statement
ThriftBooks® and the ThriftBooks® logo are registered trademarks of Thrift Books Global, LLC