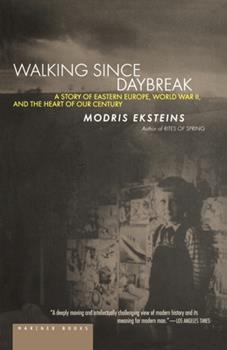 Walking Since Daybreak: A Story of Eastern Europe, World War II, and the Heart of Our Century

Part history, part autobiography, Eksteins relates the tragic story of the Baltic nations before, during, and after World War II through personal stories from his family. Photos and map.

Published by Thriftbooks.com User , 16 years ago
Modris Eksteins is a professor at the University of Toronto at Scarborough, who has won prizes for his insightful 'Rites of Spring: The Great War and the Birth of the Modern Age' and for the present book. This one is an account of his family's life, beginning with his maternal great grandmother in Latvia. (Modris was born there in 1943). He moves the story sequentially to the postwar period with the Eksteins in England and Canada. At the same time he writes a history of the 'borderlands' in the Baltic, caught between Germany and Russia. He does this by writing a few pages of one or the other histories and then making a flash forward or backward to the other story. It works, because of the inherent interest of the two accounts and to his very fine prose. A profound historian, he writes with a sense of the insoluable and the unimaginable. As he cites one diarist, Mathilde Wolff-Moechenberg, "'What is the point of it all, what rhyme or reason was there for this desperate, ruinous destruction?'"(p.213). Especially ruinous in the borderlands. As the two empires waxed and waned, Germans shot socialists and the Russian NKVD shot 'class enemies.' Back and forth. Germans killed Jews and Latvians preceeded them when they saw open season ahead, and were murderous, if not as systematic as the Germans or NKVD. The Eksteins simply wanted out, and did eventually make it to Berlin, there to suffer allied bombing. Modris has no truck with allied bombing of civilians, though he shows no favor to the SS or the Wehrmacht. He does show irritation with the Swedes, who in order to keep their 'cherished neutrality'(p.1920) were reluctant to admit Displaced Persons, which would have displeased the Russians, who would have sent the DPs to the Gulag or shot them outright. But his account is balanced. The war was fought and won in the East. The USSR lost approximately 27 million persons in the 'Great Patriotic War.' Hitler in 1941-1943 assaulted Russia with 200 divisions, leaving just 4 to hold off the British and Americans. "The war in the West for those three years was a skirmish by comparison." (pp. 139-140). So what is to be drawn from the Second World War? That the Enlightenment was 'gravely wounded'.p. 220) That Western liberal categories cannot cope with such horror. We need to know that. .

Published by Thriftbooks.com User , 19 years ago
The greatest "unreported" story of World War II was the massive geographical dislocation of millions of Eastern Europeans in the wake of the Soviet-German conflict. There has been little historiography on the subject available to a general readership in English. Modris Eksteins' account of his family's flight from Latvia to uncertain sanctuary in Canada is a splendid, heart-rending sign that should encourage more popular history accounts of this terrible tragedy.The destruction of the German Sixth Army at Stalingrad in early 1943 and the subsequent loss of men and armor at Kursk later that summer paved the way for the Red Army to retake all of the territory lost to the Germans since June, 1941, and to storm its way through Eastern Europe to overwhelm the Nazi regime at its source in the Fuehrerbunker in Berlin. Millions of ethnic Germans, Balts, Poles and other civilian populations suffered terribly as the front lines drew back into their home territories. The Russians allowed their soldiers free reign to terrorize these civilians. Rape, theft and murder were inevitable companions that trailed in the wake of the Red Army's passage through Eastern Europe. Millions of civilians fled their homes in the dead of winter in 1944-45 to escape the dread Communist whirlwind.Modris Eksteins wasn't old enough in 1945 to remember his family's flight from Latvia, but his talents as a historian and writer have reconstructed those terrible days intact. Eksteins uses the memories of his mother and older sister, as well as his father's diaries and official records in countries involved in the Soviet-German conflict, to piece together the history of one family's flight into diaspora. Even those lucky enough to find their way into Displaced Persons (DPs) camps in western Germany faced long waits for admission to countries that would take them. Eksteins vividly conveys the plight of DPs, an unwanted reminder to Germans of their own complicity in the worst crimes in human history and a barely-tolerated marginal presence in a postwar Canada still so Anglicized that foreigners were automatically scorned and suspect.Gunther Grass has published a novel dealing with the East Prussian diaspora, a work that has opened up a tremendous flood of remembrance and pain in Germany. Until Grass's novel is translated and released in English, Modris Eksteins holds center court on the emotional tragedy that mass dislocation inflicted on its sufferers. It is time the voices of these people were heard.

Published by Thriftbooks.com User , 20 years ago
"The girl with the flaxen hair. Beautiful she was, everyone said. Temperamental and strong-willed, too. And in the next breath they mentioned her hair, long and blond. Everyone noticed her hair."- Walking Since Daybreak Perhaps one can imagine what life was like during World War II. Perhaps one can imagine the horrors faced by many people during this time. But is imagining really good enough? Can one really know what happened during these times? One of the better ways to do this is to read Walking Since Daybreak by Modris Eksteins. Walking Since Daybreak gives the reader a clear, and accurate picture of the trials that men, women, and children that lived in the Baltic regions faced. It tells of Latvia's history, how Latvia came under Russian control, how it broke free from communism, how it became the country it is today. It also tells the story of one man, and the author of the book, Modris Eksteins, and his family. How his family escaped from Latvia, and how they managed to get to Canada is a very profound and deeply intriguing tale. Perhaps the best example of the human's violent attitude toward other humans is World War II. Its immense cataclysm has no precedent in human history: 28 million Russians perished, 10 million Germans, six million Jews, and several hundred thousand English, French, Americans, and Canadians. During the war, Latvia, Lithuania, and Estonia - all Baltic republics - were devastated - however, many of those who braved the voyage across Europe were rewarded with entrance into Canada and the United States, where they still continue to live today."Buttons. A handful of them. The small suitcase, when it was returned in May 1941, contained his pullover, boots, and those buttons."- Walking Since Daybreak They are the buttons of Arturs Vajeiks, one of Eksteins' relatives. Before his family received the suitcase, they had hopes that he had been deported, to the Russian Tundra. "The prison had been so warm, they [Arturs' family] told themselves, that he hadn't needed his pullover or boots. But the buttons betrayed the hope."- Walking Since Daybreak For a long time, Arturs Vajeiks wasn't even an official statistic. His family did not know where his body lay. When he was taken away on February 19, 1941, he didn't die - he disappeared. On that day, Arturs was planning to take a load of timber to the mill, for cutting. Members of the railroad police, an auxiliary force, came for him. The charges against him were that he had "belonged to a counterrevolutionary organization, and stashed weapons illegally." The weapons charge was the most serious."When Latvia regained its independence in 1991, a goddaughter of Arturs discovered some information: On February 11, 1942, almost a year after his arrest, he had been found guilty under the criminal statutes of the Soviet Union and sentenced to death." - Walking Since Daybreak Unfortunately, this happened often during the war, and after it. A family member would simply disappear without a trac

Published by Thriftbooks.com User , 22 years ago
I am most pleased to have chanced upon this book, aptly titled "Walking since Daybreak: a story of Eastern Europe, World War II, and the heart of our century." I have known little of Latvia's history. Not only has Modris Eksteins done a masterful job situating the Balts in modern Europe, but he has stated well the pathetic question, "Why did humans behave so badly?" Is this wild slaughter the heart of our century? Rather than give a didactic analysis of rampant evil, he shows people as they suffer, cope, and provide for others. The author relates German influence in the Baltic region over centuries, the history of his family there from 1900 to 1944, and life as displaced persons in Germany from 1945 to 1949. Attitudes against DP's are appalling. This book is an easy, rewarding read despite its ponderous topic. The author skillfully changes point-of-view every few pages. This skipping back and forth in time, with movement between Winnipeg, Toronto, Lubeck, and Latvia, illuminates the topic, as it sometimes juxtaposes similar events, similar human attitudes. Thus, the bombing of German cities in part of the horror. The author shares his insights so gently and clearly that I consider this book a gift to me and other readers perplexed by the calamaties caused by people of our century. Maps help the reader.

Modris Eksteins and I have the same scars.

Published by Thriftbooks.com User , 22 years ago
Modris Eksteins and I have the same scars. I remember him as a little boy from the D.P. camp in Lubeck where his mother, Biruta, was my girl scout leader. His book focused and gave framework to the glimpses of horor and feelings of despair that are a large part of the memories of my childhood. It explains the cynicism and wariness that even as a young girl I had for the noble sounding rhetoric of war like "death with honor" and "national pride". Invaders and liberators are all the same. All wars are death, destruction and despair and sow the seeds for other wars to come. I now fully understand where my mother got the desperate courage to leave Latvia with two small children and only with what we could carry to go a strange land where she knew no one, barely spoke the language, and was not welcome. The book tells our story including the gallows humor that is the flimsy armor of those from whom everything has been taken.
Copyright © 2022 Thriftbooks.com Terms of Use | Privacy Policy | Do Not Sell My Personal Information | Accessibility Statement
ThriftBooks® and the ThriftBooks® logo are registered trademarks of Thrift Books Global, LLC