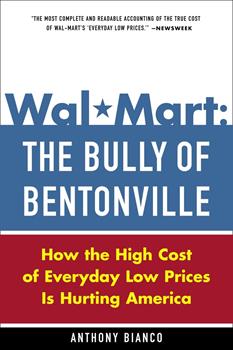 Wal-Mart: The Bully of Bentonville: How the High Cost of Everyday Low Prices Is Hurting America

The largest company in the world by far, Wal-Mart takes in revenues in excess of $280 billion, employs 1.4 million American workers, and controls a large share of the business done by almost every U.S. consumer-product company. More than 138 million shoppers visit one of its 5,300 stores each week. But Wal-Mart's "everyday low prices" come at a tremendous cost to workers, suppliers, competitors, and consumers. The Bully of Bentonville exposes the...

Published by Thriftbooks.com User , 11 years ago
Wal-Mart is a frightening concept just on a power scale. When you think of how much sway one chain can have over the economy and over law, people, and so amny other things - its scary. That's one of the things that this book points out and points out well. It takes time to show you how Wally World grew into the thiong that it is, asks you what yout hink about it, and then asks you what laws - if any - you see shattered in its wake. I personally like that because I personally find Wal-Mart interesting; I always wonder how anti-trust laws and monopoly standards never impact this beast. Really, what competes with it? The only thing I hold against this book is that it does preach a little as it goes along. It has a point that it wants to make and it opts to make it - regardless of just how it is going to make it. In some ways that bothers me because i do not like the chopping block approach - i think an argument can be made against Wal-Mart without lifting a fist and screaming to the heavens. Maybe that's me but, in a lot of ways, not doing something to level the playing field seems wrong. Did i like the book? Yes, I did. i liked it alot, enjoyed the read, and I learned. Some of the knowing was swayed and jaded, mind you, but that is the way of things. Besides, it is hard to defend the thing that showcases a smiley face on an advertisement and buries companies with the other side of its fist. There is a lot to be learned here, however, an one of the things is how much blame the consumer has to carry. The book points out many things, but this little piece of information, pointing toward that shattered look toward self, is interesting. It makes one wonder just how often Wal-Mart is cursed in towns but how little these towns look at the business and see how they built it up. A good read - jaded as it is.

Published by Thriftbooks.com User , 13 years ago
I did a rather intense research project on Wal-Mart during my senior year as a Political Science major a few years back and I read just about every Wal-Mart book out there! I saw documentaries and read transcripts, etc. It became a little close to being an obsession of mine. Not to discount the other books out there on the topic of Wal-Mart----there are so many great ones that specifically address sexism (Featherstone did an awesome one!!!) or impact on the community or overall effect on economics, etc----but this book is the best one to cover the topic of Wal-Mart. The reasons I name this as the first book when someone learns of my interest in the area are: 1) the book is really an easy read for anyone, you don't need to be a scholar, an activist, or even really interested in the subject matter to really get into this book 2) it's not preachy or condescending (so it's a great converter for those who think Wal-Mart is the best thing ever) but still gets a point across 3) it isn't just about Wal-Mart but it is about how we in America specifically shop----how our stores (grocery, department, etc) come to be and how they were in the past. When you read this you'll want to read more and these two are really great (though there is soooo much great stuff out there). Selling Women Short: The Landmark Battle for Worker's Rights at Wal-Mart Wal-Mart: A Field Guide to America's Largest Company and the World's Largest Employer

Everyone should read this book

Published by Thriftbooks.com User , 14 years ago
After reading this book I will never shop at Walmart again. I recommend this book to everyone who shops there and works there. It's a real eye opener...

Published by Thriftbooks.com User , 15 years ago
It is not often you find a book that looks at both sides of the coin for a given issue. Authors usually tend to take up one side of an argument and stick to it. In "The Bully of Bentonville" I expected it to mostly stick to how Wal-Mart has harmed the American economy more than it has hurt it and to focus in on the tactics they use to get things there way or no way at all. Therefore, I was surprised when I began reading this book to find out that the author does point out a lot of problems and questionable activities within the Wal-Mart empire, but he also devotes a great deal of time to also outline some of the things Wal-Mart has done right in his opinion as well as cover some of their more innovative ideas. Make no doubt about it, though, this book was written to shed light on some of the practices behind those "Everyday Low Prices". You will see how Wal-Mart treats their workers as a disposable resource, often forcing many of them to be on public assistance just to get by. You'll find out how Wal-Mart bullies around suppliers, often forcing good-paying American companies to have to move overseas just to meet the price that Wal-Mart will pay them. And you will also gain insight into how a company that some would say was run strict, but fair, under Sam Walton has become a bully that noone wants in their neighborhood anymore. A well rounded book that gives the reader food for thought. Even if you are a regular Wal-Mart shopper this book could provide a lot of insight and make you finally realize that you could very well be "shopping yourself out of a job" and not even know it.
Copyright © 2020 Thriftbooks.com Terms of Use | Privacy Policy | Do Not Sell My Personal Information | Accessibility Statement
ThriftBooks® and the ThriftBooks® logo are registered trademarks of Thrift Books Global, LLC