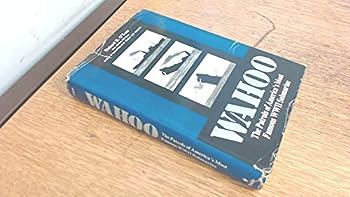 The career of the USS Wahoo in sinking Japanese ships in the farthest reaches of the Empire is legendary in submarine circles. Christened three months after Pearl Harbor, Wahoo was commanded by the... This description may be from another edition of this product.

Published by Thriftbooks.com User , 17 years ago
O'Kane fills this fantastic book with a great account of courage, leadership and seamanship. It is easy to get wrapped up in this as a "war book" since it goes to the top of the class. However, rather than repeat what other fine reviews have noted I would also expand the book to a classic on leadership. O'Kane is onboard with legendary Skipper Mush Morton. I run into a lot of people in business who complain about the challenge of motivating both their company personnel and their suppliers/customers. What greater motivational challenge than to take a group of young sailors on a 12,000 mile cruise, packed like sardines in a tube and surrounded by people attempting (far too often with success) kill you. His and his fellow officer's leadership kept the boat on the offense, with the crew believing in the mission and their fellow sailors. There's enough detail to get out a plotting board ( or at least arrange the cocktail almonds) to duplicate the seamanship involved in putting the submarine in the middle of enemy convoys on a dark night at the right place to fire at several targets. I have a strong feeling that in today's society we tend to confuse heroism with victims. True heroes are those who understand the risks they are taking and yet continue their mission despite the risks. For O'Kane and the crew it is a story of functioning as true heroes for months on end. UPDATE : This fall (2006) the Navy confirmed that the sunken submarine located recently in the Sea of Japan was in fact the Wahoo. After 50 years the final resting place of Morton and the crew has been located.

Published by Thriftbooks.com User , 18 years ago
Dick O'Kane served as U.S.S. Wahoo's executive officer during her first five war patrols, the first two under Marvin Kennedy, the next three under Dudley W. Morton (who, according to O'Kane, was never actually called "Mush" by anyone serving with him). O'Kane held the XO's post aboard Wahoo from the time she was built at Mare Island Navy Yard until he was promoted at the end of the Wahoo's fifth war patrol to take command of Tang, in which he would become the war's top-scoring American submarine commander. Morton and O'Kane formed a particularly tight command team in Wahoo, with Morton deliberately forgoing the CO's usual position at the periscope during attacks in favor of having O'Kane do the observations. Morton felt that, so long as he had a reliable officer at the periscope, he could better assure a successful attack by stepping back and concentrating on the overall tactical situation without having to worry about the purely mechanical aspects of bearings and ranges. It was a system that worked remarkably well. In 2003 I edited Wahoo's war patrol reports for publication. Those give the basic facts, but O'Kane's book adds the heart, and a lot of the day-to-day detail. For instance, it turns out that Morton did most of the sewing in Wahoo, and that O'Kane was a singularly lucky cribbage player. Since he was no longer aboard, O'Kane reconstructed the last two war patrols from the official report of the sixth, along with details supplied by some of the men who had what turned out to have the good fortune to leave Wahoo following that patrol. Wahoo's seventh and final war patrol, when she was lost with all hands, O'Kane reconstructed based on his personal knowledge of Morton's character and likely actions, along with Japanese reports of shipping losses and of an attack on a submarine in La Perouse Strait that could only have been Wahoo. His speculation about a faulty Mark-18 torpedo's contribution is interesting, but Japanese records don't seem to bear it out. This is first hand history, written by an outstanding submarine commander who also happened to have a nice touch with the narrative form. Wahoo should be one of the basic volumes in any submarine library.

How the Silent Service came to wage "Unrestricted Warfare"

Published by Thriftbooks.com User , 21 years ago
Submariners accounted for less than 2% of the entire U. S. Navy in World War Two - but they accounted for 60% of Japanese merchant marine losses and 30% of Japanese navy losses. After the war, Japanese officials conceded that the virtual strangulation of the Japanese home islands - largely by the U.S. submarine force - was the primary cause for the defeat of the Japanese military. How this victory was won is told in microcosm by Dick O'Kane's fine book on USS WAHOO (SS238). O'Kane served as Executive Officer on WAHOO for every patrol but its last - and went onto to command his own boat, the legendary USS TANG (SS306) - which was also one of the most successful submarines of the war. After the attack on Pearl Harbor, the only effective offensive weapon available in the Pacific was the submarine, and the U.S. immediately commenced unrestricted submarine warfare. Unfortunately, the submarine force - like the rest of the Allied world - was not quite ready from the start to take on this new challenge. Boats immediately deployed long distances to take the war to Japan, but the results were mixed. Pre-war tactics - largely based upon remaining undetected as forward elements of battleship-based fleet movements - were of very limited value in independent, forward deployed operations against the Japanese. WAHOO's first patrols reflected this defect - the CO was unwilling and untrained to engage in aggressive actions to find and pursue (for the most part in surface transit) and engage in risk taking to ensure the destruction of high value Japanese targets. It was only with the insertion of younger officers - WAHOO's LCDR "Mush" Morton was among those that showed the way early on, revolutionizing the submarine force and its tactics - that significant victories were realized. The courage of these crews - sailing alone thousands of miles from base to engage the enemy in their home waters - cannot be denied. Their intelligence, innovation, hard work and persistence should also be credited. The challenges that were overcome were intimidating - one of the greatest being the U. S. Navy's own Ordnance Bureau. The gross deficiencies in the quality and effectiveness of the U.S. Navy's torpedoes in World War Two were criminal. The WAHOO deployed in the Sea of Japan - on their penultimate patrol - and every warshot fired was a dud. The Navy Bureau's response was to deflect blame on to the boats for poor shooting - an unconscionable act of cowardice, when the facts were that torpedoes had never been tested to accurately judge their performance in realistic scenarios. Improvements were made, but the U. S. Navy Bureau of Ordnance never delivered an effective weapon to the U.S. Navy submarine force in World War Two. O'Kane's "WAHOO" reads like a thrilling novel of fiction - but in fact documents the emergence of the dominant force in winning the war in the Pacific against Japan. The price paid was high. 22% of submariners never returned from patrol - th

WAHOO leads them all!

Published by Thriftbooks.com User , 22 years ago
WAHOO tells the story of USS Wahoo (SS238) as told by her former Executive Officer. This is the story of the life and death of one of the best submarines and Commanding Officers that served in the Pacific Theater of Operations.Written by a man who would go on to glory as Commanding Officer of his own boat (USS TANG), Richard H. O'Kane tells a gripping and factual tale of how the boat went from being a nondescript boat to the best in one patrol. Dudley W. Morton, who took command of the Wahoo after her second patrol threw away the book of instructions and rewrote submarine doctrine for all the others to follow.The book shows how he allowed Lt. O'Kane (XO) to man the scope during all attacks , how they entered a Japanese harbor and topedoed a Destroyer there. Also in the same patrol "in a fourteen hour running gun battle" She sinks an entire convoy of tankers and transports.Sadly, in war, the consequences of ones actions can and sometimes do catch up with even the best. O'Kane weaves a plausible tale as to what may have happened to Wahoo when she was sunk. I say plausible because since the publication of this book and the death of Radm O'Kane, new information has come to light shedding the mystery of Wahoo's loss. As she left the Sea of Japan through La Perouse Straits on the morning of 11 October, 1943, she was fired upon by shore based artillery. When she submerged to avoid further gunfire, she appeared to have struck a mine. Japanese air and sea units responding noticed a stream of oil & bubbles and attacked and sadly finished her off.This book is highly recommended to all.

This book is outstanding

Published by Thriftbooks.com User , 24 years ago
There are already tremendous reviews for Admiral O'Kane's other book, Clear the Bridge, in which he recounts the exploits of U.S.S. Tang. I was surprised not to see more comments of this book, in which Adm. O'Kane describes Wahoo, a sub of great importance and his time serving as Exec for her skipper, Dudley Morton, a true hero of WWII. I had been fascinated by both these submarines since I was a kid and I was highly pleased to discover this book even though it was some years since it was written. In addition to providing a riveting look at Wahoo's exploits in the war and at Cdr. Morton's superb method of command, the book addresses the subject of defective U.S. torpedoes and their possible role in Wahoo's end. In Clear the Bridge, the author describes how he and his crew on Tang tried to identify and correct torpedo problems while on combat patrol. Clearly these problems may have had severe consequences for Wahoo. How our submarine forces overcame the defective torpedo problem while waging the war against Japan must be one of the great stories of WWII. Great book.
Trustpilot
Copyright © 2022 Thriftbooks.com Terms of Use | Privacy Policy | Do Not Sell My Personal Information | Cookie Preferences | Accessibility Statement
ThriftBooks® and the ThriftBooks® logo are registered trademarks of Thrift Books Global, LLC