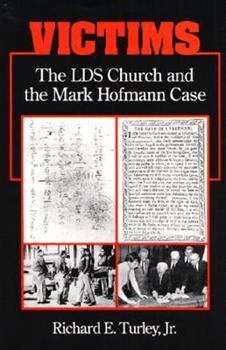 Victims: THE LDS CHURCH AND THE MARK HOFMANN CASE

Three pipe bombs exploded in Salt Lake County in 1985, killing two people. Behind the murders lay a vast forgery scheme aimed at dozens of other victims, most prominently the Church of Jesus Christ of Latter-day Saints. Mark Hofmann, a master forger, went to prison for the murders. He had bilked the church, document dealers, and collectors of hundreds of thousands of dollars over several years while attempting to alter Mormon history. Other false...

Published by Thriftbooks.com User , 18 years ago
The first reviewer to this book is probably robert lindsey himself, or at least some one who's trying to slyly sway the opinion of some unsuspecting shopper toward the 'anti' end of the spectrum.

Published by Thriftbooks.com User , 20 years ago
This is one of several books written in the wake of the murders and forgeries committed by Mark Hofmann in the early 1980s. Hofmann forged hundreds of documents, but it his forgeries affecting Mormon history is the focus of this work. Several of these forgeries went to the heart of Mormon origins, and were done in an apparent effort to embarrass The Church of Jesus Christ of Latter-day Saints. In financial trouble, Hofmann murdered Steven Christensen and Kathleen Sheets to delay discovery of his duplicity.Turley begins his account by reviewing the canonical account of the Church's origins and a history of other prominent forgeries intended to discredit the Church. Turley then goes over the history of the Hofmann case. An appendix lists all known documents acquired by the Church from Hofmann. Unlike other writers, he had access to a wealth of Church documents. The result is a well-documented account presenting the Church's side of the story. Though he is hardly objective in his account, he avoids the sensationalism characteristic of the so-called true crime novel. His tone is mainly that of a scholarly historian.The Hofmann case is extremely complicated, involving Church officials, Mormon historians, document dealers, journalists, law enforcement officers, attorneys, and others. Turley attempted to keep the major characters in focus, but the reader is still liable to get lost. I found myself going back over previous material several times to keep everything straight. Fortunately, this book contains an index.Complicating things further, Turley often digresses from the narrative. Sometimes, the digressions are faith-promoting stories more suited to Church magazines. In others, they seem like personal attacks against real or perceived enemies of the Church. Turley also occasionally pauses to score an apologetic point. Turley should have omitted these things entirely or relegated all of this to the notes. This material is not very appropriate to what is supposed to be a scholarly history.Hofmann said he was not afraid of being caught by divine inspiration (316). Some people have raised the question of why the Church's "prophets, seers, and revelators" did not detect Hofmann's forgeries. To his credit, Turley does not attempt to answer this question. While this is perhaps an interesting theological question, it would be out of place to try to answer it in a historical work.This book exists in relationship to other books on the Hofmann case. Turley has relegated most of the direct interaction to the notes. Discerning Turley's intent concerning these books is not easy without reading them. It seems clear he wants to refute the work of Steven Naifeh and Gregory White Smith (The Mormon Murders [New York: Weidenfeld and Nicolson, 1988]). Other sources tell me this work is most distorted account of the Hofmann case. Richard Lindsey's A Gathering of Saints (New York: Simon and Schuster, 1988) is not mentioned as often. Turley may be

A Very Solid Treatment of the Case

Published by Thriftbooks.com User , 21 years ago
This is a fine and careful account of a very difficult and complex subject. Much better than the several more lurid books out there on the market. Incidentally, if the reviewer below thinks that inspired people cannot be deceived and believes that the biblical Joshua was an inspired man, he should have a look at Exodus 9.

Published by Thriftbooks.com User , 22 years ago
Richard Turley, managing director of the LDS Church Historical Department has pieced together as no one else has (or possibly could) events leading up to the senseless Salt Lake City bombing deaths of Steven Christensen and Kathleen Sheets in 1985. Mark Hofmann, master forger, document dealer (and document thief) was behind the murders and was apprehended only after he accidentally set off a third bomb intended for someone else, nearly killing himself in the process. Besides providing full documentation of the involvement of LDS church authorities in document deals with Mark Hofmann, Turley renders an invaluable service to historians, document dealers and genealogy buffs by listing (pp. 346-394) all materials--from a bogus 1844 Presidential Campaign token for Joseph Smith, to affidavits, letters, journals, legal documents, and printed banknotes--known to have been handled by Hofmann during his short-lived career. Some of the legal documents have been returned to their original repositories (such as the Hancock County courthouse in Carthage, IL) from which they were stolen by Hofmann and his associates during the 1970s. Even a cursory reading of the entries will send chills down the spine of any student of early Mormonism. And now it appears that Hofmann's forgeries are becoming collectibles...Turley's book should be read only after you have enjoyed the more accessible (and slightly less scholarly) Salamander by Linda Sillitoe and Allen Roberts, first published in 1988.

Published by Thriftbooks.com User , 22 years ago
I thought Turley did a great job of researching and reporting this story. The footnotes often compare what has been previously published about the Mark Hofmann case with the facts Turley has laid out. His view comes from the inside of the LDS church history department where he has access to the documents in question and the people involved.
Copyright © 2020 Thriftbooks.com Terms of Use | Privacy Policy | Do Not Sell My Personal Information | Accessibility Statement
ThriftBooks® and the ThriftBooks® logo are registered trademarks of Thrift Books Global, LLC