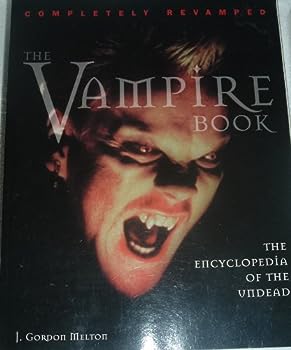 The Vampire Book: The Encyclopedia of the Undead

Nori and Sandra Pope show how to harness the gorgeous power of color in the garden. Working through the spectrum, readers learn how each color, from the drama of red to the cool restfulness of blue, can be used to evoke a particular mood or image.With 300 stunning color photographs, the authors illustrate how to continue the same color theme throughout the year. This practical book offers advice on texture and plant combinations; gives sources for...

Published by Thriftbooks.com User , 18 years ago
Written by religious scholar and head of the Transylvania Society of Dracula's American chapter, J. Gordon Melton, "The Vampire Book" is an impressive attempt at a comprehensive reference work on vampire lore, from the emergence of documented vampire folklore in the 11th century to the present fascination with vampires in literature, film, and our popular culture. This mammoth volume (919 pages) begins with an forward by Martin V. Riccardo of the Vampire Studies network in which he presents an informative overview of the history of vampires in world cultures. Author J. Gordon Melton's preface addresses the important and sometimes perplexing question: What is a vampire? And there is a chronology of important events in vampire history from the year 1047 to 1997.The bulk of "The Vampire Book" is 802 pages of encyclopedia that addresses a wide variety of subjects, in alphabetical order, relevant to vampire culture in literature, film, theater, folklore, history, and gaming. Entries for people include writers, actors, directors, and vampire scholars. As an example, the long entry for "Blood" recounts the significance of blood in ancient Biblical and secular traditions and vampire mythology. "Greece, Vampires in" presents the history of vampire legend in Greece. Each entry is followed by a list of sources. Among novels, films, and authors, only works that are considered significant or pivotal are given a separate entry. For example, the "Blade" comic book serial has its own entry. The 1998 film "Blade" does not, although it is alluded to under some other subjects. There are some black-and-white photographs scattered throughout the book, and there is a 16-page color insert in the center. For those who own the first edition of "The Vampire Book", this "revamped" edition has 100 additional topics and updates on other entries. The vampire filmography that was included in the first edition became too unwieldy. It has been expanded and is now published as a separate book: "VideoHound's Vampires on Video".Vampire fanatics and casual fans alike will find the "Vampire Resources" section in the back of the book useful. There are lists of vampire organizations, periodicals, and websites in North America and Europe, including separate lists for "Dark Shadows" fans. Vampire dramas on stage and all "significant" vampire novels from 1897 to 1997 are listed. There is a bibliography of vampire non-fiction and literary criticism. And if the subject you seek isn't where you thought it would be in the encyclopedia, there is a 50-page index to assist you.I'm sure that there will be disagreements on what should or should not have been included in "The Vampire Book", but this is about as comprehensive as we can expect a reference work covering 1,000 years of vampires in popular culture to be. J. Gordon Melton's research is impressive. His writing is fluid and not as dry as might be expected. I'm only a casual fan of vampire film and literature, so I thought that I would use

Published by Thriftbooks.com User , 19 years ago
This book provides an A to Z, completely thorough guide to all things relating to vampires. From aconite, to Dark Shadows, to the Vampire Lestat Fan Club, to vampire characteristics. This book also seems to talk about two aspects of vampirism. The Hollywood side, and the real side - including myths, legends, historical accounts, authors of fiction novels, vampirologists, vampire researchers, poets, etc. The Hollywood side of this book covers television shows (Buffy the Vampire Slayer, Dark Shadows), movies (Interview with the Vampire, Blade, those old 70s porn flicks, Bela Lugosi, etc. even stuff I've never heard of), famous vampire actors and actresses, film directors. While it does seem that the book is dominated by the Hollywood aspect of the vampire, it does talk about everything you can think of relating to the vampire in every culture and legend. Vampires in Africa, Australia, Russia, China, Spain, Bulgaria... The book discusses in length about fangs, blood, skin, methods of killing the vampire, immortality, flying, so many to list.It's quite a heavy book, too. It contains a timeline of real vampire events, when books were published, when historical vampire figures (Vlad, Bathory, to name the obvious) were around, when vampire criminals did their crimes and were punished, all this dating back to the 1400s atleast. Its about 2.5 to 3 inches tall, and has a giant reference in the back, including websites to visits, theatrical plays to see, works of fiction to read, businesses that sell vampire memorabilia or occult items, magazines to subscribe to, or who to write to.It is definately worth the price. This book is my best vampire book on my shelf. Anyone who has ever loved the vampire needs to get this book!

The Best Encyclopedia of the Undead Out There Tonight

Published by Thriftbooks.com User , 21 years ago
Okay, forget that for some reason that passes understanding Keifer Sutherland from "Lost Boys" is the vampire pictured on the cover. This is THE Encyclopedia of the Dead and, as the cover proudly complains, this edition is "Completely Revamped." If you enjoy vampire stories and are trying to keep straight the difference between the vampires of Stoker and those of Anne Rice, this book is for you.Martin V. Riccardo's Foreword, "A Brief Cultural History of the Vampire" is a solid introduction to the subject matter. The tome's editor, J. Gordon Melton, answers the age old question "What is a Vampire?" in his preface. There is also a Vampire Chronology. But the guts and glory of this book is the 900+ pages of entries."The Vampire Book" gives equal weight to appearances of the vampires in the mass media and in the folklore of the world. You can read all about "Buffy the Vampire Slayer" in film and on television and then also learn that the late Denholm Elliot played a memorable Dracula in a British television version in 1969. You can find out about vampires in Scandinavia as well as the historical Dracula, Vlad Tepes the Impaler. Attention is paid to such things as blood, vampires and science-fiction, and vampire games (both board and role-playing). All entries are cross-referenced by bold-faced type, which allows you to skip around from article to article-a lot more fun than just proceeding alphabetically. You can being with "Ackerman, Forrest James (1916-- ), which leads you to "Vampirella," then to "stake," and in turn "Bela Lugosi," "Transylvania," "Szekelys," "Bran Stoker," and on and on until suddenly the night has passed, the sun is coming up and you are turned into a pile of vampire dust (see: "Sunlight," pp 660-661).

Everything you ever wanted to know about vampires......

Published by Thriftbooks.com User , 22 years ago
This is exactly what it's name presents it to be, an encyclopedia of everything vampire, and possibly anything even remotely related to vampirism. This is not a book that can just be read through like a novel. Entries are in alphabetical order, names of actors etc. are last name than first. Absolutely everything is in here, from The Forever Knight Fan Club to the vampire in poetry. The people in this book (actors, writers, researchers, etc.) have biographies on their lives, and their involvement in the world of vampire. Anne Rice is in this book (of course), she has a short bio and a list of her works. You will also find Vlad The Impaler, with a REAL history and a telling on how legend springs from real life horror. If you would like to know about the real castle Dracula, or maybe I should say castles (buy the book to find out), you need only look under "C". I was very impressed by the thouroughness if this book and how well researched it is. It seems if you were to think of anything to look up in here, no matter how obscure, you would find it. There are good bits of history, including vampire legends in different countires and continents (including China). I find these histories to be fascinating, telling all about the different forms of what we call vampires have taken all over the world.So if you have any fascination with the undead, or you want to find out where the word "vampire" came from, or where the garlic and crosses idea originated, or what vampire comic books have been printed, this is the book for you. I don't think you will find a more thourough or better researched vampire reference book anywhere.

Published by Thriftbooks.com User , 22 years ago
Mr. Melton's 852-page book is truly encyclopedic. It is well-indexed. It includes brief discussions of vampiric cultural history, "What is a Vampire?", and vampiric chronology. It provides individual detailed discussions of worldwide vampire-related topics. The book's Appendices provide comprehensive listings of vampire "resources", filmography, drama, and novels.The book's encyclopedic organization *does* present a problem to the "front-to-back" reader. Identical material is repeated in related entries because each entry is meant to stand alone. This repetition is quite evident to the front-to-back reader.One criticism: the sexual aspects and psychology of vampirism were not discussed in the detail they merit. Vampires control their (usually opposite gender) victims magickally, and vampires have (usually recurring) physical relationships with their victims. In some cases vampires kidnap and imprison their victims. These sexually dominant aspects of vampirism are emphasized in vampiric literature, drama, and cinema. Furthermore, vampires draw blood, a concern in today's environment of sexually-transmitted diseases. A more complete discussion of vampire sexuality and today's vampire cult practices would have been welcome.This book is difficult to read, but will assist you in your next Trivial Pursuit game!
Trustpilot
Copyright © 2022 Thriftbooks.com Terms of Use | Privacy Policy | Do Not Sell or Share My Personal Information | Accessibility Statement
ThriftBooks® and the ThriftBooks® logo are registered trademarks of Thrift Books Global, LLC