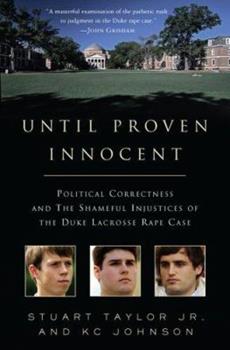 Until Proven Innocent: Political Correctness and the Shameful Injustices of the Duke Lacrosse Rape Case

What began that night shocked Duke University and Durham, North Carolina. And it continues to captivate the nation: the Duke lacrosse team members' alleged rape of an African-American stripper and the unraveling of the case against them. In this ever-deepening American tragedy, Stuart Taylor Jr. and KC Johnson argue, law enforcement, a campaigning prosecutor, biased journalists, and left-leaning academics repeatedly refused to pursue the truth while...

Justifible outrage leaps from every page

Published by Thriftbooks.com User , 15 years ago
This is a story of 21st Century America. A woman claims she was raped and sodomized by three young men. The men are all young, white and members of the Duke University lacrosse team, a sport presumed by many to be played only by the rich. Their accuser is black, the unmarried mother of two children, a stripper and perhaps a prostitute as well. Within days, a large swath of the left-leaning mainstream media, left-wing Duke faculty and an aggressive white District Attorney seeking the votes of a largely black population are declaring the guilt of the three Duke lacrosse players. Justice be damned; this to them is an issue of class, race and gender. KC Johnson is a history professor at Brooklyn College and CUNY. Thousands of people, including myself, became familiar with him through his blog, Durham-in-Wonderland, which chronicled the events in this outrageous travesty of twisted law enforcement, political correctness, biased reportage and racial politics. Stuart Taylor, Jr. is a columnist for the National Journal and a contributing editor for Newsweek. Outrage is present on every page in measured tones as the authors outline the depradations of Mike Nifong, the man who willingly incited Durham's black population in a quest for their votes by referring to the victim's allegations as true, by calling the Duke lacrosse players "privileged white boys", by asking why would the targets of a rampaging DA hire lawyers if they had done nothing wrong, publicizing untrue details of a non-existent crime and worse. But Nifong, who was ultimately disbarred for his prejudicial comments and his subsequent withholding of exculpatory evidence is only part of the story. Nifong was helped by apparently dishonest or incompetent police officers, by the Duke Medical Center which hired a feminist idelogue as a Sexual Assault Nurse trainee and who changed her stories to fit changing needs, by a gospel singing investigator who thought nothing of intimidating defense witnesses and helping the alleged victim change her story (again) to smooth over the gaping holes in the prosecution case. It would be awful enough if the story was just about this cast of people who wanted to railroad three young men into thirty year prison terms to serve their narrow, selfish interests. But there was the Duke faculty, particularly those who taught in African-American, women's studies and similar departments. Before any evidence was available, 88 of these faculty members (Group of 88) signed an ad that essentally presumed guilt. All of them were left-wing activists who saw everything as a matter of race, class and gender. To them this was a case made in heaven. There could be no doubt about the accuser's shifting stories because the accused were rich white boys. The well justified and supremely well documented outrage pours from every page as the authors examine these left-wing activists and their impact on the case, Duke and academia as a whole. How any one can read

Published by Thriftbooks.com User , 15 years ago
UNTIL PROVEN INNOCENT: POLITICAL CORRECTNESS AND THE SHAMEFUL INJUSTICES OF THE DUKE LACROSSE RAPE CASE. UNTIL PROVEN INNOCENT is more terrifying than any thriller you will read this year. Stuart Taylor, Jr., and KC Johnson trace what happened when three young men were falsely accused of rape. Rather than being defended by Duke University, they were defamed, threatened with castration, thrown to the rogue prosecutor. Many Duke professors as the "Group of 88" egged on the mob who had begun to harass the lacrosse players. There were almost no heroes at Duke, although a very few professors ultimately spoke out against the rush to judgment which proved to be a rush to the wrong judgment. The women's lacrosse coach Kerstin Kimel is depicted here as the kind of person you wish you had been when you look back at a crisis you lived through. Her decency and bravery shine in this dark book. KC Johnson is another kind of hero: the American professor who sensed that something wrong was going on at Duke and set out to document the events in a blog that ultimately helped turn the tide against the Duke mob. One of the most terrifying sections of this book shows that rather than being punished after the truth was undeniable these professors in the Group of 88 were rewarded with greater control of Duke committees. One of the most exciting sections shows how bloggers became heroes when the national media, including Nancy Grace and the New York Times, had joined the mob. This section gives hope that other national lies will be exposed promptly and exposed repeatedly until the country pays attention. The times have changed for the better in this regard even if the Times has not. Knowing that Brodhead, the master of sly innuendo, as a literary critic habitually ignored the facts and rushed to judgment, whatever the cost to his victim's reputation (see Nineteenth-Century Literature, Vol. 62 [June 2007] pp. 29-47), I recognized the weakling Taylor and Johnson portray in "Richard Brodhead's Test of Courage": "Confronted with a crisis of epic proportions, with Duke's hard-won reputation at risk, he faced his ultimate test of courage. And in an extraordinary moral meltdown, he threw in his lot with the mob." The only criticism I have of this book is that the publishers should have put "Rape" in quotation marks, since no rape occurred.

Political Correctness as a Corrupt Sword

Published by Thriftbooks.com User , 15 years ago
This book does not mince words. Certain unscrupulous academicians, certain radical feminist and black studies scholars, certain woefully misguided editorial boards of well-known newspapers, and certain dishonest Durham public servants all were singularly bent on destroying the lives of three young people, and the families that love them, solely because they happened to have been born white males. This is a superbly crafted but chilling, and at times extremely depressing, narrative detailing how persons with no interest whatsoever in the facts were zealously motivated to punish these young men not for what they did (because they did nothing) but because of what they are, and because they seemed to embody "white male privilege." The narrative, which chronicles the facts in a manner beyond compelling, renders this conclusion inescapable. (One suspects those who declared the boys "guilty" from the time they were fingered in an immoral and unconstitutional line-up surely must not be happy that the accuser, in fact, was not raped. If so, that would be the most twisted thing about this sad affair.) This may be the definitive case study to illustrate how prominent crusaders against unfair stereotyping in other contexts are themselves more than capable of stereotyping and unfairly prejudging, and destroying lives, when it happens to suit their agendas. Aside from the damage caused to three young lives and their families, such shameful misconduct tarnishes what responsible black and feminist leaders have worked so hard to accomplish. Bravo to the authors for this epiphany.

The must have book for those interested in the Duke case

Published by Thriftbooks.com User , 15 years ago
This is truly the definitive book for those looking to get the entire story of the despicable Duke rape hoax. Perhaps even more scary than the book's depiction of disgraced DA Nifong, are the sections on the Duke professors and officials who were so willing to destroy (i.e. send to prison for 30 years) 3 innocent boys in the name of political correctness. It makes you wonder if these people have a conscience and how they are in charge of teaching young people. The authors present very granular evidence of the incomptence of Duke President Brodhead, who comes across as a coward, and also the group of 88 "professors" who still teach at the school. These folks, plus the DA and police have made the name "Duke" soiled. This book makes sure that they will be remembered for the cruel fools they are for eternity.

Such a pleasant read from a nasty affair.

Published by Thriftbooks.com User , 15 years ago
I've been captivated by the Duke Lacrosse Scandal since the indictments were first handed down. I found KC's blog in August and looked forward to reading his insightful, intelligent, and down-to-earth posts every day. I hoped his book would be just as organized and fun to read as his blog, and I must say it hasn't let me down. It arrived yesterday and I muted everything to curl up with it after school. It went very fast and had noticeable bits of KC's dry humor. It appropriately skewers the right villains: the Gang of 88(+23) - there's no shortage of fodder here, revealed to be pseudo-intellects (and scared punks unwilling to defend their words in unstaged public forums); Duke administration - specifically Broadhead; the media - the NYT and Nancy Grace; and Nifong. It does not skewer the NC politicians who sat back and did nothing as much as I think they deserve. My *only* issue with the book, as well as in his blog, is the Steve Monks affair. The book has speculated, without any evidence, and none brought to light in the book, that Monks had some ulterior motive for running, other than being a deluded person. I really can't reach that conclusion based on the scant mentionings that KC and Stuart have alluded to. Other than that, I feel that the other speculated motivations put forth in the book are fair (i.e. the motivation of the G88) considering the context. I think it's fitting that this book was released a few days after Nifong was sentenced to his symbolic stint in jail. The real bottom line of the book is that affects of Nifong's actions reach far beyond the court. Nifong's narcissism exposed the pervasive bias in media, on college campuses, and among our most influential and the unchecked power prosecutors have. It also exposed how quickly some are willing to latch on to a narrative. And instead of admitting that the narrative may be, and can be wrong, are willing to reach intellectual dishonesty to keep it true. KC's blog was a breath of fresh air during the entire affair and this book has immortalized that which I'm sure many want to forget. __ (This is response to another reviewer primarily, but I think it's helpful to all) This book wasn't meant to tell the story of the three accused as much as it was about exploring the various themes around the events that ultimately ended by vindication. Yes, the three are central to the book, but only as background to the real issues brought up in the book. The book is timely because all of those properly denounced in the book have yet to revisit what has been proven wrong. All of the allegations that were made in the days after the 'rape' have yet to be addressed. And more importantly, the sense you get from the book is that there's a frustration there isn't a mechanism to force people, in situations such as this, to 'put up' (for lack of a better word). The very institutions that are supposed to do encourage this kind of dialog, failed miserably. In a perfect world
Trustpilot
Copyright © 2022 Thriftbooks.com Terms of Use | Privacy Policy | Do Not Sell My Personal Information | Cookie Preferences | Accessibility Statement
ThriftBooks® and the ThriftBooks® logo are registered trademarks of Thrift Books Global, LLC