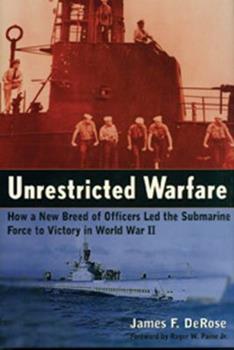 Unrestricted Warfare: How a New Breed of Officers Led the Submarine Force to Victory in World War II

Probing Look at Some Top-scoring U. S. Sub Skippers!

Published by Thriftbooks.com User , 16 years ago
There have been many fine books on the U. S. submarine campaign in the Pacific and this should be added to the list. It's a fresh, insightful look at some of the sub commanders who, through their aggressiveness and tactical innovations, helped make that campaign the success it was. The book concentrates on a group of officers - Dick O'Kane, George Grider, Roger Paine -who learned their trade under the legendary 'Mush' Morton on USS Wahoo. In contrast to the cautious U. S. sub skippers produced by the peacetime Navy, Morton was aggressiveness personified, taking his ship in harm's war when others might have turned away. Morton and his Wahoo team of O'Kane, Grider, Paine and others came up with tactical innovations that helped sink 55,000 tons of Japanese shipping before Wahoo's loss in October 1943. O'Kane and Grider went on to become top-scoring skippers in their own right. O'Kane in particular inherited Morton's mantle when he commanded USS Tang, being even more aggressive and even more successful in terms of ships sunk, 93,000 tons worth. This book doesn't pretend to be an all-inclusive, exhaustive account of every WWII USN submarine. DeRose does interweave the story of other subs and skippers against the backdrop of the Wahoo-Tang-Flasher saga. UNRESTRICTED WARFARE is, however, a fresh, in-depth, warts-and-all account of a singular group of officers based on in-depth research that drew on interviews with surviving crewmen and American and Japanese combat records. DeRose's book is a wonderful read. I can't remember when I enjoyed a book on U. S. sub operations as much as this. Morton, O'Kane, Grider and the others come to life as complex, intriguing, sometimes irritating human beings. Warriors all, their story is well told in this marvelous book!

Published by Thriftbooks.com User , 20 years ago
There are plenty of books on the U.S.-Japan sub war, noteably the highly detailed "Silent Victory" by Clay Blair Jr. If you're looking for a good overview of the subject, however, this book is a great start. It primarily covers the leadership of Mush Morton aboard USS Wahoo, who was the first of a new breed of aggressive commanders who took the battle to the Japanese, and the other officers who learned the "Wahoo way" under Morton and went on to successful commands of their own. Next, it covers the patrols of Dick O'Kane, Morton's former XO, as he leads aggressive, successful patrols into Japanese waters. Also covered are torpedo malfunctions and other problems that caused patrols to be less successful than they could have been, but the concentration here is on men who lead the way aggressively taking the war to Japan. A fine volume to get you started on the topic; you might follow with O'Kane's books, "Wahoo" and "Clear the Bridge," and "The Bravest Man" about O'Kane himself.

Published by Thriftbooks.com User , 21 years ago
"Unrestricted Warfare" is a fascinating book mainly concentrating on the power team from the USS Wahoo-"Mush" Morton, Dick O'Kane, George Grider and Roger Paine Jr. To put it simply, I doubt whether any of these men particularly Morton and O'Kane would have got a submarine command in peacetime but once war broke out, they became legends. The book examines in detail, the patrols of Wahoo in a way that hasn't been done before and the chapter on its last patrol is hard to put down. The author to his credit does not make plaster saints of Morton and O'Kane but portrays them as the very human people they were.My only regret is that the author did not study other skippers in depth particular Gene Fluckey, Slade Cutter, Ned Beach or Dusty Dornin. A great book that leaves the reader with one query-why didn't Mush Morton get the Medal of Honor-it was awarded for lesser actions in WW2 ie:MacArthur.

Published by Thriftbooks.com User , 22 years ago
DeRose has a unique skill that transports the reader to a time and place that he or she can not imagine. When I entered the armed forces in WWII, serving on a submarine was easily on the bottom of my list. After reading "Unrestricted Warfare" I now better understand the rational for my decision. DeRose draws a stark and honest picture of unrelenting stress, anxiety and vulnerability for the officers and enlisted men as they embark on their submarine patrols. The heroic stories of the lives of several submarines and their crews left me engaged, exhausted and thrilled. These men had to have been half-crazy to volunteer for such service. We do, however all owe them an undying debt of gratitude for their contributions to the defeat of the Japanese in the Pacific. DeRose's book is a must read.

Published by Thriftbooks.com User , 22 years ago
Unrestricted Warfare is an excellent "captain's eye view" of submarine combat in the Pacific during the Second World War, and an essential volume for those interested in naval history or military leadership. Thoroughly researched with help from the Japanese side, the book tells its story by tracking the wartime careers of several submarine officers who became the Silent Service's top scorers ever, including Richard O'Kane and "Mush" Morton. Unrestricted Warfare is hardly a puff piece, however: the author unflinchingly reveals the truth behind several wartime atrocities, while also explaining in detail the tumultuous political climate and leadership failings that beset the submarine force during the war. DeRose also does a fine job reconciling the often inflated claims of wartime reports with newly uncovered data, and the book features many illustrations never before seen in print.
Trustpilot
Copyright © 2022 Thriftbooks.com Terms of Use | Privacy Policy | Do Not Sell or Share My Personal Information | Accessibility Statement
ThriftBooks® and the ThriftBooks® logo are registered trademarks of Thrift Books Global, LLC