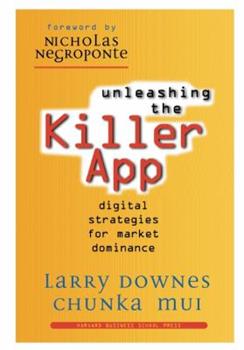 Offers a progressive guide to transforming your company into a place where killer apps are born. This title identifies the twelve fundamental design principles for building killer apps. It illustrates these principles with classic stories from history and examples from a range of industries that have successfully developed killer apps.

CEOs must read to align strategy with digital technology

Published by Thriftbooks.com User , 20 years ago
"In the end, the real distinction between digital winners and losers is always found in the boardroom" are saying to us Larry Downes and Chunka Mui in their book: Unleashing the Killer App. They think that too often senior managers still believe that technology is essentially a tool to implement strategy rather than the basis of forming it. These executives did not realize that technology became a disruptive force shaking their industrial strategies previously defined in a more stable business environment.How this could happen? The authors explained in the first chapter that, in a new networked environment, joined Moore's law -every 18 months, processing power doubles while cost holds constant- and Metcalfe's law -the utility of a network equals the square of the number of its users- are dropping exponentially the transaction costs. As transaction costs discovered in the 30's by the economist Ronald Coase are defining the size of the organizations, we can easily understand the increase of mergers, downsizing and outsourcing to keep industrial firms competitive to face new appearing competitors using all the potential of the technology.In the industrial age, sustainable competitive advantage required leverage over at least one of the Michael Porter's "Five Forces" customers, suppliers, competitors, new entrants, and substitutes. In the digital age, surrounding these five forces are three new forces: digitization, globalization, and deregulation giving harder time to achieve competitive advantage. The value chain is under extreme pressure and is asking to implement a new digital strategy. Such strategy must be constantly rethought and shared by the total organization. Strategy time frame is shrinking from three, five years to 18 months and well thought plans are replaced by moving projects and experiments to test new ideas.In the second chapter the authors are asking us to design our own killer apps to avoid somebody else to do it. A killer app is a new good or service that establishes an entirely new category not in a scheme of an incremental change but in discontinuity and in big leaps.Three categories of killer apps are proposed, each one including four killer apps from the external of the organization to networks and to the internal, from the customers to your partners and to your employees.External -reshaping the landscape- asked to outsource to the customer to integrate the customer in your production process, to cannibalize your market before somebody else is doing it, to treat each customer as a market segment of one for personalization - customization, and to create communities of value for enlarging customer experience.Networks -building new connections- asked to replace rude interfaces with learning interfaces to gain mutual trust, to ensure continuity for the customer not for yourself to transfer him the advantages of new technology applications, to give away as much information as you can to add value to your information assets, and to

The ROI of Innovation

Published by Thriftbooks.com User , 20 years ago
I've just re-read this book and think more highly of it now than I did previously. Larry Downes & Chunka Mui define a "killer application" as "a new good or service that establishes an entirely new category and, by being first, dominates it, returning several hundred percent on the initial investment." As they explain, the primary forces at work in spawning today's "killer apps" are both technological and economic in nature. "The technology we are concerned with is the transformation of information into digital form, where it can be manipulated by computers and transmitted by networks." Digital strategies are needed to achieve market dominance. The co-authors divide their book into three parts: Digital Strategy, Designing the Killer App, and Unleashing the Killer App. In Part I, there is a brief discussion of one "killer app" in the Middle Ages, the stirrup, which added mounted cavalry to the battle equation. The "lowly stirrup" played a singular role in rearranging the political, social, and economic structure of medieval Europe. In The Lever of Riches, Joel Mokyr identifies countless other "killer apps" throughout history such as paved streets and sewerage disposal; the lever, wedge, and screw; the heavy plow and three-field system; the weight-driven mechanical clock; spectacles; the printing press; the steam engine; the telegraph; the bicycle; ...each of which also had a truly profound impact. To repeat, Larry Downes & Chunka Mui concern themselves with the technology of transforming information into digital form. Thus in Part I, they examine the "killer app", explain what they call "the new economics", and then shift their attention to the nature of a digital strategy. They dully acknowledge the disruptive power of "killer apps" which can suddenly destroy the equilibrium of what appeared to be stable systems of commerce and government. For them, business change now originates with digital technology; more specifically, with "killer apps." Strategies are needed to manage (to the extent possible) their impact to achieve sustainable competitive advantage. These strategies must accommodate three new forces: digitization, globalization, and deregulation. The "dirty little secret" to which Gary Hamel has referred is that the strategy industry "doesn't have any theory of strategy creation." The success of any digital strategy may well be the result of what Hamel calls "lucky foresight." Downes & Mui seem to agree with Hamel while offering, in Part II, what they refer to as "a few rules of thumb." They suggest three stages of "killer app" design and carefully explain each. They identify 12 specific principles on which to base the design process. In Part III, they shift their attention to "Unleashing the Killer App" and correctly stress the importance of communication, one which "speaks with the language of ideas, scenarios, options, and what-ifs."In Chapter 7, the reader's attention is directed to two major corporations, McDonald's and VEBA A

Twelve Steps for the Information Entrepreneur

Published by Thriftbooks.com User , 22 years ago
Twelve principles of killer app design: 1) Outsource to the customer, 2) Cannibalize your markets; 3) Treat each customer as a market segment of one; 4) Create communities of value; 5) Replace rude interfaces with learning interfaces; 6) Ensure continuity for the customer, not yourself; 7) Give away as much information as you can; 8) Structure every transaction as a joint venture; 9) Treat your assets as liabilities; 10) Destroy your value chain; 11) Manage innovation as a portfolio of options; 12) Hire the children.

Life and Death in the Digital Marketplace

Published by Thriftbooks.com User , 22 years ago
The authors define a "killer application" as "a new good or service that establishes an entirely new category and, by being first, dominates it, returning several hundred percent on the initial investment." As they explain, the primary forces at work in spawning today's "killer apps" are both technological and economic in nature. "The technology we are concerned with is the transformation of information into digital form, where it can be manipulated by computers and transmitted by networks." Digital strategies are needed to achieve market dominance. They suggest several, each worthy of careful consideration. For me, this book has two great values: It helps us to understand what a "killer app" is and can accomplish; also, for those lacking a "killer app" and without much chance of possessing one, it suggests how to increase and enhance the appeal of what one does have, such as it is. Given a choice, of course, anyone would prefer to have a "killer app" when proceeding into an uncertain future. Lacking one, there are still opportunities to recognize...and to pursue. Most companies will not dominate but can survive if committed to the appropriate strategies. For them, this book could well be the difference between life and death.

Excellent book on grasping the basic rules of digital econ.

Published by Thriftbooks.com User , 23 years ago
EXCELLENT and fast reading...consultants should have this one on their "active" stack of books! I would actually give this book about 4 and 1/2 stars...because it didn't go into quite enough depth about actually implementing digital strategy. However, the way the authors skillfully apply Metcalfe's and Moore's Laws to the New Economy is eye-opening. Well-written...I like their 12 design principles to reshape a company the best of all.
Trustpilot
Copyright © 2022 Thriftbooks.com Terms of Use | Privacy Policy | Do Not Sell or Share My Personal Information | Accessibility Statement
ThriftBooks® and the ThriftBooks® logo are registered trademarks of Thrift Books Global, LLC