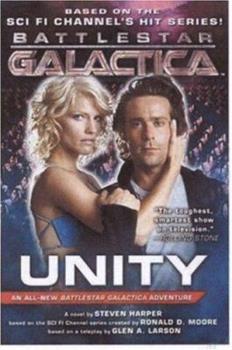 A prophecy is fulfilled when Peter Attis is rescued from the Cylons in order to save humanity with "the plague of the tongue." Or so it seems While harvesting algae for conversion into food, the beleaguered human/refugee fleet is discovered by a small group of Cylon raiders. A brief battle ends with the destruction of a Cylon heavy raider. A colonial issue escape pod found floating among the debris reveals two survivors inside: Singer Peter Attis...

Published by Thriftbooks.com User , 14 years ago
I wouldn't pay attention to pretentious nay-sayers on this book. I admit, it's no literary masterpiece, and there are holes in the story's construction. But if you have no ability to suspend disbelief, I wonder what you are doing watching Battlestar Galactica in the first place. I enjoyed it. It was fun. It starts off in an intense dog-fight between Raiders and Vipers, the Galactica and a Basestar....Then it gets a bit dry. However, once you're at the halfway mark, it's hard to put down.

Published by Thriftbooks.com User , 14 years ago
I've read all four of Tor's BATTLESTAR GALACTICA novels so far. The first two novels left me decidedly unimpressed; the miniseries novelization didn't really bring anything new to the table, and The Cylons' Secret had little to do with the series. Peter David's Sagittarius Is Bleeding was enjoyable, but was expected given the author; it wasn't until UNITY that I finally had some hope for the long-term future of the line. Taking place midway through the second season of the show, UNITY takes an opportunity to explore aspects of Colonial culture not really seen on the show. Author Steven Harper takes a closer look at the fleet than the show has to date, taking the chance to look at minorities who must populate the fleet, but that there's not time in a weekly television schedule to necessarily show. His counterpoints to the majorities presented in the show offer interesting alternatives, as well as adding versimilitude to the show. This is all in service of the plot of the book itself, though. Harper tells the tale of a scientific crisis in the fleet, one that quickly spirals out of control and into a military and political situation as things in the Fleet are wont to do. Throughout all this, Harper shows his mastery of the characters and setting (especially Baltar and Starbuck, the highlights of the book), treating them as the show would and offering tantalizing hints of their futures and pasts. His prion-based crisis is certainly believable and plausible, and one which couldn't easily be explored in the show without reams of exposition that could be far more gracefully integrated into a narrative as Harper did. UNITY doesn't offer any world-shattering revelations, or fundamental changes to the BATTLESTAR GALACTICA universe. But then, such isn't expected; it is, after all, a tie-in subservient to the ongoing show. But what UNITY does is it fleshes out the universe of the show, letting us seem some of what we can't in a 42-minute timeslot. Author Steven Harper's book does this, and does it quite well. I recommend it to any fan of the show.
Copyright © 2020 Thriftbooks.com Terms of Use | Privacy Policy | Do Not Sell My Personal Information | Accessibility Statement
ThriftBooks® and the ThriftBooks® logo are registered trademarks of Thrift Books Global, LLC