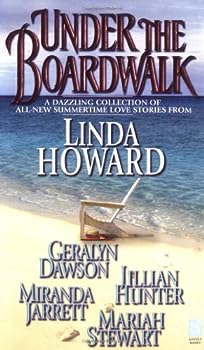 Under The Boardwalk: A Dazzling Collection Of All New Summertime Love Stories

Today's hottest romance stars make it a summer to remember -- with a sizzling story collection for sunny days and steamy nights.... Under the Boardwalk New York Times bestselling author Linda Howard... This description may be from another edition of this product.

Published by Thriftbooks.com User , 20 years ago
An odd mix of contemporary and historical from 5 strong writers.I enjoyed them all, but wished Howard's would be done into a full book. It left you wanting more. It is a really neat quirky tale of a harassed sheriff hating the "blue moon" because things went wrong and there were more weirdos out than usual. He meets a witch called called Lilah. Just wish these characters could have been made into a full story. This was so quick, especially considering it was Howard's name pushing the book. "Ruined" by Jillian Hunter is wonderful. A very strong, almost Gothic story that also could have benefited from a longer treatment. In 1843 her yacht crashed off of his cove of Cornwall. Rylan " DeWilde never expected to fall in love with his guest Sydney Windsor, especially after he learns she is engaged to marry his enemy. Would have made a super Big book!!! The weakest was "Buried Treasure" by Miranda Jarrett. About two men competing for the same woman, and one a pirate.Really enjoyed "Swept Away" about a PI chasing a woman he loves. But in order to keep on her trail, he must go home to a town full of bad memories.I am not big on westerns, but Geralyn Dawson's "Castaway" was very good. In 1883 Texas, Drew Coryell lives alone on an island. He peace is shattered when his ex-wife arrives, needing a big favour. She wants his help in tracing a precious heirloom, but finds love the second time around even more precious.Odd mix of contemporaries and historicals, but still very nice collection.

Five for the historical stories, but....

Published by Thriftbooks.com User , 23 years ago
I know Linda Howard is the big headliner here, but her story (and the other contemporary one) left me cold.I bought this book for the historical stories, which were quite good.Why didn't the publisher do all historicals (or all contemps) instead of half and half?Surely I'm not the only reader who likes one or the other but not both.I kept imagining this collection with a story by Mary Jo Putney or Jude Devereux instead. Now that would be a real five-star collection!

Lots of fun in this perfect summer-read!

Published by Thriftbooks.com User , 23 years ago
A great collection that I read in one day! Good summer stories, good authors made this very enjoyable. The best ones were by Linda Howard and Miranda Jarret, good enough that I went and ordered their new books, too. Highly reccommended!

How does harriet rate?

Published by Thriftbooks.com User , 23 years ago
I would like to know how harriet can review this book when the publishers haven't released it yet.

Published by Thriftbooks.com User , 23 years ago
Pocket has compiled five wonderful short stories from some of the romance genre's top authors. Each tale is superb, fully developed, and will grip fans who like short romantic tales. Alabama Sheriff Jackson Brody hates a "Blue Moon" month because people seem to act crazier when the moon is full. Following up on some weirdness, Jackson meets local "witch" Lilah Jones in the back woods where the only electricity is between their hearts. Linda Howard scribes a winning rural love story. In 1883 Texas, Drew Coryell lives by himself on an island. His ex-wife arrives, needing a big favor. The "Castaway" wants to punish his beloved, but their love remains strong. However, is it powerful enough to thwart the interference of her father? Geralyn Dawson provides readers with a fabulous western romance. In 1843 Cornwall, her yacht crashed off of his cove. Rylan "Wicked" DeWilde never expected to fall in love with his guest Sydney Windsor. However, she is engaged to his enemy. Jillian Hunter adds gothic elements into her brilliant Victorian romance. In 1772 Massachusetts Colony, Miriam Rowes becomes engaged to steady Chilton Chuff. However, pirate Jack Wilder returns to claim his beloved. Miriam needs to decide which beau will treat her as their most precious treasure. Miranda Jarrett shows why she is the queen of the colonial romance. Private Investigator Jeremy Noble wants to see Jody Becket, but she has gone to Ocean City on a vacation. He grew up there, vowing never to return after the fire killed his family. Will he be able to go home to find love? Readers will be "Swept Away" by Mariah Stewart's wonderful contemporary. Great fun lies within this magnificent anthology.Harriet Klausner
Trustpilot
Copyright © 2022 Thriftbooks.com Terms of Use | Privacy Policy | Do Not Sell My Personal Information | Cookie Preferences | Accessibility Statement
ThriftBooks® and the ThriftBooks® logo are registered trademarks of Thrift Books Global, LLC