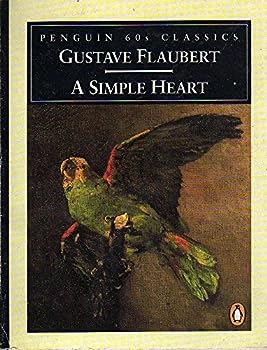 Vivid realism captures the attitudes of Felicite the housemaid and her life of domestic servitude in this deceptively simple tale. This beautifully packaged series of classic novellas includes the works of masterful writers. Inexpensive and collectible, they are the first single-volume publications of these classic tales, offering a closer look at this underappreciated literary form and providing a fresh take on the world's most celebrated authors...

Published by Thriftbooks.com User , 11 years ago
The product arrived in a timely manner and in good condition. I will remember this vendor for my future purchases.

Published by Thriftbooks.com User , 13 years ago
I love this book. It's somewhere between a novel and a short story, and I am enthralled by all of the detail. It's obvious that Flaubert concentrated on every single word, because not only did he write and scratch through 3 pg.s for every sentence, but avid readers and writers will be able to understand the affection he gave to la parole. Flaubert is now one of my favorites, because he is one of the best writers I've read so far.

Short But Powerful and Impressive

Published by Thriftbooks.com User , 14 years ago
Gustave Flaubert (1821 to 1880) was a French writer who is still considered to be among the greatest western novelists. He authored Madama Bovary which is considered to be the perfectly balanced modern novel. That novel and the author's style and approach has been hailed by a range of writers and critics including, for example, Saul Bellow, who modeled his own novels from Flaubert's works. Fluabert's writings have been referenced by Nabokov and many others as being an inspiration to a whole century of Western writers, and helped to launch the age of realism in novels. The present story comes from the 1877 publication Three Tales (Trois Contes. It consists of the short stories: Simple Heart, Saint Julian, and Herodias. Dance of Death is another story sometimes grouped with Simple Heart and Saint Julian as Three Short Works. A Simple Heart was inspired by biographical events in Flaubert's own life: he lived in rural Normandy, he had problems with his studies similar to the character Paul, and he was prone to epileptic seizures similar to the protagonist Felicite. I read the story first without looking at any analysis, made up my own mind, then read the analysis. What struck me was that Flaubert had crammed a whole lifetime of human emotions into a single very short story. That all by itself was impressive. How could someone come up with that idea? Amazing. A Simple Heart, also called A Simple Soul or Un Coeur Simple, in French, is a story about a girl named Felicité. She is a servant who has lived with the same family ever since she was betrayed by her lover. She has a strong sense of loyalty and self sacrifice: she lives to help others. This short story has been admired by many critics over the years and used as a basis or a source of inspiration for other stories. This takes only an hour or so to read and is highly recommended.

Published by Thriftbooks.com User , 15 years ago
Amazing writing. Sentence by sentence Flaubert takes you from a point A to a point B that you would deride as ridiculous if you were told that's where it's going at the start. We used this story at a library great books meeting once and the result was fantastic. Half of the group had one opinion of the main character and half had a diammetrically opposite opinion. It made for a great debate though everyone agreed that the story was magnificently written.