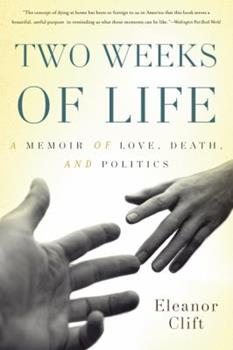 Two Weeks of Life: A Memoir of Love, Death, and Politics

What has become known as the Schiavo affair-the death of a brain-damaged woman in Florida in 2005, and the controversy that surrounded it-was a revelatory moment in American society. For the first time, the nation got a clear view of both the fanaticism gripping the religious right and the political power it could bring to bear even when the vast majority of the country disagreed with it. But it was also a turning point: a moment when America seemed...

Published by Thriftbooks.com User , 14 years ago
The other reviewers will speak better to the great qualities of this book, so I'll echo the best of them - a wonderful read that personalizes a national story with such heartbreaking and informative reporting that truly illuminates the theme that we are a country founded on questions in search of answers. A must read for any student of our political system as well as an enlightening introduction into the culture of hospice care. One of the most important memoirs published this year.

Two Weeks of Life provokes thoughts about how we die.

Published by Thriftbooks.com User , 14 years ago
Eleanor Clift has written a very thought-provoking book about her husband's death from cancer and its contrast with the very public controversy about Terri Schiavo's life and death at the same time. Questions about how we die and the right to choose that option in the face of terminal disease or being in a vegatative state are addressed. The courage shown by the terminally ill person and his or her spouse and loved ones is impressive. Eleanor Clift has always impressed me as a very caring and intelligent person and this book confirms that impression. A difficult subject treated very compassionately.

A Clear Look at Hard Facts

Published by Thriftbooks.com User , 14 years ago
You probably know Eleanor Clift, or at least know of her. On Sundays, she's the one being yelled at on The McLaughlin Group. Anyone who's seen that show knows she is a tough professional who stands her ground. This book proves it. Even in the hardest of times, Clift is a journalist to the core. She declares in the early pages that this is a love story, and indeed it is, as she records the love she shared with her husband, Tom Brazaitis, as together they faced his spreading cancer and eventual death. But it is more than a memoir. At the same time she is recording in precise and difficult detail the last two weeks of Tom's life lived peacefully in the living room of their home with the help of hospice, she tells of another story of life and death taking place in Florida--that of Terri Schiavo. Terri Schiavo's story dominated the news as her husband and parents debated the decision of continuing to sustain Terri's life. The governor and courts of Florida became involved, and then the dispute was taken to congress and the president. While Clift was caring for Tom every night, she was involved as a journalist and commentator covering the Schiavo controversy. Her husband, also a journalist, had insisted early on that Clift continue her professional commitments. She did. Now she has taken these two simultaneous events and combined them into an account that is both an intense personal memoir and a clear analysis of the hard decisions that face families when a loved one's life is ending. She gives her story clearly while she weaves in the Schiavo story in even-handed reporting. "I'm a journalist by training and instinct. That reporting is the vehicle for my journey to make sense of the physical, ethical and moral issues legitimately raised by both sides in the debate," Clift explains in the preface to the book. This is a difficult topic, but one that most of us will have to face at some point. While the book is serious and straightforward, it is not difficult to read. In fact, it is a pleasure both to share the personal story and to benefit from Clift's clear writing. The inclusion at book's end of several columns written for the Cleveland Plain Dealer by Brazaitis across the course of his struggle makes the story even more tender and personal. by Patricia Nordyke Pando for Story Circle Book Reviews reviewing books by, for, and about women

Published by Thriftbooks.com User , 14 years ago
Eleanor Clift, known to many Americans by her presence and prescient offerings on "The McLaughlin Group", has written a dynamic book paralleling the lives and deaths of two people in the early spring of 2005...her husband, Tom Brazaitis, and Terri Schiavo, whose lingering life and death were watched by millions. In "Two Weeks of Life", Clift recounts the final days of both individuals...one who died a relatively private death...the other whose family endured a demise which was both horrifying and unnecessarily public. Clift charts broad waters as she seeks and succeeds to give an overview of the times and how her own emotions were caught up with Tom. She tells of how hospice was looked upon in such craven ways as measured by the religious right's stepping over almost every conceivable boundary to "save Terri". Her accounts of Mary Labyak and the endurance tests she had to face as administrative head of Florida Suncoast hospice are chilling. Clift begins with an assertion that "this is not a political book, or at least it shouldn't have been", but knowing enough about the author one can only imagine it doesn't take her long to roll up her sleeves and opine...and she does so with gusto. On the Schiavo side we revisit the Congressional "call to action" with Governor Jeb Bush and President George Bush lamely trying to intervene...certainly a stain on the reputations of the entire Republican leadership. But she notes the Democrats were almost universally nowhere to be found, ending up with the whole operation as a bungled mess, at least politically. But Clift really shines as she relates her visits to Art Buchwald in hospice and the support she received from friends and colleagues on the McLaughlin program. Some of the funniest moments of the book occur while she is describing the back and forth food fight nature of the show. As the lone liberal and the only female, Clift's welcome voice is usually heard well above the din of the other guests. "Two Weeks of Life" ends poignantly with columns written by Tom as he proceeds through his years of treatment. Providing some good medical information about his cancer, balanced by Tom's own wit, Clift gives a bittersweet feel to a man I'm sure we all would like to have known. I'm only sorry there was not a photograph or two of Tom included in the book so that the reader could have a face to put to his writings. I highly recommend this book and commend Eleanor Clift for showing the differences in how death can be experienced in both public and private settings.

Published by Thriftbooks.com User , 14 years ago
A terrific book. Insightful commentary about the complexity of end of life issues brought to light through a poignant personal story juxtaposed against the highly publicized Terri Schiavo case that was the tipping point of the end of outright and shameless pandering to the Far Far Right...
Trustpilot
Copyright © 2022 Thriftbooks.com Terms of Use | Privacy Policy | Do Not Sell My Personal Information | Accessibility Statement
ThriftBooks® and the ThriftBooks® logo are registered trademarks of Thrift Books Global, LLC