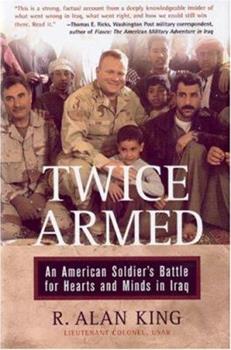 Twice Armed: An American Soldier's Battle for Hearts and Minds in Iraq

As unconventional as any soldier this side of T. E. Lawrence, R. Alan King was particularly well suited for the new kind of war being waged in Iraq. Armed with a Palm Pilot, a Koran, and a nuanced respect for Middle Eastern culture, King arranged the capture or surrender of almost a dozen of the most-wanted villains from Saddam's regime. He became privy to secrets as weighty as those of Iraq's nuclear weapons program and as light as those behind the...

A Strong Factual Personal Account of Situation in Iraq

Published by Thriftbooks.com User , 15 years ago
There have been many books written about the war and the present situation in Iraq by soldiers, reporters and politicians but author R. Alan King gives us an insider view that is seldom, if ever, reported. His memoir "Twice Armed: An American Soldier's Battle for Hearts and Minds in Iraq" takes the reader on a personal journey that opens up questions about what happened in Iraq and what is going on now. He looks at what went wrong, what worked and also points out what we should do in order to win the hearts and minds of those in Iraq. Seldom has there been such a riveting and insightful memoir that captures history right off the front pages of recent history. This book gives us a different view then what we have been getting from the TV or the newspapers or even from the White House. His dealings with local people show a sensitive social and religious tolerance that makes for good diplomacy and good soldiering. Men like King are certainly not common in the ranks. They should be treated as rare and valuable government assets but too often they are ignored. It amazes me that our leadership chooses to ignore such men and continues to pursue policies and actions based on their limited blinded understandings of the real world. It gives me some hope that perhaps there are other military minds out there who are making a difference. My fear is that we have lost the righteous momentum for solving the huge problems in Iraq and now are scrambling for any escape from this dangerous arena. I enjoyed reading Lieutenant Colonel King's accounting of his experiences in Iraq and his views on the situation there. I highly recommend his book for all American's to read. They might come away with a much broader and knowledgeable view of what is going on in Iraq and perhaps why things are as they are. This book deserves the MWSA"s top book rating of FIVE STARS! A MUST READ BOOK!

A riveting story evolves of his years of duty.

Published by Thriftbooks.com User , 15 years ago
TWICE ARMED: AN AMERICAN SOLDIER'S BATTLE FOR HEARTS AND MINDS IN IRAQ is for any American reader who would understand, from an insider's perspective, the magnitude of the military and social fighting taking place in modern Iraq. Author King is a war fighter and soldier who negotiated with numerous sheiks and clerics, earning their trust. He captured or accepted the surrender of nearly a dozen of the most-wanted Iraqi personalities from Saddam's regime, and yet was willing to practice the customs of the region so he could gain the people's trust. A riveting story evolves of his years of duty. Diane C. Donovan California Bookwatch

Published by Thriftbooks.com User , 15 years ago
I enjoyed this book very much - it was facsinating to read the stories of the "deck" captures and the sense of understanding the writer has about the Iraqi people and their culture. The writer conveys his story in such an amazing way! - I felt like I was right there with him as he served his country on foreign soil. Very well written and truly a great story to read.

Published by Thriftbooks.com User , 15 years ago
Twice Armed provides an excellent, balanced view of the US effort in Iraq. Alan King has taken advantage of his experience at the tactical and strategic levels to provide the American public with an apolitical view. Twice Armed, particularly when read in concert with other current publications on the subject, fills in the detail required to fully comprehend the complexities of Iraq and the Middle East.

Published by Thriftbooks.com User , 15 years ago
It is almost heartbreaking to read this book, to wonder where Iraq would be if men like Alan King would have been more involved on the ground and in the decision-making process at the Pentagon. He speaks the language, respects the culture, but also plays hardball when he needs to, and guess what? He gets results, fewer people get killed, and the bad guys in Iraq get caught. I could not put this book down. I hope he gets assigned to a think-tank at the Pentagon or White House soon so we can find a way out of the mess that is Iraq today. The stories he tells about catching the guys in the famous "deck of cards" are worth the price of the book alone, but you cannot help but imagine what might have been if more military personnel - at all levels - used their own faith, both in God and democracy and doing right - to respect the faiths of Iraqis and get their country on a path to working and not civil war. A great read and the best book on Iraq I have read of the 11 I own.
Trustpilot
Copyright © 2022 Thriftbooks.com Terms of Use | Privacy Policy | Do Not Sell My Personal Information | Accessibility Statement
ThriftBooks® and the ThriftBooks® logo are registered trademarks of Thrift Books Global, LLC