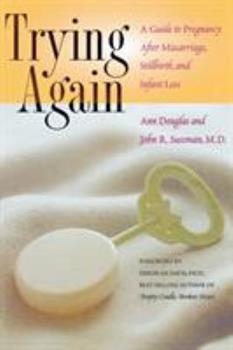 Trying Again: A Guide to Pregnancy After Miscarriage, Stillbirth, and Infant Loss

Trying Again lessens the uncertainties about pregnancy after miscarriage, stillbirth, or infant loss by providing the facts to help you determine if you and your partner are emotionally ready for another pregnancy. It also imparts essential advice about preparing and planning for another baby when you decide the time is right.

Published by Thriftbooks.com User , 20 years ago
My husband and I were told at our first prenatal visit (10wks) that we had lost our baby. One week out I was hungry for information on why this had happened to us. Having no friends that had been through this experience I looked to books. This book was great. I was able to see that all of my feeling were all right there in front of me and even some other feelings that I might experience down the road. This book was more helpful that others since it was well written for all stages of pregnancy loss, stillbirth, and infant death. Other books that I purchased did not make me feel that my loss was as important as those whose baby had died in their arms after nine months of pregnancy.

A "must read" if you are trying again.

Published by Thriftbooks.com User , 21 years ago
I wish I'd had this book four years ago when I first started "trying again" to have a baby. I am one of the parents interviewed for this book. It's so true that when you lose a baby so many well-meaning people urge you to try again - as if being pregnant again will make everything better. I too thought everthing would be better but in my case my efforts to try again resulted in two more losses. I too thought that everything would be better if I could just hold onto another pregnancy. When I became pregnant fear and anxiety were my constant companions. Reading Ann's book has given me a sense of normalcy. I certainly am not the only one out there whose pregnancy was 38 weeks of near panic. This is a book that acknowledges those feelings and gives you ideas for how to cope.The one area that I wish Ann had discussed was when you decide to stop "trying again". I had three losses before we had our precious 3 year old. We tried to get pregnant a fifth time and after a year finally decided to stop trying. That decision created another loss for us. Somehow our grief was deeper as we re-grieved all our losses and then grieved for the children we would not have.This is a good book. I have given copies to friends that are trying again.

This book was worth the wait...

Published by Thriftbooks.com User , 22 years ago
First, I must admit to a slight bias, as I was one of the bereaved parents, trying again, whom Ann Douglas interviewed for this book. Having eagerly awaited its publication, I can say that it is everything I was hoping to read and more. Losing a child during pregnancy or shortly after birth is a tragedy that few people can imagine until they have had the unfortunate experience of living through it. Many people urge the bereaved couple to "try again" (as if that will make everything all better). They often do not realize how the loss of the previous pregnancy colours every facet of trying or being pregnant again. As someone who has lived through the loss of a child and the birth of a subsequent baby -- as well as being a gifted writer on pregnancy and parenting issues -- Ann is uniquely qualified to explore every aspect of this largely unexplored subject. The book is thorough and presents lots of factual information, as well as the voices of bereaved parents who have made the courageous decision to try again to bring a living child home. For me, it was the stories and examples of these other bereaved parents that really "made" the book. I would highly recommend this book for any bereaved parent struggling with the decision to try again or going through a subsequent pregnancy, as well as those in a position to provide support to these brave couples.

Published by Thriftbooks.com User , 22 years ago
It is said that no loss in life affects us as deeply and profoundly as that which we experience when a child of ours dies. Whether the child is a 6-week-old embryo, a 39-week-old fetus, or a grown adult, the mother or father in us feels a sadness that is hard to understand, describe, or come to terms with. Making the decision to try again can be courageous, impetuous, desperate--and a supreme physical and emotional sacrifice. This book can help make the decision informed.Many books are available for people who are pregnant, who want to get pregnant, or who are grieving the loss of a baby. This book is different because it focuses on that fragile period between having lost a child and the decision to, and the act of, trying to become pregnant with another one. Instead of glossing over or whispering about death, this book faces this common experience head on, offering both compassion and practical information and advice about why this happens and how to go on from here. The personal accounts of the several women and men who went through miscarriage, stillbirth, and early infant death are especially helpful, because readers can understand that this experience is not uncommon--even though their emotional response to it may be unique.I wish this book had been available when I lost my first baby at 12 weeks into the pregnancy. It would have helped me get through the five months of grief, anger, resentment, guilt, and shattered trust and self-confidence that followed. I plan to give copies of this book to friends, and I strongly recommend this book to anyone who wants to try again.
Trustpilot
Copyright © 2022 Thriftbooks.com Terms of Use | Privacy Policy | Do Not Sell or Share My Personal Information | Accessibility Statement
ThriftBooks® and the ThriftBooks® logo are registered trademarks of Thrift Books Global, LLC