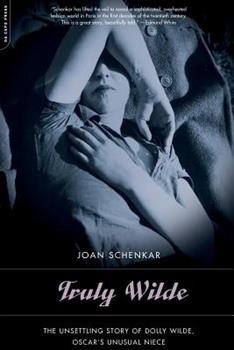 Born a scant three months after her uncle Oscar's notorious arrest, raised in the shadow of the greatest scandal of the turn of the twentieth century, Dolly Wilde attracted people of taste and talent wherever she went. Brilliantly witty, charged with charm, a born writer, she drenched her prodigious talents in liquids, burnt up her opportunities in flamboyant affairs, and died as she lived--repeating her uncle's history of excess, collapse, and ruin...

meaning without words...a wisp of a shadow

Published by Thriftbooks.com User , 18 years ago
How do you relate the life of someone who never stepped forward from the shadows of her disgraced uncle, Oscar Wilde? Someone who sparkled like a thousand shards of a broken mirror on a sunlit day? Dolly was a wisp of a shadow, mesmerizing, bewitching permanently etching herself into onto one's memory with her mere presence. Those who knew her well, Janet Flanner, Natalie Barney, Honey Harris - true wordsmiths all- struggled to explain her enigmatic aura. Captivating, enchanting - adjectives repeated over and over in a vain attempt to eplain her effect on all she met. Her magic was her brilliant conversation, her charming turn of phrase, the impermanence of flowing dialogue that she wouldn't or couldn't commit to paper. She lived and died in 'The Moment' nothing else mattered. Her flame burned bright and then was gone - a willing(?) or fated victim to excesses she could not (and would not) control and the ravages of a body aged long before its time. Suicide? accident? Murder? The myth and truth of 'Wilde' consumed her all the same. This biography isn't linear because Dolly didn't live her life linearly. Her life was moments of sight and sound and fury that the author captures completely. How do you truly explain the unexplainable? This book is at it's best a series of half glimpses, whispered hints, or even dim reflections in mirrors (Dolly hated mirrors)of someone so busy 'living in the moment' that after that glorious moment she was gone with only the faint trace of pleasure and grace. And somehow all that works and works well, this book recreates her life so much more then a dry recording of droning facts could ever capture of such a glorious spirit. No such dullness For Dolly Wilde! I highly recommend this book.

Published by Thriftbooks.com User , 21 years ago
This is a sumptuous biography; innovatively written, beautifully researched, lavishly illustrated, and completely revelatory - but you'd never know it from some of the reader comments herein. Why is it that people who have apparent trouble with sophisticated writing and new forms for biography so love to post their misunderstandings? I was working in London when TRULY WILDE was first published there. The media splash it made and the rave reviews it got - from such notables as Simon Callow, Jeannette Winterson, Edmund White, and Thomas Wright, to name a few - drew me to it immediately. But the Brits are used to experiments in biography; they have taken the form very far, and here in the States we seem to be plodding along with the same old linear forms to delineate the same old linear lives. Dolly Wilde's behavior was like mercury or lightening - she required whole new ways to describe her and Joan Schenkar has invented them. It is now our lucky turn to understand and appreciate Schenkar's methods and this is the kind of book by which readers themselves are judged.What one reader mistakes for "repetition" in TRULY WILDE is the kind of variation poets play on a metaphorical theme. Schenkar tells Dolly's story but from many different angles and with many different techniques: it's a brilliant way to render this many-faceted character and her complicated era and Schenkar's use of innovative techniques provides us with with all the pleasures of Dolly's life and all the delights of a biographer's art. This is the kind of book readers will want to savor and re-read for years. It's exquisitely written - fully up to its fascinating subject - and if you had 6 stars available, I'd give TRULY WILDE all 6.

Published by Thriftbooks.com User , 21 years ago
This biography of Oscar Wilde's tragically fascinating niece Dolly did for me what no biography in recent memory has done: it put me in the living, breathing, highly personalised presence of its subject, and then it introduced me to a whole era of brilliant women of extraordinary accomplishment. I'll be re-reading and thinking about TRULY WILDE for a long time to come; I couldn't recommend it more. It was absolutely fabulous.

not just of interest to lesbians and Wilde fans

Published by Thriftbooks.com User , 21 years ago
Dorothy "Dolly" Wilde was five years old when her uncle Oscar died in 1900 at the age of 46. But if anyone in the Wilde clan inherited his wit --- and his penchant for personal drama, sexual intrigue and an early death --- it was Dolly. She too died at the age of 46. In her case, though, a syringe and drugs were at her side.Until Joan Schenkar wrote 'Truly Wilde: The Unsettling Story of Dolly Wilde, Oscar's Unusual Niece," this fascinating woman was at best a footnote in books about chic lesbians. For Dolly never really did anything --- she drifted through salons and bedrooms, dispensing quips and sexual pleasure to the most celebrated lesbians in Paris and London. She was, says her first biographer, "an artist of the spoken word" --- and in 369 engagingly written, provocative pages, Schenkar proves it's possible to make us care about a woman who basically wasted her life.Despite the fame --- okay, notoriety --- of her family, Dolly's early years were not promising. When she was very young, her father drank himself to death; her mother handed her over to an aunt and then a convent. That set her on a lifelong path in search of a stable home. What she found instead was Natalie Clifford Barney, a rich, wickedly witty American who seemed to welcome every artist of note into her Paris salon and every lesbian of note into her bed.Barney's home --- and the London and Paris living rooms that Dolly loved --- was a stage set where Dolly shone. Someone asked: What will you do today? Her response: "Probably nothing but hesitate." A cousin wondered: What's made you so thin? "Requited love," she replied.As a writer, Dolly's skills never really took her beyond letters. But what letters! Luckily for Dolly, Schenkar discovered 200 of her missives in an obscure library in Paris. In the absence of more sustained writing or accounts of Dolly's life by friends and lovers, these letters serve as an outline of her autobiography. There was nothing ordinary about the life Dolly describes; she seems never to have done a single chore. Nor, for that matter, did she ever buy stationery --- she preferred the writing paper from the hotels and private homes she visited. "Darling, wait for me with open arms and let me fall breathless into them," she'd write. And you don't need much imagination to guess the reaction of her recipient.Letter-writing was the closest she came to a discipline. In every other way, she was hot-wired to the moment and the pleasure it might bring. She lined her eyes with kohl and so impressed F. Scott Fitzgerald that he put her in a scene --- later, he cut it out --- from Tender Is The Night. She was a character: She ate the little knots off the top of a brioche. Was she constant about anything? Not really. Even when she was committed to a relationship, she never forgot that sex with others could be rationalized as "the logical conclusion to admiration." But a personality built on eccentricity, seduction and quips needs constant replenishment. Dolly to
Trustpilot
Copyright © 2022 Thriftbooks.com Terms of Use | Privacy Policy | Do Not Sell or Share My Personal Information | Accessibility Statement
ThriftBooks® and the ThriftBooks® logo are registered trademarks of Thrift Books Global, LLC