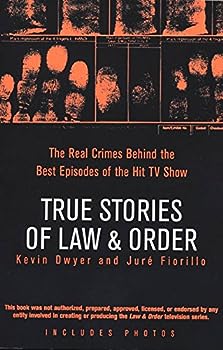 True Stories of Law & Order: The Real Crimes Behind the Best Episodes of the Hit TV Show

by Juré Fiorillo and Kevin Dwyer

True Stories of Law & Order reveals the fascinating and shocking facts behind 25 of the hit show's most popular episodes - from the incredible account of how a woman's repressed memory leads to the... This description may be from another edition of this product.

Published by Thriftbooks.com User , 14 years ago
Very good book, with the actual crime investigations that inspired the best episodes of Law & Order.

Published by Thriftbooks.com User , 14 years ago
Although the book has little to do with the actual LAW & ORDER shows, it does a great job of going "behind the scenes," as it were, of 25 of the show's episodes to explore the true crimes they were based on. These aren't stories for the faint of heart, but they do pull at the heartstrings. I remember watching many of the episodes the crimes were based on. This is a great book, especially for those interested in true crimes, but anyone will find them fascinating. The authors have truly done their research and are to be commended.

Real stories of crime will stir your emotions

Published by Thriftbooks.com User , 15 years ago
As a fan of the Law & Order series, I was intrigued by the title. The book actually does not have much to do with the television series franchise, but the true stories inside are presented in a way that any fan of the television series will enjoy. Included are twenty-five true stories on which episodes of Law & Order are apparently based. These include the Liverpool murder of two-year old James Bulger by two 10-year old boys, the story of Jack Abbott, the protege of pulitzer-prize winning writer Norman Mailer, who stabbed aspiring actor Richard Adan to death over the use of a diner restroom; and the murder of Gulf War vet Anthony Riggs, killed by his wife and brother-in-law over life insurance proceeds. Reading this book is like watching 25 short episodes of law and order, except that these ARE the true stories, with the real names.
Trustpilot
Copyright © 2022 Thriftbooks.com Terms of Use | Privacy Policy | Do Not Sell My Personal Information | Accessibility Statement
ThriftBooks® and the ThriftBooks® logo are registered trademarks of Thrift Books Global, LLC