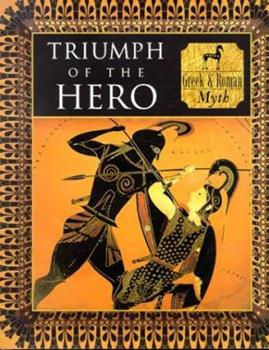 Triumph of the Hero: Greek and Roman Myth (Myth and Mankind)

(Part of the Myth and Mankind Series)

Text and illustrations provide an introduction to the myths and legends of the Greeks and Romans. This description may be from another edition of this product.

Published by Thriftbooks.com User , 14 years ago
The stories in this book give an elaborate overview of Greek myths as well as a look into the many examples of Tragic hero present in GreoRoman mythology. From Odysseus to Aeaneas to Jason to Agamemnon to Orestes to Oedipus The greeks have known tragic story after story and this book does an excellent job of covering them all; from the more well known myths to lesser known myths the book presents a vivid presentation of the two cultures and their emphasis on the importance of the hero. As well the book gives a good amount of extra information on the heroes as well as parrale structure between myths and the effect that they have had on present day culture. A purely awesome book and one of the best in the series. I would highly recomend the rest of Timelife's Myth and Mankind series as well.
Trustpilot
Copyright © 2022 Thriftbooks.com Terms of Use | Privacy Policy | Do Not Sell My Personal Information | Accessibility Statement
ThriftBooks® and the ThriftBooks® logo are registered trademarks of Thrift Books Global, LLC