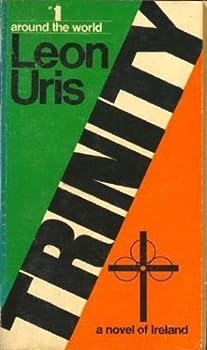 Leon Uris's beloved Irish classic, available in Avon mass market. From the acclaimed author who enthralled the world with Exodus, Battle Cry, QB VII, Topaz, and other beloved classics of... This description may be from another edition of this product.

Published by Thriftbooks.com User , 16 years ago
What makes Leon Uris a gift to modern American writers is his ability to allow himself to become totally engrossed in the story which, in turn, draws the reader in with him. In this book Uris' love for the Irish people comes to fruition as he chronicles the early days of the Irish rebellion against the English colonial occupation. Unlike his other works such as ARMAGEDDON-where he tries to set forth all points of view regarding a subject-he does not even try to justify the partisan politics of Ireland; the English are bad, the Irish are good. Whether or not you agree with this one-sided mentality and how he represents the political and religious quagmire that is (and was, and probably always will be) Northern Ireland, this is still a great book. This was the first Uris book I ever read and this made me an instant die-hard fan. The characters are engaging and endearing, almost making you miss then and resent the book for having ended. The prose is also vintage Uris (this was when he was playing around with multiple narrators and time-frames and yes, he is at his best in this book). But what gripped me was that I had to take a step back and remind myself that Uris is an outsider to this history and these people-as an American Jew he is extremely sensitive to the subject which makes it all the more engaging. The book is about 800 pages long, so if you are new to Uris you may want to start with something smaller such as MILA 18 or QB VII. But then again, this book is a testament to Uris' talent for detail and heart-warming characters caught in heart-wrenching events, so don't be shy, the summer is long and so is this book. Sit in the sun and enjoy! *Disclaimer*: if you get a little emotional with good books (like me) you may want to keep some Kleenex handy for the last chapter.

First Stopped, Then Started My Heart

Published by Thriftbooks.com User , 18 years ago
I read this book from start to finish while sitting on the floor of my bathroom, leaning up against the tub (it was the only room in my apartment with a heater). Around the 400th page I dropped it in a full tub of water by accident, then held the individual pages up to the light so I could continue reading. The last 15 pages took me 2 hours to get through because I was sobbing convulsively and couldn't see through my tears- the words were THAT powerful.Not only did Uris do an incredible job of helping me understand the basics of 19th century Irish history and events, but both the truth and fiction of the novel connected me to the subject like nothing I've ever experienced. The revelations I had as a result of reading "Trinity" have altered my life permanently. While I always "felt badly" for oppressed cultures, since reading "Trinity" I understand more internally how heartbreaking it can be to live as a member of a subjugated and abused people. Though I have to admit my first instinct upon reaching the last page was to try at all costs to join the IRA (as irrational and impossible as that is), when the tears finally stopped I reluctantly admitted to myself that that was an entirely inappropriate way of directing my anger and adopted pain. Instead, to this day I wish I could go a hundred years back in time and dedicate myself to one of the only causes I know in my soul to have been not only righteous- but not, as Conor feared, hopeless. Since that is impossible, I'm actively looking for a cause that grabs me in a similar way as does the Irish struggle for freedom. Somehow, after reading "Trinity", I'm not as excited as I once was when "Seinfeld" or "Gilligan's Island" comes on TV (not that they don't still make me laugh!)... and that's a good thing. As silly as it sounds, "Trinity" has helped me get a better handle on what are the more important and fulfilling things in life.If I were the ruler of the world, I would insist that every high school student take a class that picks apart this novel and the concepts it addresses. For anyone who likes to sit and ponder, or yell indignantly, or reach out with their heart, this novel is perfect. Aside from the issue that is Ireland, Uris forces into one's full consciousness the many facets of humanity's ability for evil and good, selfishness and selflessness, and all the other feelings and ideas that make the world what it is.PS. "Redemption" is the perfect title for "Trinity"s sequel. While in some ways I found it disappointing (there were some incongruities in the complete storyline, and quite a bit of repetition regarding Conor), there are several scenes that made the read very worthwhile. "Trinity" left me overflowing with emotion and a need for "more"; "Redemption" left me content- the circle was completed, and that completion gave me reason to smile. And, if nothing else, the story of Gallipoli is fascinating, horrifying, and an important chapter in the military and colonial history o

Published by Thriftbooks.com User , 20 years ago
I can't remember being fascinated by a book for quite a long time. But on reading Uris' story of Ireland, I was. "Trinity" covers roughly the thirty years after the 1880s and tells a story mainly about the leading character Conor Larkin, who - being the son of a proud Catholic landowner in the village of Balleytouge in Northern Ireland - becomes more and more involved in the conflict between Protestants and Catholics, Republicans and Loyalists. The author's skill to melt the personal story and the nearly documentary background of especially the Ulster province into one is brilliant. Thus, there's nowhere the clear- cut contrast between the English and the Irish, revealing lots of more facets of a conflict of old. Conor's commitment to the Irish cause is against his own will, leading him into personal tragedies as well. Trinity is a story of love and hate, richness and poverty, freedom and bondage. What makes it outstanding, is its authenticity. The last chapter's heading is: a terrible beauty. This is, what could also be the best definition of the whole book as well. Whoever starts it, will not wish to lay it aside until he's read the last page. A really great book!

It is an excellent read.

Published by Thriftbooks.com User , 22 years ago
Having read this book,I have come to the conclusion it really gives a complete insight into a definite period of Irish history. For example, it clearly distinguishes three very different families. A nationalist, a unionist, and a family of aristocracy. We read how these families think and behave in very different ways. The nationalist family tend to see the situation from a purely Irish point of view. The unionist see things from a British and Irish point of view. Whilst the aristocrat family see things purely in a British way. So the story enlightens us of what is like to live in a land where there is conflict of interest. The author, it seems has done deep and much research before writing this book. One living in Ireland can easily recognise the existence of such families. Therefore it is not diffcult to realise why this country continues to exist in a state of uneasiness. Finally the author should be congratulated on his work and on his insight to the Irish way of living and life. Mr. Sean Haynes
Copyright © 2022 Thriftbooks.com Terms of Use | Privacy Policy | Do Not Sell My Personal Information | Accessibility Statement
ThriftBooks® and the ThriftBooks® logo are registered trademarks of Thrift Books Global, LLC