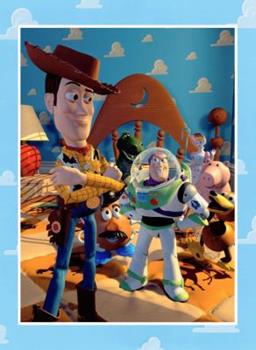 by Steve Daly and John Lasseter

With the premiere of Toy Story in 1995, a new era in the history of feature film animation was born. The first-ever computer animated full-length motion picture, Toy Story was the extraordinary result of a unique collaboration between the Walt Disney Company, the leader in traditional animation, and Pixar, the award-winning computer animation studio. Author Steve Daley teams up with director John Lasseter to tell the story of how these two visionary...

A Perfect Guide to How the Pro's Do It

Published by Thriftbooks.com User , 23 years ago
After seeing the film, the book was a natural progression. As a teacher of computer animation, Toy Story has enabled my students and I to study a piece of work which has very few flaws, other than the one's talked about by the animators and directors themselves. For a student of the art of animation, the book gives a superb insight into how an idea is developed from conception right through to production. Explanations are concise and clear and illustrations are comprehensive and in most cases beautiful. If you are embarking on a career in computer animation, buy this book!

"Art of Animation" is bigger and better than ever

Published by Thriftbooks.com User , 24 years ago
The latest version of Hyperion's popular book, "The Art of Animation," will soon be available in bookstores. Bob Thomas, the author who wrote the original "Art of Animation" back in 1958, has merged the existing versions of his book with previously unpublished interviews with Walt Disney and new material from Disney's upcoming "Hercules" to create a chronicle of Disney animation that is bigger and better than ever. & lt;P & gt; The new edition of Thomas's book is entitled "Disney's Art of Animation: From Mickey Mouse to Hercules." Whether or not you own an earlier version of the work, the Disney fan in you will find this new book interesting and worthwhile. & lt;P & gt; As in the past, "Art of Animation" is split into two parts. The first half is dubbed "History of a New Art," and its nine chapters recount the history of animation, particularly the pioneering work of Walt Disney and his studio. The second portion of the book is called "The Making of Hercules," a
Copyright © 2020 Thriftbooks.com Terms of Use | Privacy Policy | Do Not Sell My Personal Information | Accessibility Statement
ThriftBooks® and the ThriftBooks® logo are registered trademarks of Thrift Books Global, LLC